Here Is Why JetLite Does Not Exist Any More

Why did Naresh Goyal snuff out his low-cost carrier JetLite? 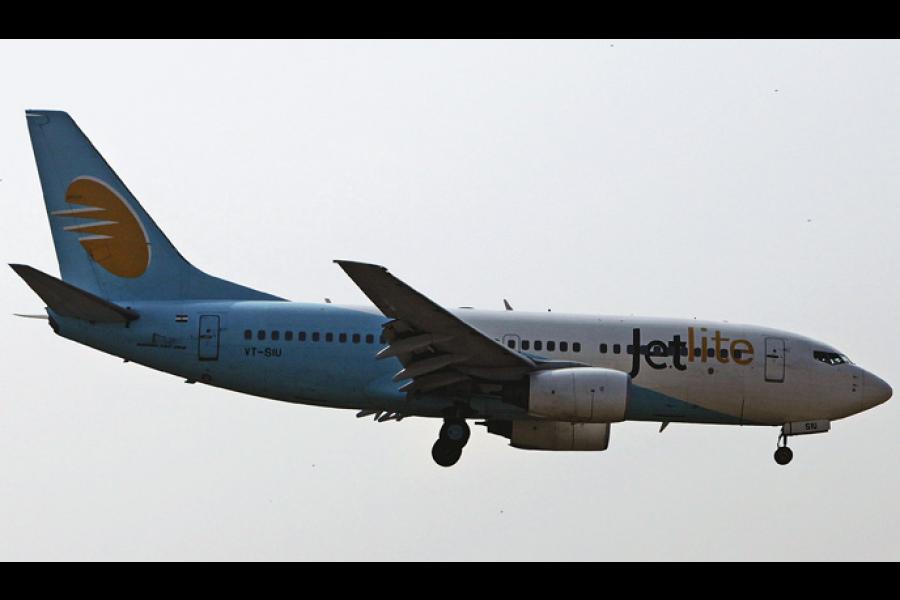 It’s an airline in transition. And no one feels it more than Jet Airways’ cabin attendant Sushmita D.  Depending on her roster, it is, “What meal would you like to have sir?’’ on some days. And “What meal would you like to buy Sir?’’ on others. These days, it can be a bit confusing with both lines being delivered on different flights the same day. Sushmita has been with the airline for about four years and is getting used to either selling a vegetarian meal for Rs 200 on JetKonnect flights, or dishing it out gratis with a smile, on Jet Airways. Her dilemma, in some ways, reflects that of India’s largest airline, as it tries to straddle the full-service and low-fare models—trying out, these days, a hybrid model along the way.

Last month, Jet Airways extinguished JetLite, one of its two low-fare brands that had been created to operate Air Sahara, bought about seven years ago from Subroto Roy. The other, JetKonnect, launched in 2009, is now the low-fare brand with more than twice the number of seats on offer than Jet Airways on the domestic routes. Cabin crew and uniforms are common on both brands, though the aircraft liveries are different. JetKonnect competes head-on with IndiGo and SpiceJet, the two largest low-cost carriers (LCC) in the country—but it is not a pure LCC like them. All the JetKonnect planes (sourced from the erstwhile JetLite and Jet Airways) will have a small business class cabin, called JetKonnect Premiere.

Jet is reconfiguring the JetLite planes, to carve out a business class that the planes did not have earlier. So, even while catering to the price sensitive Indian customer, Jet is also trying to scoop up its original constituency of business class passengers in the front of the plane. Operationally too, the low-fare airline does not work like a typical LCC. So will this strategy of straddling two separate worlds work?

That’s not all. In another six months or so, if it continues to grow at the same pace, IndiGo could overtake Jet as the country’s biggest domestic airline in terms of market share. So, will Jet’s new avatar be able to slow down IndiGo’s runaway growth?

That’s far from clear at this stage.

Having a separate business class certainly increases the complexity in any airline operation. Business class passengers—no matter how few they may be—are served up all the frills: Meals on linen, hot and cold beverages, plus on-ground facilities like special check-in and lounges. “The truth is that we are seeing a number of passengers who are willing to pay more [around 1.5 to 2 times the economy fare] to travel business class. This obviously helps shore up the margins on every Konnect flight. Already, the yields are much better than on JetLite, the pure economy carrier,” says Nikos Kardassis, CEO, Jet Airways.

When most of the network became single class, the sudden removal of business class seats from many Jet Airways flights had left many core Jet passengers, mostly business people, upset with the airline. “We are trying to make sure we cater to these premium passengers,” says Kardassis.

The long-term strategy has been much debated within the Jet Airways board and senior management for the past several months. In the end, the decision to stick to a business class was influenced, to a large extent, by the fall of Kingfisher Airlines. “This has created a vacuum in the business class, with close to 4,000 business class seats a day [from Kingfisher’s peak] being pulled out of the system,’’ says Madhav Oza of Blue Star Travels, a Mumbai-based air-ticket consolidator. Customers wanting to fly business class have no other option except Air-India and Jet Airways, says Oza. Though having a two-class configuration may not do much for costs, it certainly increases the yields (or margins) for Jet Airways.

The hybrid model
Apart from offering eight business class seats on every flight, JetKonnect also differs from pure-play LCCs in many other ways. A majority of the booking is still through the travel agent network; the airline also uses Sabre, a global distribution system to sell its ticket inventory. The GDS company has to be paid for every ticket segment booked through it and so do the agents. 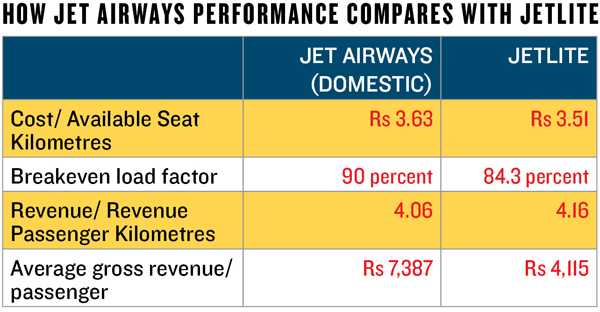 Jet has found it hard to resolve whether the GDS option should be cut out or retained. In the end, it has stuck to it because the advantages of the GDS cannot be denied, said a senior official in the company. Jet has a growing international network and many of the customers book through the network. “Its not point-to-point, like an LCC,” he says.

The economy leg of JetKonnect is not a hybrid formula. “It is pure LCC,” says Kardassis. But purists in the low-cost business, including IndiGo founder Rahul Bhatia, say that low cost has to be embedded in the DNA of the airline. Whether that’s the case with Jet is still unclear.

Meanwhile, the Mumbai-based airline is relentless in its drive to cut costs. Jet’s cost per available seat kilometre (CASK), a standard metric used to measure airline costs, on the domestic network, was up to Rs 3.63 in the Sept-Dec 2011 quarter, compared to Rs 2.90 in the same period in 2010. The increase was mainly because of higher fuel cost. All major contracts with vendors and suppliers are being re-negotiated around the world. What is untouched is employee wages or jobs. The airline got into a pickle with political parties when it last tried to sack cabin crew in the downturn. The strategy has been not to replace existing staff when they quit, particularly cabin crew.

Whatever the model, Jet’s management will have to find the final solution soon. The airline has notched up losses of Rs 937 crore in the first three quarters of 2011-12. The painful journey into the black will need a lot more than just cost cutting.