Lighting Up the Last Mile: Fibre Optics are the Way Forward

Optical fibre may be the only way ahead to provide high-speed Internet. But the business case looks tough in the short term

There’s a telecommunications crisis brewing in India and it has nothing to do with 2G, 3G or even 4G. India’s communication infrastructure at the ‘last mile’ — the part that connects your home or office to a communications provider — is rotten.

A December 2010 report by the Telecom Regulatory Authority of India (TRAI) says that of the 40 million copper loops (that cover the last mile) countrywide, only half are considered usable for broadband Internet connections. This most widely used medium, twister copper wires owned mostly by BSNL or MTNL, are largely old and inadequate for carrying data. Since very few telcos are putting any fresh copper in the ground, the number of usable copper loops for broadband in the country is expected to run out by 2014. 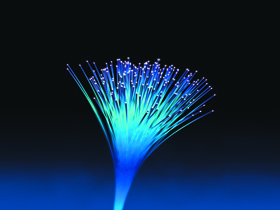 The next best option, coaxial fibres that take cable TV into 80 million households, carry mostly low bandwidth analog signals and are managed by thousands of small entrepreneurs with neither the capital nor the knowledge to use them for data. At present, barely 10 percent of them are equipped with the support infrastructure that will make them capable of two-way data transfer, required for broadband.

It is therefore a widely held view in telecom that 3G or 4G wireless technologies are the best way forward, as they don’t require roads to be dug up or wires to be strung. But, unfortunately, because of government flip-flops over policy, no operator is anywhere close to getting the required spectrum for providing good quality broadband to millions of consumers. For instance, TRAI estimates that in Delhi a wireless operator relying on even newer technologies like LTE or Wimax will require 280 MHz of spectrum to match the city’s broadband requirements by 2012. Instead, in last year’s auctions, operators were allotted a mere 20 MHz.

Why Fibre Works
The likely solution to this problem lies in the work of a Punjabi scientist who, in the 1960s, chanced upon the concept of transmitting light through thin and bent glass tubes after learning that light could travel only in straight lines. If optical fibres had a father, it could well be Narinder Singh Kapany.

Kapany’s discovery is today fast becoming the medium of choice for many Indian service providers. Enterprise communications provider Tulip Telecom says it has laid more than 6,000 km of optical fibre across 300 cities over the last two years, all of it at the last mile level. State-owned BSNL is offering fibre-to-the-home (FTTH) broadband in cities such as Hyderabad, Jaipur and Vadodara with speeds of up to 1 Gbps. This comes at a cost of Rs. 3,000 to Rs. 50,000 a month, but at speeds of up to 100 Mbps. Radius Infratel, a Delhi-based broadband infrastructure provider, signed a contract with Ericsson to connect 6 lakh homes and businesses with optical fibres across India.

The reason is simple: Optical fibre is really the only choice for high-speed data connectivity in the future. “I can carry anywhere from 4 GB to 16 GB in every core of the fibre. The capacity of the fibre is limited only by the choice of terminal equipment, which means I can offer unlimited bandwidth to my customers,” says Lt. Col. (Retd.) H.S. Bedi, Tulip Telecom’s chairman.

While near-infinite capacity over the long term might be a great proposition for service providers, the flip side to optical fibres is a near-impossible business case in the short term.

Fibrenomics
The cost of optical fibre has been falling rapidly over the years with costs today being around Rs. 30,000 a kilometre. In fact, the protective polyethylene pipes are more expensive. A larger chunk of the cost — on average Rs. 1.6 lakh a km — is incurred on digging and filling roads and laying cables. 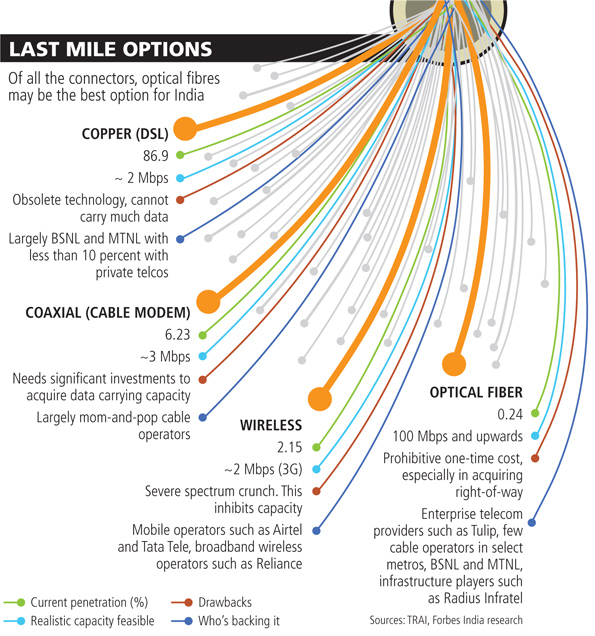 Infographics: Hemal Sheth
But the largest cost, and the biggest inhibitor to operators laying more optical fibre, is the money to earn ‘right of way’ — the money paid to municipal authorities for permission to dig up roads. This cost can vary from tens of lakhs in cities to Rs. 1 crore for a kilometre in densely populated business districts of Mumbai. “In cities such as Mumbai, the city municipal corporation looks at this as a source of revenue. It is a huge deterrent to service providers,” says Vish Iyer, head of Cisco’s service provider offerings in India.

“One of the factors holding back cable operators from laying optical fibre is the restrictive regime of TV channel prices in India. In a capped price environment, an entrepreneur who cannot sell higher value products will not want to invest in additional infrastructure,” says John Medeiros, deputy CEO of the Cable and Satellite Broadcasting Association of Asia, or CASBAA.

There are also topographical factors that complicate the last mile game. Delhi has more individual homes while Bangalore has more apartment blocks. It’s easier to connect apartments in a building than individual homes.
One factor that might, however, change the return-on-investment equation in favour of optical fibre is the National Broadband Plan released by TRAI in December 2010. The plan envisages government-owned national and state-level optical fibre authorities that will install and maintain shared optical fibre networks across most Indian cities, towns and villages at a total cost of Rs. 65,000 crore.

The plan also calls for installing FTTH connections in the 63 biggest cities and fibre-to-the-kerb (FTTK) connections in all other cities. Service providers of all varieties can then lease capacity on this network instead of laying their own optical fibres.

From Bane to Boon
But the TRAI plans could meander around for years before fructifying. Till then, optical fibre at the last mile will be a source of competitive advantage to those who manage to install it. Not only is it expensive and cumbersome to lay optical fibres, its next to impossible to dislodge an incumbent who’s spent the money and effort in getting his own optical fibre running into a customer’s offices.

“Today, there is inter-city optical fibre available from nine different players on a pan-India basis. With just two to three percent of capacity being utilised, I would say there’s unlimited availability. But there’s nothing available on the last mile,” says Bedi.

(This story appears in the 11 March, 2011 issue of Forbes India. To visit our Archives, click here.)