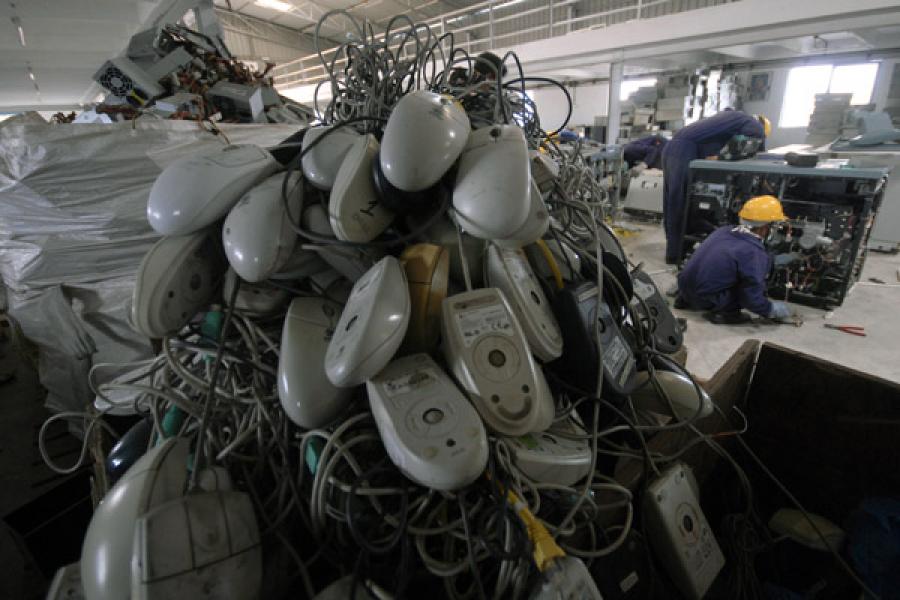 The new rules issued by the Ministry of Environment and Forests (MoEF) on May 1, 2012, for the disposal of electronic waste (e-waste) is a welcome relief for an industry that is organised for businesses and unorganised for the individual consumer.

Many vendors exist to handle largescale e-waste, and they say less than one percent of their business comes from individual consumers. This ruling has got the industry wondering how it will get the consumer on board.

Currently, the Central Pollution Control Board has said that India is expected to exceed 8 lakh tonnes of e-waste this year, which is double of what it was last year. Industry estimates say 70 percent of e-waste generated is from businesses and 30 percent from consumers. While businesses have organised forms of disposing their e-waste, the challenge that lies ahead is the consumer. Here is where the new rules could make a difference if seriously implemented.

The 2011-2012 annual report of the MoEF says, “Producers are required to set up collection systems and meet the costs involved in the environmentally sound management of e-waste generated from the ‘end of life’ of their own products.”

These rules call the producer to have an Extended Producer Responsibility (EPR). Now, producers are supposed to bear the cost of creating awareness among its customers as well as disposing their products in an environmentally-friendly manner. This goes above and beyond their current role of being with the customer until the warranty period expires.

Companies like Dell India have had programmes in place where a free pick up of the product along with free recycling is provided to customers who ask for it. Upasana Choudhry, environmental manager, HP India, says: “In 2011, we have had 1,821 enterprise consumer touch points across 150 cities using our e-waste pick-up option. We have been working towards expansion of the programme to include more cities and setting up more drop-off locations to achieve coverage over 20 states.”

But one challenge here is that the onus of getting the product recycled still rests on the consumer, and the temptation of selling it to the technology raddiwalla and making a little money does exist. This poses trouble for both the manufacturer and the environment as the responsibility of the end-of-life cycle rests on the manufacturer’s shoulder, not the consumer, and the raddiwalla may not dispose of it in a scientific manner.

Nitin Gupta, co-founder & CEO, Attero Recyling , an e-waste recycling firm that has received funds form private equity players, has one solution. He says, “Customers in Europe pay a fee for recycling to the company, which covers any marketing costs the company bears towards promoting recycling and selling it to the firm that will dispose of the product.” The key is to incentivise the customer to ensure e-waste is managed well as not everyone is convinced that consumers contribute only 30 percent to India’s e-waste.

“I feel it is more than 30 percent,” says Priti Mahesh, project manager, Toxi Links , an NGO, who points out that the only numbers available for any understanding on the e-waste produced are only five years old. These numbers take into account only televisions, mobile phones and computers. The new rules, according to the annual report, now include refrigerators, washing machines and air-conditioners, which was not included in the earlier tabulation of e-waste data. Also, personal consumption is unaccounted for and it may have increased over the years with the introduction of smartphones and tablets and its increasing affordability. Gupta says, “The consumer side may be five times the B2B e-waste market.”

Irrespective of the uncertainty of numbers, the ruling has BK Soni, founder & CMD, Eco Recycling Limited , one of the oldest practitioners of the organised e-waste trade in India, cheering. He broke even only in FY11 after opening shop in 2005. Now, he looks forward to the years ahead and says, “I expect business to double this year because this has been made mandatory, and business should go up five times by FY14.”

While Soni is rejoicing, he is not breaking out the champagne bottle yet as he says it will take true implementation of these rules to make this industry thrive. But with the implementation, three things are definitely going to happen.

One, the government is going to hold companies accountable for e-waste management and handling. This could be a good solution by the government as this will cause companies to spearhead recycling initiatives and drive consumers to become more responsible. Perhaps companies could incentivise customers by offering a 10 percent discount on their next purchase if customers recycled their products. Two, players in the e-waste sector like Soni, who have been on the recycling bandwagon long before the rules came into effect, can look forward to the industry moving from an unorganised to organised sector; at least where the consumer is concerned. Three, if you never knew where to go to get your e-waste recycled, you will know where to go by the end of this year.