The Lure of the Pink Rupee

It is not just the gay community and its supporters that are cheering the re-look at section 377 of the Indian Penal Code. Joining the celebrations are innovative businessmen who foresee a direct upswing in their top lines because of the New Delhi High Court’s move to decriminalise homosexuality. The increasing numbers of people coming out of the closet due to this ruling are part of an attractive
consumer segment.

Consider this: In July, Facebook had 35,000 openly lesbian, gay, bisexual and transgender (LGBT) members in India. After the High Court verdict the number doubled. On planetromeo.com, the world’s top gay Web site, 40,845 subscribers are from India, and the number doesn’t take into account LBT individuals. But just how great is the purchasing power of the LGBT community in India? How strong is the “pink rupee”? 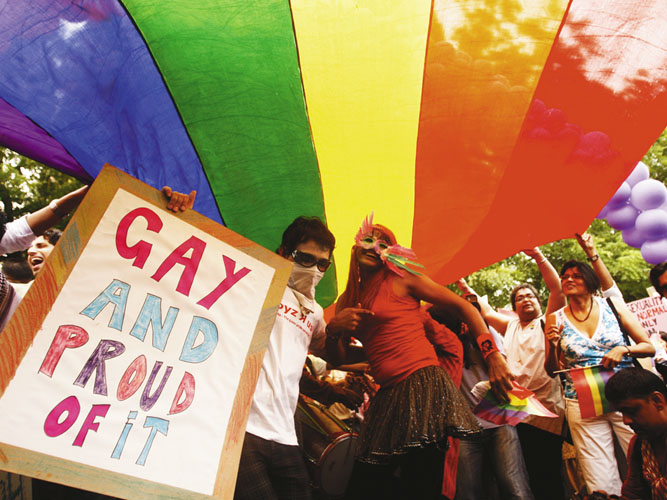 Image: Buddhika Weerasinghe/ Reuters
COMING OUT: After the High Court Verdict, Facebook's LGBT members in India have doubled
Estimates extrapolated by Forbes India, with help from Out Now Consulting (a marketing consultancy specialising in this sector)  puts the percentage of Indian adult population that is LGBT at four percent, amounting to 30 million people
That number may look small but these guys can spend. According to Ian Johnson, Out Now, the annual earning for these 30 million gay people is Rs. 1.5 lakh crore. Places such as Philadelphia have benefited tremendously by catering to this segment. According to the findings of a study by the Greater Philadelphia Tourism Marketing Corporation, which is considered the most successful gay marketing campaign in the US till date, for every dollar invested in gay tourism, $153 was returned in direct visitor spending by the gays. That’s some multiplier!
In India, the decision on 377 has caused small businesses that cater to the LGBT community to spring up across the country, and multi-national companies and large Indian firms to increase their gay-focussed marketing efforts.
For one business pair, the bet has already paid off. Sabina and Simran launched Azaad Bazaar, the first LGBT online store in July 2009. “We believe the most powerful force is the power of economics. In a country where one religious community can sell to another, a straight person can also understand that there are volumes to be made, people to be targeted, and they are seeing the value of it.”  Azaad Bazaar has grown 50 percent in terms of sales since they launched three months ago, and they plan to open their own store in Mumbai and sell through other shops in Delhi and Pune soon. And at least half of Azaad Bazaar’s consumers at exhibitions are actually straight, showing that LGBT-targeted marketing is not isolated to just that consumer.
Larger corporations such as Virgin Mobile, Hindustan Times and Levis jeans have also increasingly used LGBT friendly messages to promote their brand in advertisements, with taglines such as “It’s time to open our minds”. The film Dostana, though garnering a mixed reaction from the gay community, showed Bollywood wanted to cash in on the market. The thought is that it pays to be LGBT friendly, as many of these consumers are “DINK” — double income, no kids — and thus have a greater disposable income. The US LGBT market is $600 billion, for example, and 90 percent of that market shuns actively anti-gay companies.
Pallav Patankar, head of sales and marketing for Bombay Dost Magazine, estimates that LGBT parties in India (many which happen every couple weeks) can rake in Rs. 50,000 a month. “Restaurants are happy to host gay parties because these customers are single, don’t have to worry about going home early, and have a higher disposable income; so they spend a lot and stay late. Also, gay consumers don’t mind paying extra because it is a safe space.”
Nukul Munim, co-founder of Salvation Star, which hosts gay parties, proves the DINK theory with his party’s price tag. Munim and his partners charge entrants between Rs. 900-1,200 a night. He says Salvation Star is currently just meeting expenses, but that the restaurant takes a big cut. “When they host these kind of events, it sends out a signal that the space is gay friendly and the gay community continues to frequent it.”
Several gay partiers also say that restaurants and clubs such as Liquid Lounge and Bollywood Mischief in Mumbai used gay-theme parties to boost revenues and increase profits.
Gay Bombay head Vikram Doctor insists media and activists are hyping up this market. “The parties don’t make that much money. And you can’t just say ‘the power of the pink rupee’ because then you assume it is a uniform market.” But Doctor acknowledges that there are profitable LGBT businesses, such as Azaad Bazaar, which he says is an example that “small niche markets are possible”. He also emphasises that the most profitable businesses are actually the “unglamorous” ones.
One of these is the business of making babies. Doctor gives the example of iwannagetpreganant.com , an LGBT-friendly Web site and clinic that caters to foreign gay couples who are interested in having children. 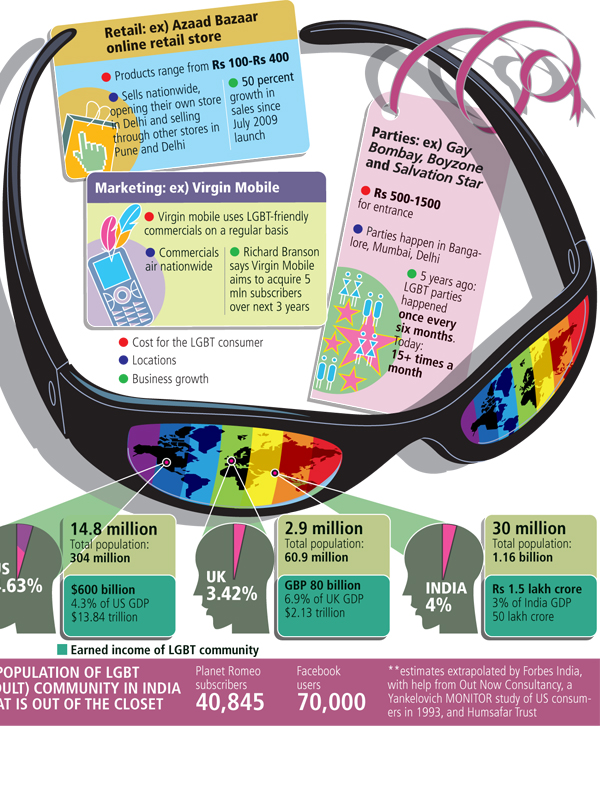 If the Supreme Court upholds the High court ruling, the scope for financial services will also be huge. For example, many gay couples will want joint home loans and health insurance.
Some LGBT business models have not yet been proven, such as gay tourism, like Indjapink in Delhi, gay accommodations, like Bangalore Rooms in Karnataka, and film festivals targeting the LGBT community. Gay activists attribute this to the fact that people are still coming to terms with the decriminalisation of homosexuality.
And many states will continue to put LGBT consumers in the back seat. In tourism, and other industries, the LGBT market is certainly a fledgling one. But it’s clear the pink rupee shouldn’t be overlooked.