McKinsey Struggles after Involvement in the Galleon Scam

Will McKinsey follow its own rules to regain its corporate reputation?

As governments respond to the financial crisis and its reverberations… a company’s reputation has begun to matter more now than it has in decades. Companies and industries with reputation problems are more likely to incur the wrath of legislators, regulators, and the public. — From an article titled “Rebuilding corporate reputations” that appeared in the June 2009 issue of the McKinsey Quarterly.

McKinsey’s critics often cherry pick those few instances when the consultancy firm gets its predictions wrong. But in this case, the firm was acutely prescient. 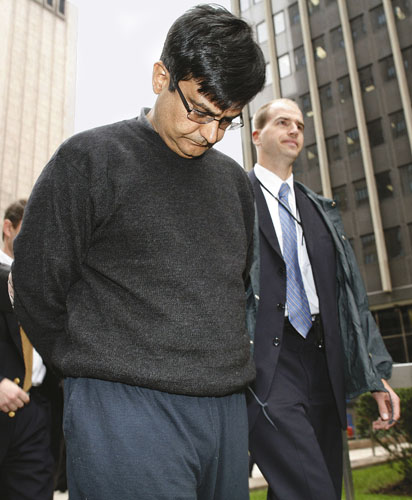 Image: Brendan McDermid/Reuters
TIED DOWN: McKinsey's Anil Kumar was arrested in October for securities fraud
It was prescient because on October 16, 2009, US federal authorities arrested one of McKinsey’s senior most employees, Anil Kumar, and charged him with securities fraud and conspiracy. Kumar was accused of passing on secret information about the reorganisation plans at one of his clients, computer-chip maker AMD, to Raj Rajaratnam, a billionaire and founder of hedge fund Galleon Group.
Though as stock tips go, it wasn’t much of one. For the tip turned out to be worth $30 million to Rajaratnam, in losses, after global financial markets tanked in September 2008 as soon as the hapless billionaire had bought into AMD. Ironically even Kumar might have lost money on his own tip, as he was said to be an investor in some of Rajaratnam’s hedge funds. But quantifying what the tip cost McKinsey might not be so cut and dry. That’s because the charges against Kumar struck at the corner stone of McKinsey’s reputation — confidentiality.
Founded in 1926, McKinsey & Co. is arguably the most well known management consulting firm today. Close to 9,000 of its consultants advise businesses, governments and non-profit organisations on how best to run their operations. Because the firm works with clients on a non-exclusive basis, meaning it could, for instance, be advising both Airtel and Reliance Communications on how best to make more money from India’s telecom market, it needs to do a very good job of maintaining client confidentiality.
Because the firm understands the importance of confidentiality, it has over decades conditioned its employees to live and breathe secrecy. Its consultants rarely ever speak to the media, the firm’s Web site does not mention clients, and employees refer to clients even among themselves in code. Employees are also explicitly forbidden from buying or selling stock in companies they work for.
But the allegations against Kumar, if true, could severely compromise decades of diligent trust building among wary clients. It’s not hard to visualise a senior AMD executive wondering if his firm’s secrets had been compromised, to not just hedge funds, but competitors like Intel too. Though McKinsey has had its share of controversies over time, like its close involvement with Enron; and its relationship with the now defunct Satyam for close to a decade, the Anil Kumar case could be its most critical yet. That’s because the fallout of the 2008 financial crisis has ensured public confidence in big business globally is at a record low. A March 2009 report by McKinsey Quarterly revealed 85 percent senior executives felt public trust in business had deteriorated. Another survey by global public relations firm Edelman, 2009 Edelman Trust Barometer, found 62 percent people trusted corporations lesser over the year before.
If there’s one thing McKinsey’s slick, jet-setting consultants represent to many, it is big business. “It is important for companies to realise that there is a general cloud of distrust around business driven by instances of malfeasance like Enron, Satyam, and the milk scandal in China. And because of that, governments are becoming more regulatory minded,” says Alan Vandermolen, Edelman’s president for Asia Pacific. So, how should McKinsey go about protecting its carefully built reputation from being damaged by this crisis?
Many of the answers lie, ironically once again, in the McKinsey Quarterly article referenced earlier. In it the authors recommend three priorities — assemble enough facts about its stakeholders and the likely impact of the crisis on them; focus on actions that matter to stakeholders, often through aggressive transparency; and influence stakeholders through two-way dialogues that go beyond traditional PR.
“The rule of thumb is maximum disclosure, minimum delay. The last thing you want to do is go quiet,” says Vandermolen. He also says because McKinsey has such a tremendous bank of goodwill with its stakeholders, that job should be relatively easier.
But doesn’t that risk adding further publicity and noise around what is already an embarrassing incident for the company? “That would be in the old days. In today’s world, there are dialogues relevant to the long term success of any business taking place on mobiles, Web sites and blogs. You can either opt in, or opt out, but you can’t control the message any longer,” says Vandermolen.
Given that McKinsey seems to know how its clients ought to rebuild their corporate reputations, does it believe in eating its own dog food? 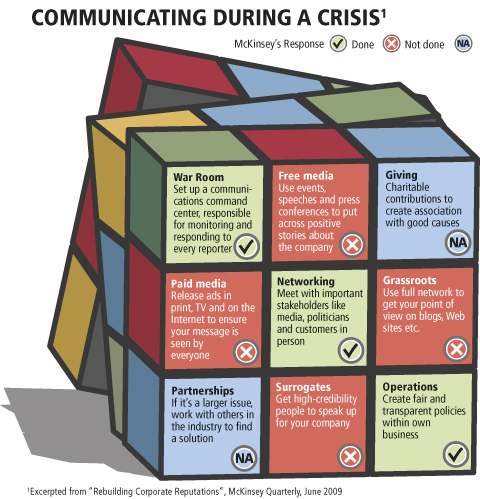 The company responded to Forbes India’s specific questions around its communications approach with a simple statement. “We were very surprised and remained concerned by the allegations against Anil Kumar. We are taking this matter very seriously and are co-operating fully in the federal investigation of the matter. Mr. Kumar has been placed on an indefinite leave of absence from McKinsey, while we conduct our own internal investigation and we wait for the unfolding of the legal process.”
McKinsey added that this was the first time in its 83-year history that an employee has been charged with “securities law violations”. But in 2007 two of its employees in China were charged with accepting bribes from Chinese computer manufacturers in return for purchase orders.
Though McKinsey refused to provide specifics of what it was doing to contain the crisis, conversations with a few employees reveal that the firm has been communicating with key stakeholders. The firm’s managing director is learnt to have sent a global email to all its employees even before news about Kumar’s arrest broke out. In it, he said McKinsey was looking into the matter, and that employees were not to speak to the media or outsiders around the same time.
Transparency, according to the McKinsey Quarterly article we began with, especially around critical business issues, is crucial. Sometimes it highlights a mismatch between consumer expectations and a company’s performance and therefore calls for action, it says.
“Even though McKinsey is privately held, they could come under increased scrutiny from governments simply because they deal with so much financial information. They will have to open up the firm a bit more. No institution is a sacred cow today,” says Ashwani Singla, India CEO of PR firm Burson-Marsteller