India's oldest wine company Indage has seen its overseas play backfire. Now it's MD Ranjit Chougule is digging it out of the hole

Indage Vintners’ red wine is a decent offering; a pity one can’t say the same about the red on its balance sheet. Indage, India’s largest publicly listed wine company, hasn’t released its balance sheet for the year ending March 31, 2009, but media reports in September noted that Indage was collapsing under Rs. 450 crore of debt, due immediately. (A former employee who did not wish to be named estimates the debt at Rs. 500 crore.)

Ranjit Chougule, managing director and company promoter, did not answer several emails asking to confirm the amount and several efforts to contact him proved to be futile. 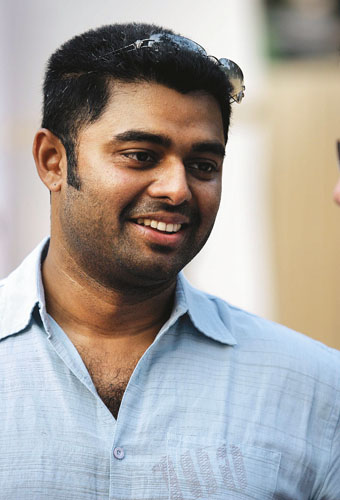 Image: Kedar Nene/Fotocorp
HIGH AND MIGHTY: Indage Vintners, promoted by Ranjit Chougule, has over 40 brands
In June, Chougule admitted that sales volumes had fallen 60 percent since September 2008. Its stock price has crashed from Rs. 853 in November 2007 to Rs. 55 now. The company has stopped supplying to hotels. Salaries at the company have been delayed and on September 1 this year, 250 of the company’s 450 employees resigned en masse, underlining their disgust for a company that had not paid them since November 2008.
How did Indage Vintners, India’s first wine-making company in 1982, with more than 40 brands across the market’s price spectrum, get to this stage? The short answer: Badly timed global acquisitions.
It’s been a free fall for a company that in November 2006 was labelled an ‘overperformer’ with ‘exciting growth prospects’ by stock analysts. They quoted Indage’s market share as 70 percent. By 2008, Indage was exporting to 69 countries and had 56,000 acres of vineyards under cultivation, receiving 28 awards for its wines in that year alone. The company’s turnover was Rs. 100 crore ($25 million).
In 2007, the burgeoning Indage gobbled up UK wine agent, McKinley Vintners, and Australian alcohol company Tandou’s winemaking arm. The following year, it acquired the ill-fated Australian Loxton Winery in March in an all-cash transaction for 60 million Australian dollars (Rs. 225 crore), which it was unable to pay and had to settle a painful lawsuit. Indage followed Loxton up with the acquisition of UK’s Darlington Wines and the Australian winery Vinecrest in May, and made an offer for a Norfolk-based winery in November, the month it stopped paying employees salaries.
“They were issuing fresh shares and using them as the basis to buy properties and assets outside the country, and then leveraging with foreign currency loans. What were they doing?” asks Rajeev Samant, founder and CEO of Sula Wines, the company that now claims to be India’s biggest wine maker.
In 2007, Indage announced plans for 1,000 wine bars across the country, and then opened a wine resort and spa in Nashik, Maharashtra. Distributors say it flooded the market with buy-one get-one free deals. In Uttar Pradesh, Samant says, it shipped 20,000 cases when just 2,000 cases of wine are purchased in the state per year. Forbes India was unable to verify this figure.
The result: Unsold inventory in nearly every state in India, disputes with distributors and a great deal of wine left in poor storage turning to vinegar.
Indage relied heavily on foreign currency loans for foreign acquisitions. A former employee in senior management at Indage said that 40 percent of its current debt is in foreign currency. Indage’s public relations representative could not confirm the number, as she quit the organisation in late October. Chougule’s brother, Vikrant, who is CEO of hotels for Indage Group, said “We run separate businesses, so I cannot answer your questions.”
Seth Freeman, CEO, EM Capital Management, invested in Indage over the last year and a half. He says its stock price remained high because successful investors like Rakesh Jhunjhunwala believed in the company and had invested in it. Jhunjhunwala held 5 lakh shares, but has since sold them.
Freeman has not received the company’s most current financial report for 2009, nor is it available with the Bombay Stock Exchange. When Freeman asked for it, the company did not respond. “The fact that the company didn’t respond to my request as a shareholder is not a positive sign,” says Freeman.
Can Indage come back? The Chougule family recently pledged almost 98 percent of its 25.42 percent stake in the firm, proving it doesn’t think the show is over. On June 10, Indage announced its board had approved a plan to raise Rs. 2 billion ($42 million) via a rights issue. However, there has been no progress on that. A week later, it announced that four investors will own a 40.28 percent stake for Rs. 90.6 crore in the company if they decide to convert their 10.3 million preferential warrants into equity shares.
Venki Venkatraman, Indage importer in the US, says after a seven month dry spell, Indage is slowly starting to send him wine once again. The company signed a big deal to bottle Foster’s beer in January, which is bearing fruit now. Indage’s share price is also holding constant. 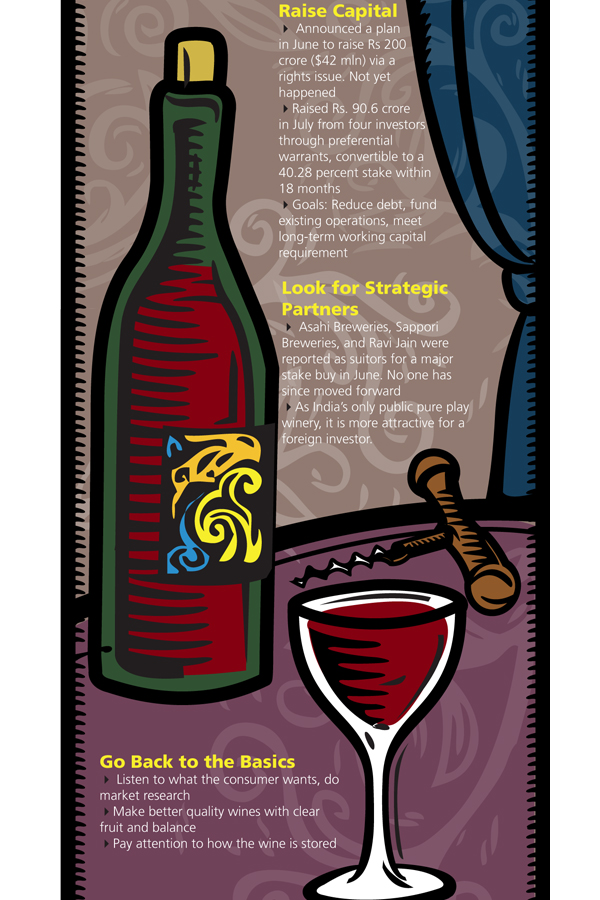 Perhaps most encouraging is the interest shown by Japanese giants Asahi Breweries, Sappori Breweries, and former marketer of beer brands like Sandpiper and Zingaro, Ravi Jain, who were reported as suitors for a major stake in the company in June.
However, no one has since moved forward. “Indage is the only public pure play winery, and the wine market should see 25 percent growth going forward. So they are quite attractive for a foreign investor,” says Freeman.
Steven Spurrier, wine appreciation expert, says what Indage needs to do is go back to the basics. This, incidently, is something that the company has never done before. “That is, listen to the consumer, do market research and make wines that have clear fruit and balance. Also, pay vast attention to how the wines are stored.”
Indage has tremendous brand equity. Every Indian wine-drinker knows how it tastes. Indage will hope they remember it when the company returns to form