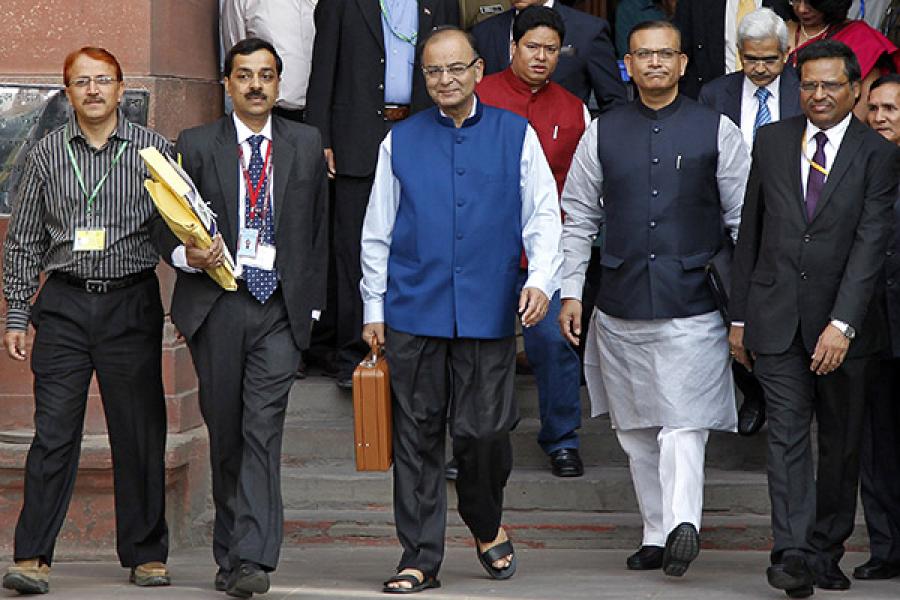 It would seem Finance Minister Arun Jaitley was well aware of the huge burden of expectations he was carrying on his shoulders this time, when he rose to present the Budget for 2015-16.  Taking off from the view that the world now thinks it is “India’s chance to fly”, Jaitley put together a Budget which, if one joins the dots, sets the stage for a new economic order in India. Alongside, acutely aware of the need to push growth despite the new GDP calculations, the finance minister has taken the route of pushing public investment for the purpose while veering slightly away from the fiscal consolidation path for the moment.

In many ways, Jaitley has presented a Budget which does not disappoint those who had placed their faith in this being a much more substantive vision statement than the one he presented just after the Narendra Modi government took charge in 2014. Budget 2015 operates on some clear themes, and Jaitley has taken pains to explain not just the challenges he faces but also the key ideas he is banking on. Declining agricultural income, the need for increasing investment in infrastructure, the need to remain on the fiscal consolidation path, a perceptible decline in manufacturing and the impact of the greater devolution of taxes to states have been highlighted in his Budget speech as his major challenges.

The Balancing Act
In that context, Budget 2015 is nothing short of an efficient balancing of imperatives and a road map for reform despite pressures. As expected by some quarters, he has eased the fiscal consolidation target a bit announcing that the three percent fiscal deficit target will now be met in three years, rather than two. The FY16 target is now at 3.9 percent, rather than the earlier 3.6 percent, though he has managed to stick to the 4.1 percent target for FY15, even as he reiterated the government’s resolve of not wavering from the fiscal consolidation path. Alongside, infrastructure spends have been hiked by way of higher outlays for roads and railways and an increase in the capex spends of state-owned enterprises. The Rs 20,000 crore corpus National Investment and Infrastructure Fund (NIIF), the proposal to have tax-free bonds for roads, rail and irrigation sectors and the accent on public-private partnerships for boosting infrastructure are steps aimed at making sure that the relaxation in the fiscal deficit target is targeted towards investment in infrastructure. The disinvestment target for FY16 has been pegged at Rs 69,500 crore, which will be crucial for public spending.

Reformist Thrust
Jaitley has not disappointed on the reforms front. A number of the broad proposals–be it on creating a job-creating economy rather than a job-seeking one or in making the capital markets more efficient or even on the banking front–would rank as important steps in creating a new economic framework. Sample some of the steps. The Forward Markets Commission has been merged with Sebi, a Public Debt Management Agency will be set up to bring external and domestic borrowings under one roof and section 6 of FEMA will be amended. There are several steps to ensure better monetisation of gold and foreign investments in alternative investment funds have been allowed.

A number of initiatives have been announced on the ease of doing business and the skilling side too, an aspect which has been at the centre of pre-Budget debate in connection with the government’s Make in India programme. The setting up of the MUDRA Bank to refinance the microfinance institutions and the entire initiative of ‘funding the unfunded’ also aims at addressing a major gap which existed for micro and small enterprises which struggle to access funds.

Perhaps one of the most important elements of the Budget is the move to rein in the parallel economy. Through a series of steps, Jaitley has aimed at addressing the black economy which includes the creation of a new law on black money and tough measures to bring offenders to book.

There are some other big moves as well. The General Anti Avoidance Rules (GAAR) a bugbear for quite some time, has been deferred by two years, the Goods and Services Tax timetable is now clear, the accent has moved from reducing subsidies to plugging subsidy leakages through what the Budget calls the Jan Dhan, Aadhar and Mobile (JAM) trinity for direct benefits transfer and the tax structure is being sought to be simplified and made predictable. All these were key concerns expressed by India Inc and the markets ahead of the Budget.

For the corporate sector, the broad road map is to reduce corporate tax from 30 percent to 25 percent over the next four years beginning next year. And the Budget also has enough for the individual taxpayer as well. Predictably, despite the markets being choppy through the day owing to some concerns on aspects of the fine print, the overall reaction from Corporate India has been one of cheer.

Says KPMG India CEO Richard Rekhy: “The finance minister has come out with a pragmatic Budget which is directionally focussed at achieving growth and keeping the fiscal prudence in mind. The focus is on ease of doing business in India and increased infrastructure spend. Measures like New Bankruptcy Legislation, startup entrepreneur’s funds, GST rollout by FY 2016, deferral of GAAR will definitely support the cause of ease of doing business in India.”

Adds Rajiv Lall, executive chairman, IDFC: “It’s a development-oriented budget and not a populist budget. A welcome shift in direction.”

However, BMR Advisors chairman Mukesh Butani expresses mixed reactions. “From a policy standpoint, the FM has engineered the Budget around the prime minister’s initiatives such as ‘Make in India’, ‘Swachh Bharat’, and ‘Skill in India’.  The focus on black money and curing the economy of this menace seems to have taken centrestage. The impetus to infrastructure, agriculture and education sectors is laudable though the much-expected big bang reforms are yet in the waiting.”

Impact Under Watch
With the overall macro situation now benign and inflation coming under control, Jaitley realises this was his best chance to lay the broad reform framework in place, and execute the various elements over time. However, what will be keenly watched is how the Budget initiatives play out in the days and months ahead and whether Jaitley’s gamble on growth actually pays off.

As BMR’s Rajiv Dimri points out: “Much of the reforms process outlined in the Budget proposals need to be realised through tangible steps over the year. It remains to be seen how reforms unfold and take shape in terms of GST implementation and TARC recommendations. Impact on prices would be interesting to watch with Budget proposals withdrawing service tax exemptions on construction of airports and ports, government services, increase in service tax rates and higher additional duties on petrol and diesel.”

While the ultimate test for Jaitley will be in how the various Budget proposals are implemented, the finance minister does deserve full marks this time round for putting forward a Budget which aims to address multiple challenges. As a statement of intent, it gets full marks. And that is a pretty good beginning.