The government has so far missed its Rs 65,000 crore divestment target for FY23 by a significant margin despite the LIC IPO. Economists believe it's an uphill task ahead and the number for FY24 may be scaled down in the upcoming budget 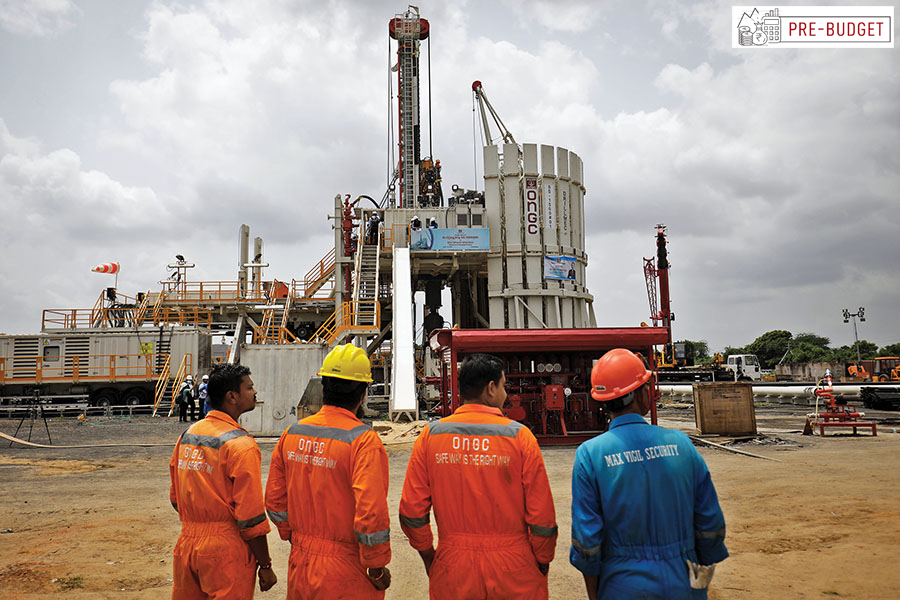 With less than a quarter left for FY23 to end, the government is likely to fall short of its divestment target of ₹65,000 crore by a significant margin. As a result, it is expected to set a more realistic target for FY24 during Budget 2024. Economists also believe that, with an eye on the general elections next year, privatisation of government’s existing assets may not be on the agenda.

Madan Sabnavis, chief economist, Bank of Baroda, expects the government to scale down the disinvestment target to around ₹40,000 crore for FY24. There are two reasons for this. One is that most of the low-hanging fruits have been plucked and hence, it would, progressively, be more challenging to divest its stake in PSUs (public sector undertakings). Second, with the global situation still uncertain—which has a bearing on oil prices—the government will tread carefully on getting one of the OMCs (oil marketing companies) for sale, as planned earlier. The last PSU sale in 2022 did not meet market expectations and, therefore, the target will be more pragmatic, Sabnavis says.

“The divestment target for FY24 will be lower for sure. However, with other income streams like corporate and Goods & Services Tax (GST) being buoyant, there would be no undue pressure on fiscal balances. The more important thing is to get the number right for 2023-24 because the same buoyancy in taxes may not be available,” Sabnavis tells Forbes India.

In FY23, the government has divested ₹31,106.4 crore, according to Department of Investment and Public Asset Management (Dipam) data. Of this, ₹20,516.12 crore was raised by selling its stake in Life Insurance Corporation of India (LIC) via an initial public offering (IPO). The government offloaded 3.5 percent stake in LIC.

The government in FY23, as of January 4, has raised ₹3,058.78 crore through offer-for-sale in ONGC and ₹3,839 crore by sale of shares in Axis Bank held by SUUTI (specified undertaking of the Unit Trust of India or UTI). SUUTI, which has minority stakes in several listed and unlisted companies, was created after UTI was bifurcated by the government in 2002. In addition to the stake sale, the government has received ₹36,637.78 crore through dividends from PSUs, according to Dipam data on its website.

Suvodeep Rakshit, senior economist, Kotak Institutional Equities, expects the FY24 divestment target to be modest. “There are holdings across sectors and SUUTI holdings which the government would aim to divest out of… assuming the markets are supportive,” he says.

According to Garima Kapoor, economist-institutional equities, Elara Capital, the government is likely to project a more realistic target of ₹40,000-45,000 crore for disinvestments in FY24. She says the lacklustre progress in disinvestment this fiscal suggests the need to be pragmatic with targets. “Due to market conditions, the proposed sale of Bharat Petroleum Corporation (BPCL) couldn’t go through, but realisation from the LIC divestment was lower than expected and proceeds of the IDBI Bank sale are unlikely to materialise in FY23,” she adds.

Aditi Nayar, chief economist, ICRA, estimates that the FY24 divestment target could be pegged at ₹60,000 crore to ₹1 lakh crore in the Budget as a pipeline of disinvestment would add credibility to the government’s fiscal deficit targets. 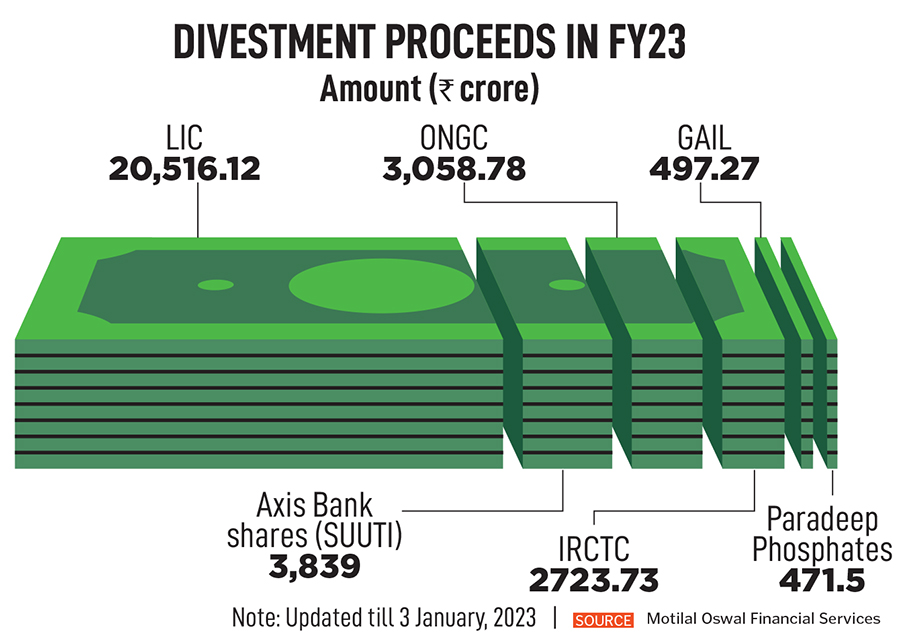 The ambitious LIC IPO sailed through, but meeting the ₹65,000 crore divestment target appears to be an uphill task. Historically, the government has been missing divestment targets for the full year. It had made a drastic cut in the target for FY22 to ₹78,000 crore from ₹1.75 lakh crore. “Improvement in the pace of economic recovery would provide new avenues for enhancing disinvestment receipts in the financial year,” the government had said in Budget documents in February 2022.

“There have been gains in direct taxes and GST which will more than cover up for any shortfall in divestments in FY23. The expenditure side has also expanded on certain items, but with some expenditure savings and a higher-than-budgeted nominal GDP growth, the government will be able to stick to its gross fiscal deficit/GDP target of 6.4 percent.”

With a collection of ₹1.5 lakh crore in December (for sale in November), GST collections have now exceeded the ₹1.4 lakh crore-mark for 10 months in a row. The GST collections for December were up by 15.2 percent year-on-year, and 2.5 percent from November, reflecting the festive demand. A total of 7.9 crore e-way bills (electronic bills for movement of goods across the country) were generated in November, higher than 7.6 crore in October.

A slew of factors such as the Russia-Ukraine war as well as commodity prices delayed the government’s divestment plans in FY23. “It was mainly a combination of uncertain global environment and the whimsical nature of the markets that came in the way. Also, the performance of the big disinvestment of 2022-23 was less than market expectations which came in the way of accelerated disinvestment this year. The oil economics was also distorted with inflation causing the government to partly pass on the burden to the OMCs,” Sabnavis explains.

Additionally, the lack of due diligence and proper planning have also been partly responsible for slow divestments. “For instance, the Pawan Hans deal was put on hold after a report revealed that the consortium to which it was sold is led by a financial company based in tax haven Cayman Islands; the company had defaulted in payment in an acquisition case under the Insolvency and Bankruptcy Code,” says Kapoor.

Another reason for the delay in divestment in government-run listed companies is the weak performance of PSU shares on the stock markets. However, that is now improving. According to an analysis by Motilal Oswal Financial Services, during FY12-17, profitability and market cap performances were extremely tepid with overall PSU profits declining at 5 percent compound annual growth rate (CAGR) and BSE PSU index generating returns at 3.3 percent CAGR. Between FY17 and FY22, PSU profits expanded at 22 percent CAGR while BSE PSU index remained flat. Subsequently, PSU index rose by 17 percent post April 2022.

During FY17-22, the BSE PSU index (flat) underperformed the Nifty (13.7 percent growth). PSUs’ share in India’s market cap dropped to 10 percent in FY22 from 28 percent in FY12, but it is now recovering and currently stands at 13 percent. Over a similar period, India’s market cap multiplied to ₹265 lakh crore in FY22 from ₹58 lakh crore in FY12, and it currently stands at ₹289 lakh crore.

“Loss pools of PSUs have reduced consistently over the last five years. The contribution of loss-making companies has dwindled over the past few years, which is currently at 1 percent of the profit pool versus 47 percent in FY18. The share of PSUs in the profit pool expanded to 31.3 percent in FY22 after hovering in the range of 17 to 30 percent during the past few years,” says Gautam Duggad, head, research, Motilal Oswal Institutional Equities. 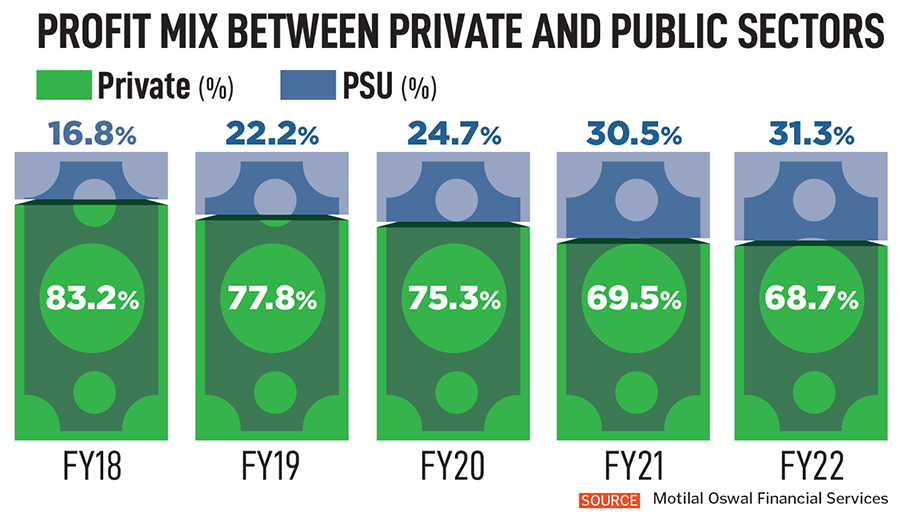 “Privatisation means selling fully to a third party while disinvestment would be selling part holding in any company. There is active talk on privatisation of a private bank held jointly by the government and LIC, which will show the way forward for such decisions. From a purely political point of view, disinvestment is always a safer option just before the elections. But we should remember that during the announcement of the Atmanirbhar schemes, the government was clear about privatisation of non-strategic companies and hence that could be considered as a medium-term goal,” says Sabnavis.

As privatisation of government-run companies typically take longer, it may not be a top priority after completion of the IDBI Bank sale in FY24, according to economists. “Privatisation is more challenging as it has a large employee base as well as inter-company synergies need to be taken into account. While privatisation will remain an active agenda, divestment will be an easier approach in the short term,” Rakshit explains.

After Air India’s sale, the government’s privatisation process has been slow. Other than IDBI Bank, it had proposed to take up the privatisation of two public sector banks and one general insurance company in 2021-22. The needle hasn’t moved much there.

Also read: Is 6% growth possible? Nirmala Sitharaman has her work cut out

“The government’s intent towards privatisation of companies under the non-strategic sector remains intact,” says Arora. She believes more than the elections, market conditions will determine the ability to successfully privatise. “We are likely to confront global recession even as global central banks, especially in advanced economies, are likely to continue the path of quantitative tightening,” she says.

On October 7, the government had invited expression-of-interest (EoI) offering to sell a total of 60.72 percent stake in IDBI Bank, which includes 30.48 percent held by the government directly and 30.24 percent by state-run LIC, along with the transfer of management control. Currently, the government and LIC hold 45.48 percent 49.24 percent respectively in IDBI Bank. The stake sale is not completed yet and the EoI deadline was extended from December 16 to January 7.  “On immediate basis, even if the government can deliver on the IDBI Bank’s sale, it would end up sending the right message with respect to reforms,” says Arora.