This probably indicates that the country's largest domestic institutional investor is taking a cautious stance on the markets, or simply profit booking as markets rose 10 percent during the quarter 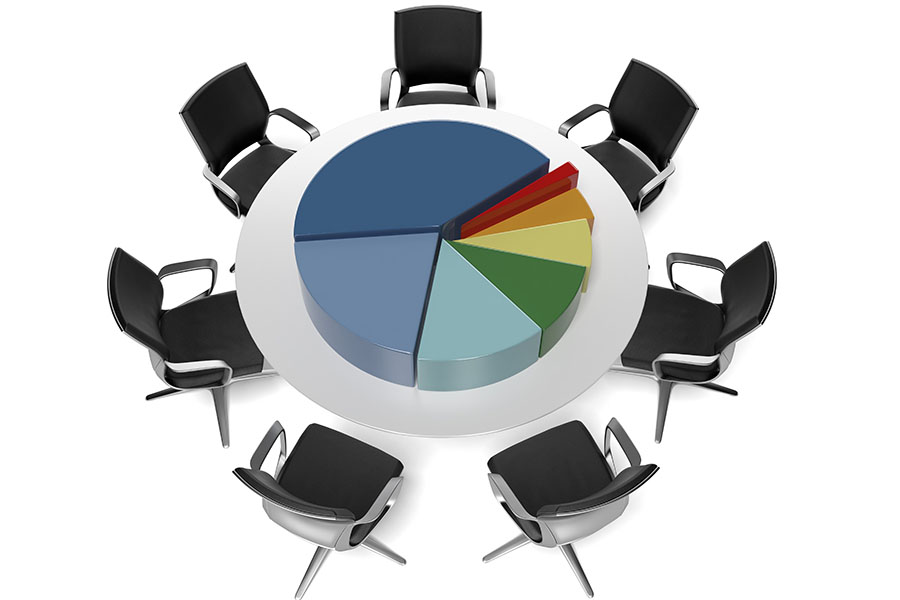 LIC, most likely, has taken a cautious stance of stock markets and reduced its stake in companies
Image: Shutterstock

Life Insurance Corporation of India (LIC) has reduced its stake in listed companies in July-September period, the first full quarter after its stock markets debut in May this year. The largest domestic institutional investor in Indian stock markets trimmed its stake in listed companies to 3.87 percent in the three months ending September, probably indicating LIC's cautious stance on the markets or simply profit booking as markets had surged during the period.

LIC’s holding in companies listed on the National Stock Exchange (NSE) were at 3.69 percent in year-ago period on an aggregate basis by value percentage, as per analysis based on Prime Infobase data. This compares to LIC’s exposure at 3.92 percent in June quarter of 2022.

However, in absolute value terms, its holding was at Rs10.27 trillion in September-end, showing an increase of 10.38 percent over the previous quarter. In terms of ownership by number of shares or share by volume, LIC’s share went down marginally to 0.76 percent by September from 0.79 percent one quarter back.

“LIC, most likely, has taken a cautious stance of stock markets and reduced its stake in companies,” said an analyst requesting anonymity.

According to Pranav Haldea, managing director, Prime Database Group, profit booking is the key reason for LIC’s cutting stakes in listed companies as markets had risen in the three months period. “Typically, LIC sells off stake in companies to book profit in periods when markers rise,” he says. 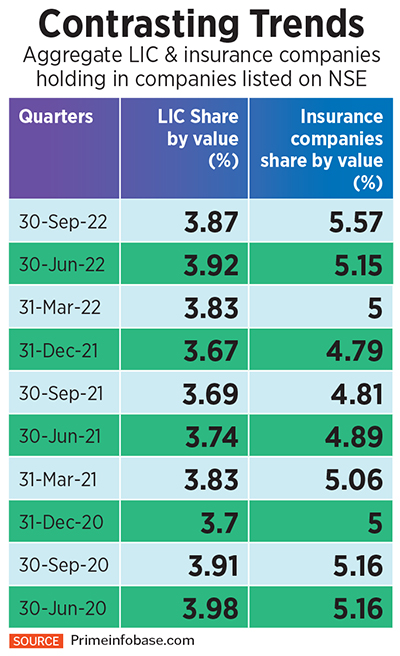 Indian markets had made high return in July-September period with both benchmark indices Sensex and the Nifty increasing 8.3 percent each, while BSE 500 was up nearly 11 percent.

As a whole, however, share of Insurance companies saw a massive increase to 5.57 percent in September-ended quarter, up from 5.15 percent in previous quarter. 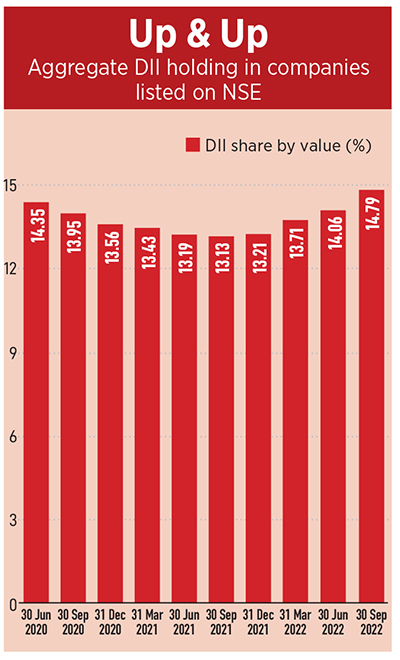 Domestic institutional investors (DIIs), which includes domestic mutual funds, insurance companies, banks, financial institutions, pension funds investors had a share of 24.03 percent in listed companies in September quarter, which is at an all-time high. This compares to DII’s share at 23.54 percent in the June quarter. In the same period, DIIs had pumped in Rs17,597 crore during the quarter. In value terms, DII holdings in these companies increased to Rs 39.26 trillion by end of September, a jump of 17.46 percent over the last quarter.

Meanwhile, despite net inflows from foreign portfolio investors (FPIs) of Rs 48,570 crore during the quarter, FPI’s share declined further to a 10-year low of 19.03 percent in September quarter, down by 17 basis points from 19.20 percent as on June.

To put this in perspective, as on March 31, 2015, FPI share was 23.30 percent while the combined share of DII, retail and HNI was just 18.47 percent. The gap between FPI and DII holding decreased to its lowest level in this quarter, DII holding now being just 22.30 percent lower than FPI holding.

The widest gap between FPI and DII holding was in quarter ending March 31, 2015, when DII holding was 55.45 percent lower than FPI holding. “The FPI to DII ownership ratio also declined to all time low of 1.29 as on September down from 1.37 as on June 30, 2022. Over a 13-year period (since June 2009), FPI share has increased from 16.02 percent to 19.03 per cent while DII share has increased from 11.38 percent to 14.79 percent. This further showcases the rise of domestic investors and the huge counter balancing role they have played to foreign investors,” Haldea adds. 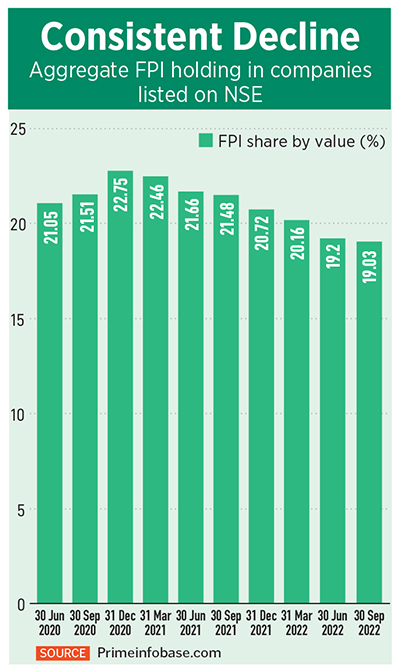 Data showed FPIs pulled out Rs 21,878 crore from sectors like information technology and oil, gas and consumable fuels during the quarter while investing Rs 22,689 crore in financial services and health care.

Share of retail investors in companies listed on NSE declined marginally to 7.33 percent in three months ending September from 7.40 percent in previous quarter. In value terms, retail holding increased to Rs19.47 trillion from Rs17.59 trillion in previous quarter, showing a jump of 10.64 percent. Retail investors are defined as individuals with up to Rs2 lakh shareholding in a company.  Considering only free float (non-promoter holding), retail share by value went down to 15.11 percent in the quarter ending September from 15.26 percent a quarter back.

Data also showed a significant presence of retail investors in mid and small cap companies, from which institutional investors typically stay away. The picture is very different if one looks only at Nifty-50 companies; the retail share in these companies was a meagre 7.08 percent (by number of shares or share by volume), declining marginally to 6.54 percent in case of top 100 companies listed on NSE.

Tweets by @forbesindia
Hong Kong plans to implement new ways to avoid a crisis like FTX
For the second time, Crypto.com 'accidentally' sends crypto to a wrong wallet address