From Dorm Captain to Corporate Pilot

My dad doesn’t believe when I say it but seriously, I always wanted to come back. Because I feel one can make the biggest impact here and also the need to make the impact is here. It wasn’t easy for my wife, a lawyer with a great job in the US, but she gave the nod and we moved in 2005 to head the GECAS [GE Commercial Aviation Services] India. I remember those were crazy days. Tremendous growth where everybody was poaching everybody, pricing was out of whack and credit growth was going crazy.

As the GE India head, I lead 14,500 people with close to 15 businesses. My top core team — GE India board — consists of around 20 people (15 business heads and five in my corporate office). While I interact with my five staff almost daily, with the other 15 heads I have monthly calls and we meet once a quarter at an offsite, discussing visions and targets. 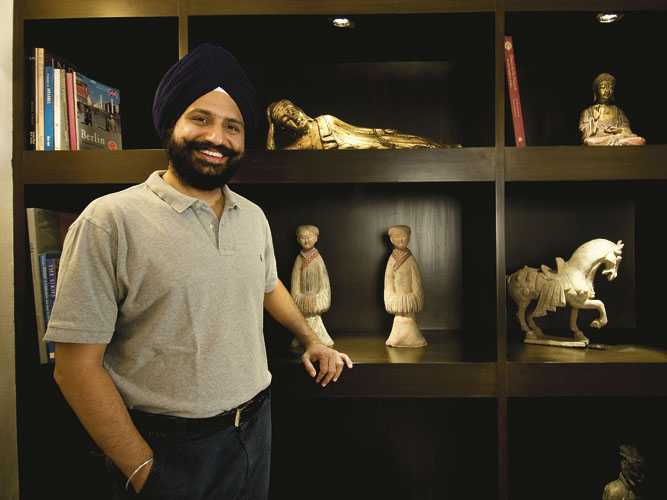 Image: Amit Verma
Tejpreet S. Chopra is President and CEO of GE India
What I have learnt is if you pick the right people and give them the freedom, you can virtually run the business on autopilot. Communicating and interacting with people is my top priority and I do it in many ways. Webcasts, employee calls, emails — but I like townhall meetings the most, which I try to do at least once a quarter. I travel around the country to our various locations to do it. It is a two-way street — you get feedback and also show your people the big picture and bring everybody on the same page. I use emails a lot, SMSes a bit and quick phone calls often. I try to respond to all my emails within 24 hours.
Economic slowdown has had its impact. The biggest change I feel is the uncertainty and volatility. It makes the CEO’s job lot difficult. More than ever before, you need to be very clear what your focus areas are. I find myself interacting with my counterparts in China and other countries far more today. Yes, at a time like this, being in India is great but there’s lot of attention and expectations from every one.
I grew up here in Chennai. I began swimming at a young age and would swim three-four hours every day in school, starting at 5 a.m. I have competed at a national level in swimming and perhaps that’s where I learnt to be competitive.
It was in grade 8 that my parents sent me to Sanawar, a boarding school [in Himachal Pradesh], to get some north Indian streak in me. When I look back, I think I picked up a lot of my leadership tips there.
Boarding life teaches you to be independent, think differently, deal with people, work in teams and be competitive. It’s a great way to hone leadership skills with no downsides. Being dorm captains or house captains may sound inane but can help enormously.
After Sanawar, I joined St Stephens college [Delhi]. I am glad I did it in India. It gave me incredible network of friends.
After graduation, I wanted to see the world and took up a really grunt job working in a vegetable market outside London literally lifting stuff and I saved enough to travel around Europe. That stint helped me value money early in life. From Sanawar to Stephens to Cornell to GE — I think one thing each of those transitions did for me is to constantly raise the bar and push me to compete with the best in the world.
I joined GE in the US right after my MBA at Cornell in 1996 and stayed. I have done stints in Europe, Asia and the US. When I joined I would travel four-six months in a year as part of the GECAS — that gave me good exposure. It was here I saw our business unit scale up from $8 billion to $45 billion in a short span and got my first lessons in speed, scale, and thinking big.
In 1998, when the South East Asian crisis hit, I was in Hong Kong and got a first hand feel. 9/11 was even worse.
These experiences have tau­ght me valuable lessons in surviving downturns. My tips to deal with it? It’s a four step process:
1. Figure out what’s core, focus on it and protect it.
2. Quickly take all the difficult decisions like layoffs.
3. Scrutinise operating details to cut costs and align to the market needs.
4. And finally, plan for the future. Downturns provide great opportunities for companies to differentiate and build for future.
Having mentors aro­und help tremendously. I have been lucky. Henry Hubschman, my ex-boss is one of them. At times he would ask people to put me on a new project and throw me straight into the deep water and learn to swim. It challenged me but also honed me for bigger roles. I often reach out to my senior colleagues to bounce off new ideas and figure out solutions. I often use my dad as a sounding board.
Personally, I aspire to provide thought leadership. Being able to groom many leaders who can take my job would be great.
All this leaves little time for my passions. When I was growing up, I had too many — I used to swim, play sarod and gave concerts in my school. I tried my hands at tabla too. But no longer! Gruelling schedule between Monday and Saturday doesn’t leave much time. I manage to listen to some Indian classical. Even the passion for sports survives in a different form. I am a Formula 1 lover and I travel to see the Grand Prix. I went to watch Beijing Olympics as well. I like the competitive spirit there.
(As told to Malini Goyal)