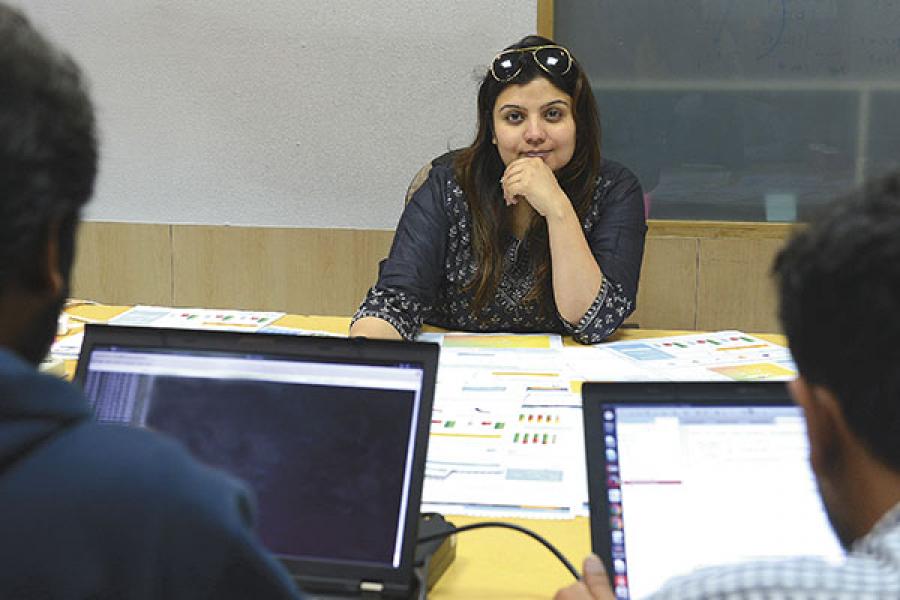 An average iit aspirant spends about Rs 75,000 preparing for the Joint Entrance Examination (JEE), yet it’s nearly impossible to assess his or her progress during coaching. Also, due to the poor quality of teaching at many centres, students are made to learn by rote. That’s why a trick question can easily throw them off guard and mock tests don’t necessarily indicate a student’s final performance. In contrast, students taking a GRE or GMAT practice test are reasonably certain about their final score.

Aditi Avasthi, a former TCS employee, set out to change that when she founded Embibe, an online service to prepare students for competitive exams.

Avasthi, 33, knew that breaking into the entrance coaching market would be tough. Instead, she asked herself: ‘How can you improve the performance of every student?’ Her eureka moment came in 2012, when she realised that sophisticated analytics had the potential to provide personalised feedback.

Embibe started in June 2012 with $700,000 in seed funding raised mostly from Avasthi’s family and friends. The first year was spent in drafting preparatory tests for the JEE and medical entrance examinations. In December 2013, Kalaari Capital and Lightbox Ventures invested around Rs 24 crore.

“We invested in Embibe as it looked at education from a very different lens. It wanted to focus on making students smarter in taking exams,” says Prashant Mehta, partner at Lightbox.

Currently, Embibe has 2,20,000 students taking its tests. Once a test is complete, the company’s analytics engine provides feedback on a host of factors—the average time a student spent on a question, what concepts were consistently answered wrong, etc.

Over ten tests, Embibe says they have seen a noticeable improvement in scores. “We have been able to predict a candidate’s final score at the JEE with 92 percent accuracy,” says Avasthi.

Given its asset-light model, Embibe does not have to fear burning cash. It has not set up any classrooms and has a small 50-member team working on tests and analytics.

However, the key challenge will be to scale up rapidly. This is where Embibe may well have an ace up its sleeve. Like LinkedIn, it plans to make its tests free for users and charge them only for the analytics. If the user sees value, she will pay. Next on the agenda is to create a test series for students in classes VIII, IX and X and also enter the bank recruitment examination space.

Tweets by @forbesindia
Ola: Taking India on a ride
India Inc's finest leaders to be felicitated at FILA 2015 today