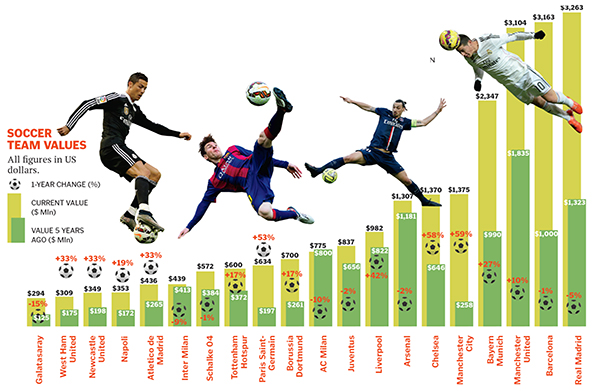 The 20 richest soccer teams in the world are worth an average of  $1.16 billion, 11 percent more than last year and up 84 percent since 2010. Spain’s Real Madrid tops the list thanks to $746 million in revenue, the most for any sports franchise on earth. Eight of the top 20 are English teams, England’s Premier League recently scored a new UK television deal that will pay an annual average of $2.6 billion for three years beginning with the 2016-17 season—more than any other soccer league and a 70 percent leap from the current agreement.

When the Premier League’s overseas agreements are finalised by the end of this year, total media rights are expected to surpass $4 billion a year, which is second only to the NFL’s $6.7 billion.

Tweets by @forbesindia
Society's lottery winners are worthy of respect, too: Rich Karlgaard
UrbanClap raises $10 million in Series A funding