Given India's sagging exports and low private investments, can domestic consumption alone propel GDP growth towards the government's target of 8 percent this fiscal? 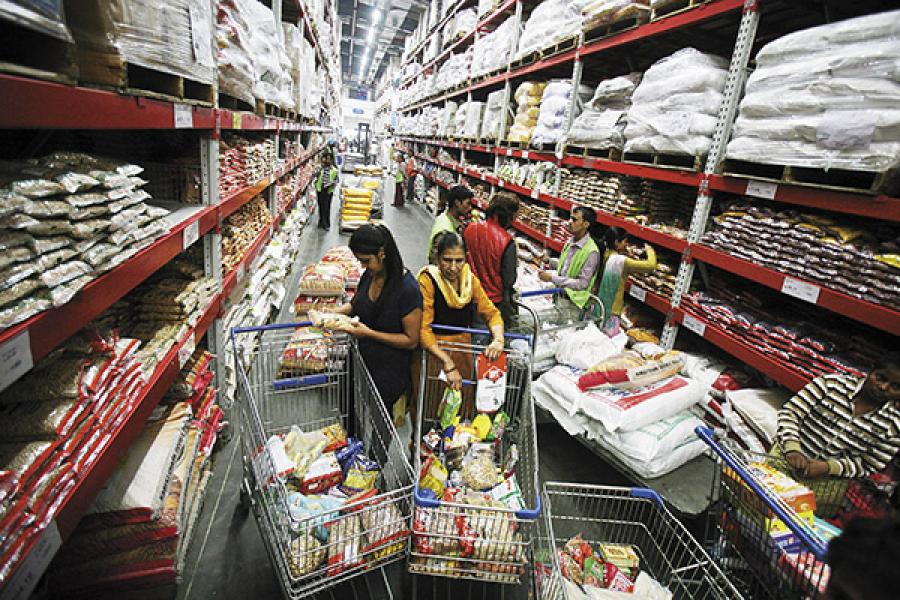 When economic growth data for the first three months of the current fiscal was released in August-end, it raised a few eyebrows. Growth in gross domestic product (GDP), at 7.1 percent for the first quarter of FY17, was the slowest in six quarters. In the preceding quarter, the economy had grown at 7.9 percent, while growth was 7.5 percent in the corresponding period a year ago (see chart).

But the surprise did not turn into shock and the stock markets did not go into a tailspin either. A good monsoon and the anticipated consumption boost that the 7th Pay Commission payout is expected to generate eased concerns somewhat and prevented the panic button from being hit. But can the Indian economy achieve the government’s 8 percent GDP growth target for FY17?

“India will cross 8 percent economic growth in the current fiscal. A good monsoon will push farm sector growth to 4-5 percent this year,” said Arvind Panagariya, vice chairman, Niti Aayog, during a recent media interaction. While everyone agrees that a good monsoon will boost agricultural growth, not many are sure if it will propel GDP growth to 8 percent. 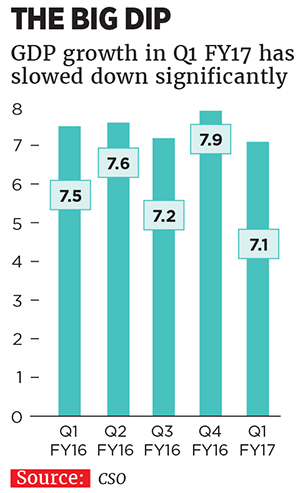 This is because two of the four engines of growth are not firing. Exports continue to decline (merchandise exports fell by 7 percent year-on-year in July) and growth in private sector investment has been negative for two straight quarters (it fell by 3.1 percent in the first quarter of FY17 and 1.9 percent in the fourth quarter of FY16 from the respective year-ago periods). Public investment, the third engine, continues to be a focus area for the government but it is unlikely to offer the same thrust as it did in FY16. That leaves the economy with only one lever of growth—domestic consumption.

The Reserve Bank of India, in its latest annual report, emphasised this when it said “while a durable pick-up in investment activity remains elusive, consumption will continue to provide the main support to aggregate demand and may receive a boost from the revival of rural demand in response to the above-normal southwest monsoon as well as the 7th Pay Commission award.” The central bank expects the consumption boost to raise the gross value added growth (which, like GDP, is another way of measuring economic activity) to 7.6 percent in FY17, compared with 7.2 percent in FY16.

Citi Research is projecting a GDP growth of 7.7 percent in FY17. “Revival in private sector investment is going to be a long haul. It will depend on: A strong revival in demand that would trigger need for more capacity, ability of banks to lend and the ability of the companies to borrow. There are no quick fixes,” says Samiran Chakraborty, chief economist for India at Citigroup. “An 8 percent GDP growth target for FY17 appears to be difficult. To achieve this, the economy has to grow at 7.9 percent in the remaining three quarters.”

The government, for its part, continues to be confident. Its argument is that if the economy grew at 7.6 percent last fiscal despite two consecutive years of monsoon failure, good rainfall coupled with the consumption boost should ensure that growth crosses the 8 percent mark this financial year.

(This story appears in the 30 September, 2016 issue of Forbes India. To visit our Archives, click here.)

Tweets by @forbesindia
How to holiday like Robert de Niro and Kate Winslet
India is a place for low cost and high brains: Jack Welch