You climbed all the organizational rungs and then hit the 'Now what?' question. Staying motivated is hard and here's what can you do about the situation 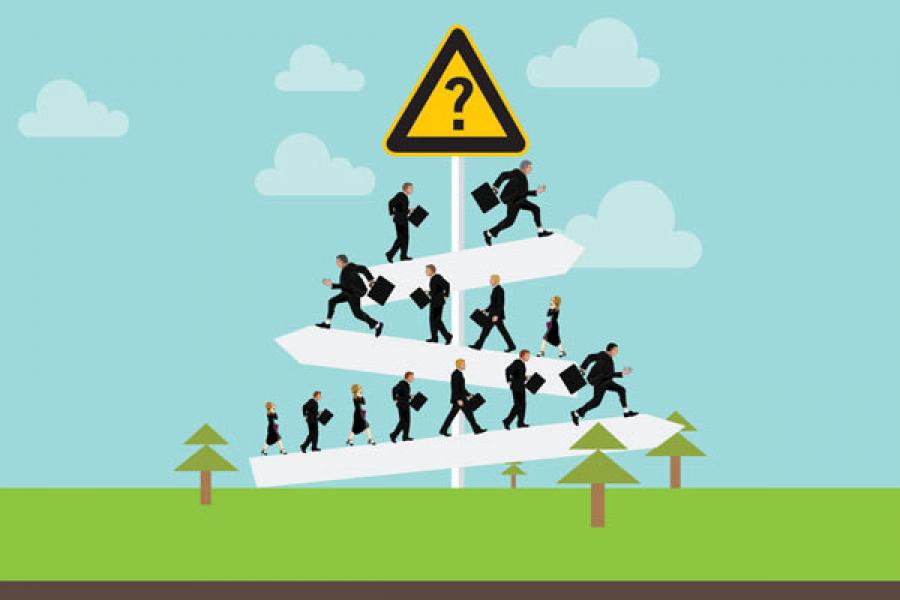 As the writer Vladimir Nabokov once noted, the future is fiction. Yet for hard-charging executives, that imaginary tomorrow is a deeply familiar destination. What happens when, after 20 or 30 years of plotting and planning, you run out of rungs to climb?

They say it’s lonely at the top, but in a world that worships youth and extraordinary accomplishment, being a senior executive in the middle of the pyramid is not easy either. With human resource initiatives focused mostly on grooming a small group of successors or nurturing a large pool of youthful talent, the problems of older executives tend to get short shrift.

Managing this last stage of a career is not easy. But management experts and executive coaches say that there are a variety of things senior executives can do to stay engaged and in a role they find fulfilling.

Stuck and Senior
Often, older executives don’t perceive that their company has lost confidence in them. “It’s not something that happens overnight; it creeps up on them without their realizing it,” says executive coach Carol Kivler. “….It takes a little while to say, I’ve been passed by three times here, what does that mean?”

Usually, the answer is, bad news. At the worst, the indifference could be the prelude to a layoff in favor of a younger, cheaper employee. Age discrimination may be technically illegal in many places, but it’s still quite common: in a number of surveys in Europe and the US, for instance, about half the respondents say older workers are discriminated against.

If the executive is laid off, the result is often serious. A recent survey of the AARP found that although the unemployment rate for workers over 55 is lower than average for all workers—4.1% to 5.5% on average in the US—those who lose their jobs tend to stay unemployed longer than people 25-54 years old. Over 20% of the long-term unemployed aged 55-64 leave the labor force altogether after they’re laid off; those who do manage to get rehired must often take a lower salary than at their last job.

But even if they aren’t sent packing, older executives may still find themselves in a difficult situation. “I think the worst thing that happens to people that I see is they lose their mojo…. they don’t enjoy their job anymore,” Kivler says.

How did they get here? Sometimes, they look at themselves and decide that they’re the culprit, Kivler says. “When they get turned down for promotion after promotion, they start second guessing their skills, and they recognize that I am my worst enemy here. I’m the one that’s causing these issues because I’m not standing up, I’m not fighting for myself, or I’m not creating the image I want other people to see.”

More often, however, the problem is not really their own fault, but the result of circumstances, such as changes brought on by new leadership or in the aftermath of a merger. “Many times, it’s because the company they were hired to work for is no longer the company they work for today,” Kivler says.

The problem may be more than a feeling of estrangement from a new management team, however. The general trend toward flatter organizational hierarchies has had the unintended consequence of sending more power upward, according to recent research by Julie Wulf, a Harvard Business School management professor. While this trend was intended to make organizations more agile, Wulf found that it’s actually given many executives less autonomy in their work—and most organizational psychologists say that a feeling of autonomy is an important part of what makes work satisfying.

Stay or Go?
The first step for an executive who feels caught in this bind is to recognize it, Kivler says. Understand and accept where you are in the organization. Then, she says, decide what to do about it. “Don’t be a passenger in your own career,” she says. “Get in the driver’s seat.”

So which way should you turn?

One option is to find a different role at work. Saul Miller, a Vancouver-based sports psychologist, says that as their physical powers fade, the best professional athletes tend to find new ways to contribute to their teams. “The great players in business and the great players in any sport are team players,” he says.

In the end, Miller argues that the real limiting factor for an aging athlete is less physical than emotional. “They say in sports, when the passion starts to diminish, it’s time to hang it up. You have to keep the passion alive,” Miller says.

Kivler sees passion as equally crucial for older corporate executives. “It’s all about keeping your mojo,” she says.

Finding someone to mentor within the organization can be a good way to help take the focus off of your own problems. “You’ve reached your max, so now it’s time to leave a little bit of a legacy,” she says.

Outside interests can help too. “If your mojo is not coming from work, then you’ve got to find another way to keep yourself motivated,” Kivler says. “Many times it’s finding something outside of the job.”

If you Go…
Or you can leave.

Talk to a headhunter. Network. Update your resume. Join LinkedIn, Kivler says. “Let’s face it—70% of all jobs that are available are not posted… You should be constantly climbing that network, looking for your next best thing.”

Often, she finds that people who are being treated badly by their organization can leave for another, better job, and eventually find themselves welcomed back later by their first employer—with a better job!

Others want to try something completely different. After decades of navigating bureaucracies and wrangling, executives often dream of a change of pace—trying their hand at entrepreneurship, for instance, or teaching.

But look before you leap, advises Edward Hess, now a professor of business administration and Batten Executive-in-Residence at the University of Virginia’s Darden School of Business, who held a variety of roles at major corporations before he became an academic.

“Moving from corporate life to academia, a start-up or starting a business is a big change. Each of those environments is very different than corporate life. Too many people make those jumps without really doing their homework and understanding the differences,” says Hess.

“Too many people think that they can easily transfer their skills and corporate way of succeeding to those environments. That is not true in all cases. The pace, resources and decision-making processes all differ materially in each environment from the corporate world,” he says.

Talk to people in the new world you’re thinking about joining, Hess advises. “If it is academia you are interested in, start teaching part-time while you are in the corporate world. See if you like teaching and how academia works.”

“If it is a start-up you are interested in, take vacation time and go spend a week at the start-up and watch and listen. Figure out whether you are willing to work start-up hours doing whatever needs to be done,” he says. And if you are thinking about starting a business, he says, try to find a way to launch it while keeping the day job. “Remember, many start-ups fail,” Hess says.

The people you should listen to less, however, are the people at your company who keep implying you have nothing much to offer. In the current climate, Kivler insists, companies can’t get away with that sort of treatment anymore. “Guess what? There are opportunities out there,” she says. “You don’t want me? No problem.”