To be sure, EV action is in motion all over the country and has gripped conglomerates and startups alike 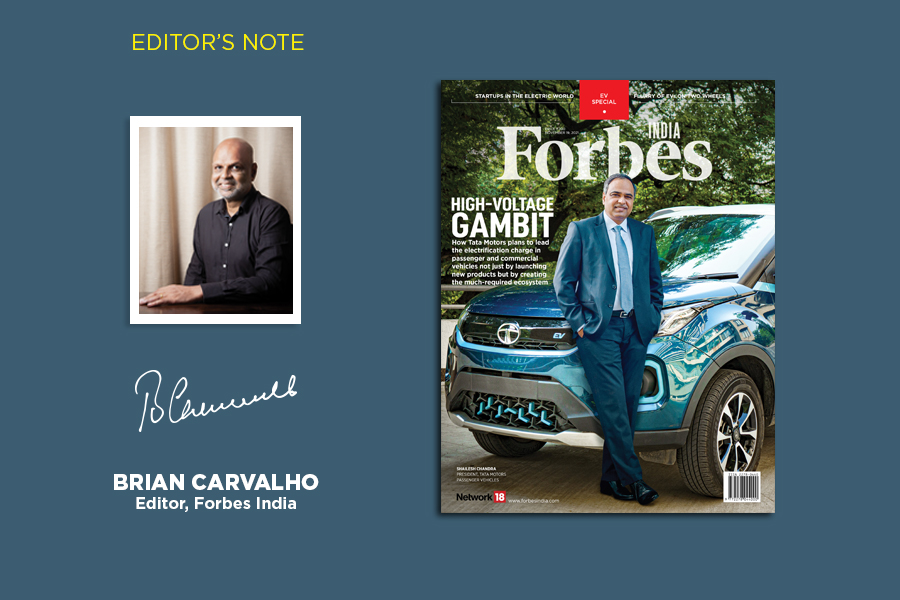 Tech trends are usually first noticed and picked up—besides, of course, being pioneered—by the geeks. And, if Bengaluru is indeed the Silicon Valley of India, you would be tempted to believe that many Indian tech and internet businesses would have attracted their early adopters from the Garden City—from ecommerce (Bangalore in 1999 was home to India’s first ecommerce startup, Fabmart) and ride-sharing to edtech and software as a service. This claim isn’t backed by data, but it’s a trend that has typically played out in Palo Alto and Mountain View, the two main cities of the original Valley, when the latest computing devices have been launched—and, when electric vehicles (EVs) became the latest gizmo in town, courtesy of Tesla.

In the middle of 2012, as Ashlee Vance writes in Elon Musk: How the Billionaire CEO of SpaceX and Tesla is Shaping our Future, “Tesla Motors stunned its complacent peers in the automotive industry. It began shipping the Model S sedan. The all-electric vehicle could go more than 300 miles on a single charge. It could reach 60 miles per hour in 4.2 seconds…”

There was more, for the technophile. The Model S had an internet connection (almost a decade ago). “While the owner slept, Tesla’s engineers tapped into the car via the internet connection and downloaded software updates. When the customer took the car out for a spin in the morning and found it working right, he was left feeling as if the magical elves had done the work.”

Unsurprisingly then, writes Vance, the first people to notice what Tesla had accomplished were the technophiles in Silicon Valley. “…the early adopters proved willing not only to spend $100,000 on a product that might not work but also to trust their well-being to a startup”.

The much-anticipated EV ‘revolution’ in India is still a work in progress, with the country lagging the big markets like the United States and China by a bit. And most of the EVs sold in India are two-wheelers and three-wheelers. Clearly, the revolution would be truly on us when more and more sedans and SUVs are running on electric motors and electric battery packs.

The role of Bengaluru in fuelling that revolution can be debated, but what’s pretty clear is, as Forbes India’s Technology Editor Harichandan Arakali found out, Bengaluru is home to a bustling EV startup ecosystem. One such exciting fledgling venture would be Ultraviolette Automotive, which is close to launching a high-performance motorcycle, which will go head-on against the heavier hogs in the 300-500 cc segment. For more on other startups in the EV race, don’t miss Arakali’s ‘Powering On’.

To be sure, EV action is all over the country, from startups to conglomerates. Deputy Editor Rajiv Singh tracked down a little-known venture that was founded in 2015, has a factory in Alwar in Rajasthan and which, in six years, has emerged No 2 in India’s electric scooter market.

The Forbes India cover story is on a traditional carmaker that’s come back into the reckoning and is attempting to do what several global and Indian carmakers have struggled with: To become an EV major to reckon with. By pumping in $2 billion over four years to launch 10 new EVs—$1 billion raised via private equity—India’s third-largest car maker is hoping to get a fifth of its sales from electric by 2025-26. On how Tata Motors plans to lead the charge in EVs and create the required ecosystem, Assistant Editor Manu Balachandran’s Tata Motors: The Phoenix Building India’s Electric Vehicle Play is a must read.

Tweets by @forbesindia
Special briefing: Sanat Rao, CEO of Infosys Finacle, unpacks some of the emerging trends in banking and the role of technology
Decoding the continuing frenzy around cryptocurrency trading