India's 100 richest: Should billionaires be celebrated?

The annual Forbes list of 100 richest Indians—researched and compiled by Asia Wealth Editor and India Editor of Forbes Asia Naazneen Karmali—is a recognition of their exploits in creating an economic surplus (which benefits both consumers and producers) through brands, products and services they have created to fill a crucial market gap 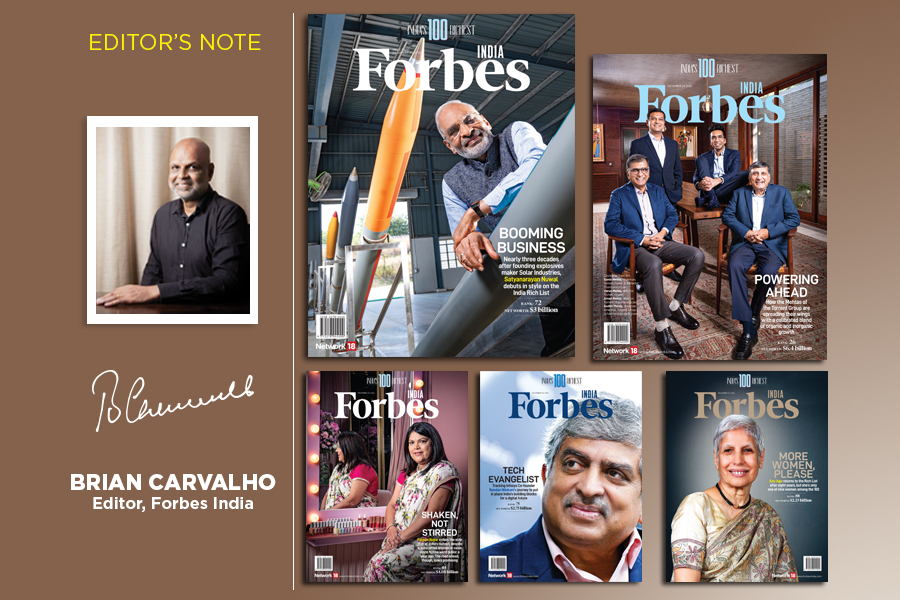 Why does Forbes India celebrate billionaires? There could be multiple answers to that question, not all of them on the money. For instance, many of the super rich did have humble origins, which make for vicarious stories of the rags-to-riches variety. But that’s not the only reason for making poster boys and poster girls of them. Rather, in most cases, it’s the problems they’ve helped solve with their innovations: Jeff Bezos with Amazon, Steve Jobs with the iPhone, Elon Musk with Tesla, and Larry Page and Sergey Brin with Google are testimony to that.

All billionaires may not be likeable people and, indeed, some of the most brilliant innovators have proven to be egomaniacs and poor people managers. Billionaires are entitled to do what they want with their wealth—splurging on mansions, jets and alimonies—but criticisms for not doing enough with their fortunes to address larger global problems are not unfounded. Sure, billionaire foundations globally and in India have done meaningful philanthropic work in areas like health, education and climate, but the needle hasn’t moved much when you look at the big, bleak picture of global poverty and hunger—surely, the 2,668 gentlemen and (few) ladies who are collectively worth close to $13 trillion can do better; even 1 percent of that wealth or $130 billion, as the Brookings Institution economist Homi Kharas wrote a year ago, is comparable with the annual official aid of roughly $160 billion from all countries and multilateral institutions combined.

The short point is that the super rich can do much more with their ample wealth. The shorter and larger point is that you don’t need to be in awe of their riches. Respect them instead for what they did to generate that wealth—the brands, products and services they delivered that has made lives easier for humankind.

The annual Forbes list of 100 richest Indians—researched and compiled by Asia Wealth Editor and India Editor of Forbes Asia Naazneen Karmali—is a recognition of their exploits in creating an economic surplus (which benefits both consumers and producers). In 2022, the collective wealth of these 100 grew by $25 billion to $800 billion. This comes on the back of a 50 percent surge in their combined wealth in 2021 to $775 billion, an addition of $257 billion since the 2020 list.

Debutants on the list are an encouraging indicator of a country’s entrepreneurial energy. The 2022 Rich List has nine new entrants, and two of them feature on the five covers in this special issue. One has Satyanarayan Nuwal, chairman of the Solar Group, a Nagpur-headquartered manufacturer of industrial explosives and ammunition, who debuts at age 70 with a net worth of $3 billion (including the family’s holding). It’s been a long ride for Nuwal, starting from Bhilwara in Rajasthan where he was born. As he tells Manu Balachandran, who’s penned this profile: “At the age of 18, I started a small business for chemicals and trading, but somehow, I could not become successful.” To read how Nuwal turned the tide with hard work and enterprise over decades, ‘The Explosives Billionaire’ on page 50 is a must read.

It’s difficult not to notice one harsh reality of such wealth listings—the smattering of women on them. There are just nine women among India’s 100 richest, of which five are self-made. To be sure, it isn’t just an Indian problem. Only 14 percent of the Forbes 400 list of the wealthiest people in the United States in 2021 were women. Samidha Jain decodes the historical, social and cultural reasons for this anomaly in ‘Still A Man’s World?’ The good news? It can only get better from here.

(This story appears in the 23 December, 2022 issue of Forbes India. To visit our Archives, click here.)

Tweets by @forbesindia
The rupee may be weaker, but the rich are richer
Photo of the day: Ready to parade