India's Top Digital Stars: A glimpse behind the scenes

A young and energetic bunch at Forbes India recently reckoned it was time to take stock of India's digital stars—a motley and sprightly mix of influencers and digital creators on social media. And this special issue is the result of that Forbes India-INCA project of epic proportions 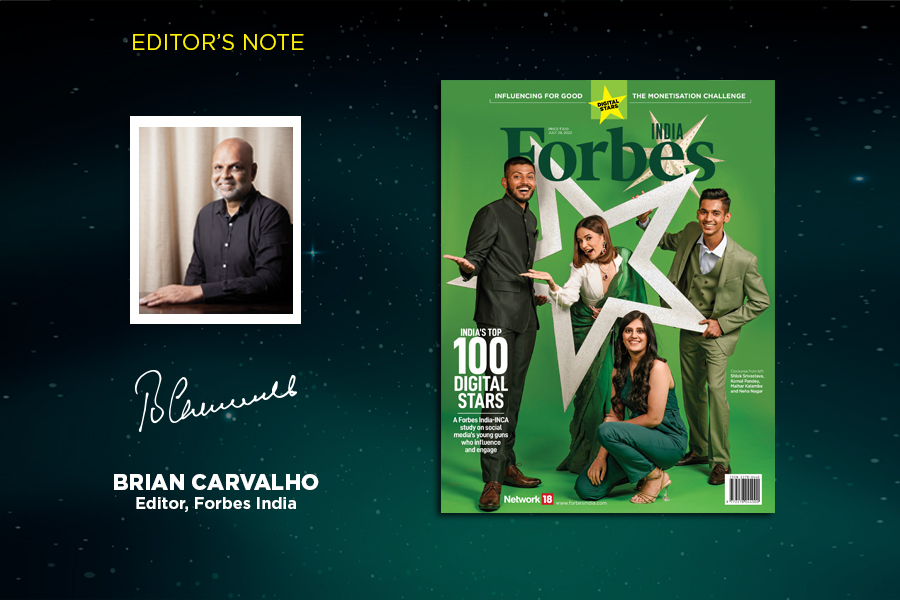 If influencers are those who, well, influence their followers to buy a product or service that they themselves use, who then would be the early birds in this game—in a world when social media didn’t exist? Note: We’re not talking celebrities here—actors and sportspersons who endorsed products from soap to soda (the nudge-nudge, wink-wink surrogate for moonshine). Rather, many of these influencers were strangers to fame, which only came after their maiden tryst with camera and product.

The first image that comes to mind is of a personality who would be considered a ‘bad influence’ these days: The Marlboro Man, created in the mid-50s and surviving till the late-90s. Although professional models were initially resorted to, the agency doing the commercials (Leo Burnett) eventually decided on a more natural rugged look, which they found in a real-life (non-smoking) rodeo cowboy.

Back home, the first non-celeb influencers entered Indian homes on colour television sets in the 80s. The outspoken, knowledgeable and value-for-money obsessed Lalitaji strode out of the screen to influence a generation about the merits of a particular washing powder with that memorable line: ‘Surf ki kharidhari mein hi samajdhari hai’ (Buying just Surf makes for an intelligent decision).

Another campaign that first hit cinema screens in the 70s before television and that caught the imagination of a perhaps younger demographic was the ‘Liril girl’—a bubbly 18-year-old who pranced under waterfalls with soap and lime slices for company. An entire nation of TV households came alive to the impish lass promising to make a “fresh, new woman of you”.

Lalitaji and the Liril girl are two influencers of the cinema and television generation that those of a certain vintage would recall. They surely did come to my mind when a young and energetic bunch at Forbes India reckoned it was time to take stock of India’s digital stars—a motley and sprightly mix of influencers and digital creators on social media. The similarities of these hotshots with Lalitaji and the Liril girl, in their ability to cajole an audience towards a certain brand, are striking. As are the differences: For instance, the digital creators go beyond personalities who influence an audience; it’s often their content, in the shape of videos, reels, graphics, blogs et al, that engages audiences and, in some cases, is able to make a difference.

Consider, for instance, 24-year-old Malhar Kalambe who has been counting on his social media reach (over 77,000 followers across platforms) for help in cleaning up Mumbai’s beaches. As Kalambe tells Divya Shekhar, who wrote the profile on the change maker: “It’s not just about turning up to clean the beaches and then going home, it’s also about starting conversations.” Then, as Samidha Jain writes in ‘Going Green, And Viral’, there are also the digital eco-warriors who use various social media tools to create awareness about climate change and sustainable living.

A few months ago, Forbes India and INCA, GroupM’s influencer and content marketing arm, set out to put out a list of India’s top digital stars across categories that include business and finance, tech, travel, beauty and fashion, among others. The results of that project of rather epic proportions—helmed by the relentless Naini Thaker for Forbes India—are there to see in the pages that follow, exquisitely designed by Senior Creative Director Kapil Kashyap.

It’s not all glitz and glamour for these young turks, for whom staying relevant particularly in rough macroeconomic weather is a challenge. The solution? Perhaps create your label, instead of playing influencer for others. For more on that, don’t miss Mansvini Kaushik’s ‘Never Too Merch’.

Tweets by @forbesindia
Alyssa Healy: The drive to be better makes a champion
Healthy in the wrong way: When food marketers don't listen