How does one capture that journey from the end of the dominion to the progress of what was once a fledgling nation? At Forbes India, we opted for a pragmatic version of the latter by capturing the journey with a selection of vivid pictures of some of the most noteworthy events and personalities in the Indian universe of economy and business. That, and don't miss our cover story on Wagh Bakri whose founder was born in 1947 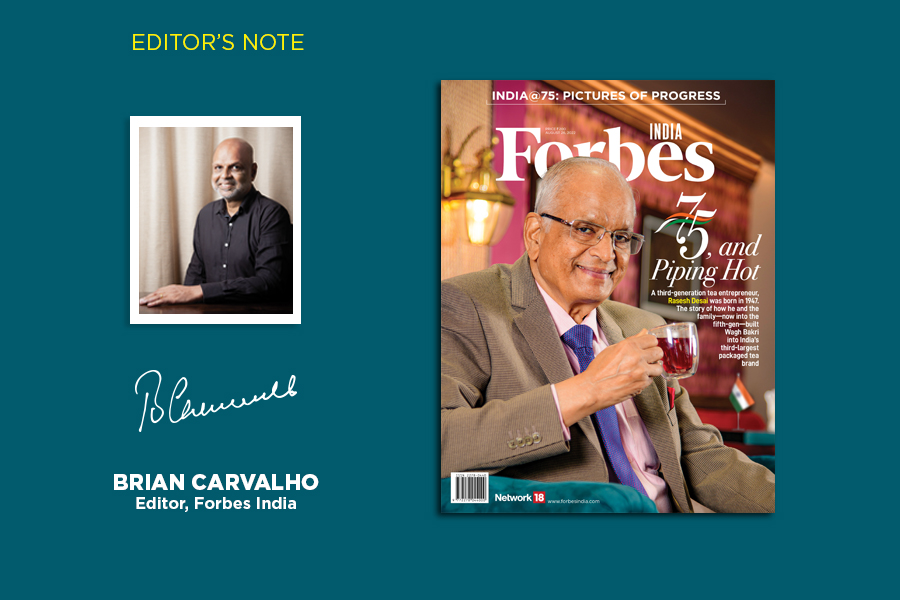 In 1981, Salman Rushdie wrote the epic Midnight’s Children, a mostly post-Independence, post-Partition allegory of history embellished with dollops of fiction and fantasy. The protagonist Saleem Sinai, born on the midnight of August 15 with telepathic powers, goes on to discover that all children born in India between 12 and 1 am have special faculties.

The magical elements of the novel—children “endowed with features, talents or faculties which can only be described as miraculous”—run parallel with a post-colonial country hurtling through the years, encountering new-found successes and familiar misadventures on the way. By Sinai’s 10th birthday, “freak weather-storms, floods, hailstones from a cloudless sky had managed to wreck the second Five Year Plan…” and the government had been forced to announce to the world “that it could accept no more development loans unless the lenders were willing to wait indefinitely for repayment”.

Yet Rushdie acknowledges the “substantial gains” of the first decade: “Production of iron ore almost doubled; power capacity did double; coal production leaped from 38 million to 54 million tonnes. Five billion yards of cotton textiles were produced each year. Also, large numbers of bicycles, machine tools, diesel engines, power pumps and ceiling fans.” The downside: Illiteracy survived unscathed; the population continued to mushroom, and the number of landless and unemployed masses increased, “greater than it had ever been under the British Raj”.

Midnight’s Children, if you leave out the fairy-tale, is a ride on a roller coaster of the first 31 years of India as a nation with everything from post-Partition tensions to Five Year Plans, (often laboured) industrial progress and the tribulations of the Emergency period thrown in.

The roller coaster still rumbles and, 75 years later, the ups may be more than the downs—at least on the economic and entrepreneurial front. It isn’t as if the human misery that Saleem wallows in from time to time has vanished; neither has the corruption and chaos. What is beyond doubt is that India isn’t any more alluded to on the global stage as a land of “monkeys dancing; mongeese leaping; snakes swaying in baskets…” In a globalised era, the country has found itself a firm seat on the world stage, economically, geo-strategically and culturally.

How does one capture that journey from the end of the dominion to the progress of what was once a fledgling nation? If you’re an author or a wannabe one, you’d be brave to attempt a work with the scope and ambition of Midnight’s Children. If you’re a historian, you’d likely relish chronicling the heady ride of the past 75 years.

At Forbes India, we opted for a pragmatic version of the latter by capturing the journey with a selection of vivid pictures of some of the most noteworthy events and personalities in the Indian universe of economy and business. It was a challenge but, for photojournalist Madhu Kapparath who burnt the midnight oil to curate a collection of a hundred photographs, it was indeed a labour of love. Don’t miss ‘India@75: Pictures of Progress’.

If Rushdie’s children of Independence were endowed with special faculties, Forbes India’s cover story is about a man born in 1947 who, you would be tempted to believe, has magical powers of his own.

Seventy-five-year-old Rasesh Desai is a third-generation entrepreneur at a tea business whose roots go back to 1892, to Durban, South Africa. Rajiv Singh has the story on how Desai, now with the fifth gen of the family, has built Wagh Bakri—a brand registered in 1934—into India’s third largest packaged tea brand.

(This story appears in the 26 August, 2022 issue of Forbes India. To visit our Archives, click here.)