Sanjeev Bikhchandani, a metaphor for freedom in entrepreneurship

From the onset of independence, India is a moving picture of individual action opening new frontiers in industrialisation, innovation and entrepreneurship--and our cover story this week on Sanjeev Bikhchandani is a wonderful metaphor for freedom of entrepreneurship and innovation 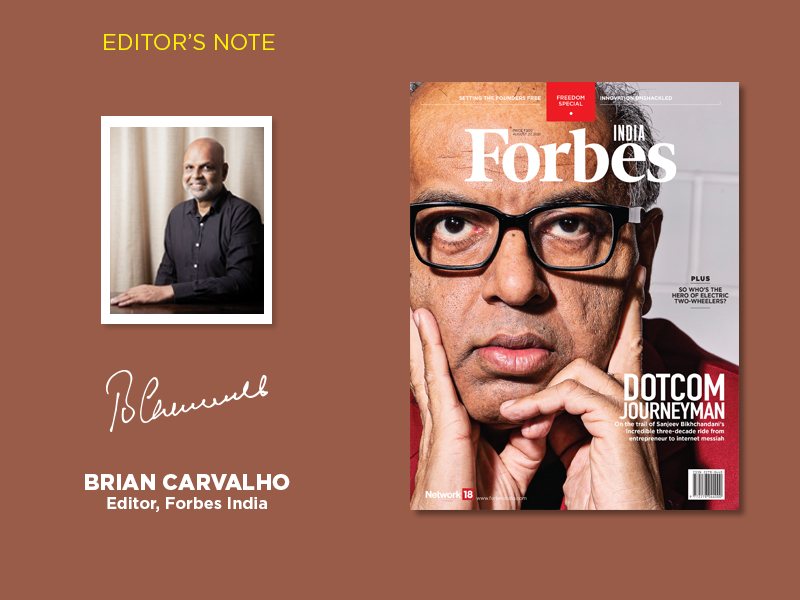 In 1962, the champion of free-market capitalism Milton Friedman, with the pioneering tome Capitalism and Freedom, ushered in the idea of how competitive capitalism can pave the way for economic freedom. And that economic freedom is a precondition for political freedom. Inspired by a series of Friedman’s lectures in the mid-’50s, Capitalism and Freedom has lessons for an India that’s debating how far the benefits of economic liberalisation have trickled down 30 years later in a country where millions may have plunged below the poverty line because of the Covid-19 pandemic. Friedman’s book also has lessons for a country whose status dipped from ‘free’ to ‘partly free’, as per the ‘Freedom in the World’ report of 2021 (the government in a statement termed the report “misleading” and incorrect”).

Friedman said there are two ways to benefit from the promise of government without it threatening the idea of freedom. One, by focusing firmly on law and order, enforcing private contracts and fostering competitive markets. And, two, by ensuring government power is dispersed. The pro-centralisation camp may point out that it allows for more effective legislation of programmes that are in the interest of all citizens. Yet, as Friedman wrote, “The great tragedy of the drive to extend the scope of government in general is that it is mostly led by men of good will who will be the first to rue its consequences.”

Friedman’s short point is that government can never duplicate the variety and diversity of individual action that are vital to open new frontiers. After all, Columbus, Newton, Einstein, Shakespeare, Edison and Ford didn’t break new ground in response to governmental directives.

In India, when nation-building was an imperative post-Independence, the government had a key role in driving industrialisation. However, the ‘Licence Raj’ till the ’90s—when governments regulated production—is a classic instance of heavy-handedness. What is more, many colossal public sector undertakings that were so necessary post-Independence had outlived their utility by the ’90s.

Economic liberalisation helped launch a thousand and more entrepreneurs. Yet, from the onset of Independence, India has been a moving picture of individual action opening new frontiers in industrialisation, innovation and entrepreneurship—in alternating phases of generous government intervention and without it. From JRD Tata launching India’s first international airline; to Brijmohan Lal Munjal setting the wheels in motion for what would become the world’s largest cycle maker; to the founders of today’s rush of startup worth billions of dollars, Madhu Kapparath charts this riveting journey of enterprise over the past 75 years.

The Forbes India Cover Story is a wonderful metaphor for freedom of entrepreneurship and innovation. When Sanjeev Bikhchandani chucked a job in 1990, he wanted to create his own road, but he wouldn’t have known about the milestones that awaited him—after the unshackling of 1991 came the internet in the  mid-’90s that gave wings to his dreams. It’s clearly not just about luck. As Bikhchandani told Naini Thaker, who pieced together his incredible three-decade ride: “If you are in enough places, enough times, for long enough, sooner or later you will be in the right place at the right time.” For more on that remarkable story of persistence, ‘India’s Internet Pioneer’ a must-read.

Tweets by @forbesindia
July hottest month in history; Ola launches e-scooters; and a chat with Shridhar Gupta and Vidit Jain of LocoNav
Final failure in Afghanistan is Biden's to own