NEET, JEE 2020 row: Is it time to consider remote testing?

The student community is divided on whether the medical and engineering exams should continue during the pandemic; experts say it may be time to consider innovative alternatives to the mass test 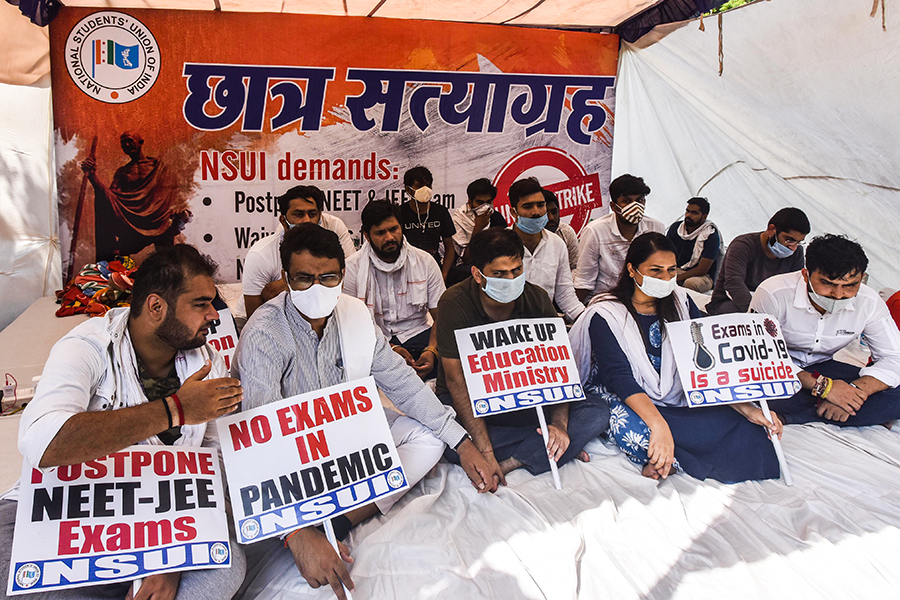 National Students Union of India (NSUI) activists sit on a hunger strike (Chhatra Satyagraha) against non waving of a semester's fees, declaration of conduction of JEE Mains and NEET amid the coronavius pandemic, in front of Education Ministry,  on August 27, 2020 in New Delhi, India. Image: Sonu Mehta/Hindustan Times via Getty Images

Eighteen-year-old Hitesh Sharma from Ahmedabad, Gujarat, is an aspiring doctor, and has been studying for the National Eligibility and Entrance Test (NEET) for medical education for three years. While Sharma is prepared for the test itself, he sides with the students protesting the NEET being held during the Covid-19 pandemic. This year, 15.97 lakh students have registered for the NEET, the undergraduate entrance exam for medical education, and 8.58 lakh candidates for the Joint Entrance Exam (JEE (Main)), its equivalent for engineering. While the JEE Main is scheduled between September 1-6, the NEET will be held on September 13.

These exams have already been postponed twice amid the novel coronavirus pandemic. JEE (Main) was originally slated from April 7-11, but postponed to July 18-23, and NEET-UG for May 3, then pushed to July 26. They were postponed again and are now scheduled in September. Students have been demanding further delay of the exams while others suggest following the schedule. Apart from the Covid-19 menace, students from flood-hit areas like Bihar, Odisha and Assam are concerned about commuting to exam centres with limited transport options. "My centre is far from the main city, so it is relatively safer in terms of Covid-19," he says. "Even so, I’m in favour of the protests. India’s coronavirus cases are increasing leaps and bounds each day, and on the day of the exam, 15 lakh students will be stepping out—some accompanied by their parents." The Supreme Court, on August 17, dismissed a plea seeking postponement of these exams, saying the students would waste ‘precious years’ and ‘life has to go on’. Since then, politicians have become involved in the protests too. "It seems like students are being misused for political agenda. Many senior politicians and opportunistic celebrities and bloggers are using the protests as a way to garner attention," says 17-year-old Dhruv Rambia, a Mumbai student who is scheduled to take the JEE (Advanced) on September 27, which a qualifying subset of JEE (Main) students take to apply to the Indian Institutes of Technology (IITs). He says the Advanced exam might also be delayed as a result of the delay in the Main exam. Rambia stands on the other side of the protests; he believes the Covid-19 crisis is challenging enough for the government without the hurdle. "Delaying the exams any further will only lead to our efforts going in vain,” he says, adding that he is willing to take the exams with safety protocols in place. “I don’t think that the students putting out videos on social media represent the opinions of all students; they are a minority." His mother agrees "The exams should definitely be conducted since these students have been preparing since three years. We trust the government and their safety guidelines. I feel students who are not prepared for the exam are actively protesting," she says.

Despite student protests across the country, it seems unlikely now that the exams will be further delayed. The Ministry of Education (MoE) says they will go ahead with the exams on schedule; Union Education Minister Ramesh Pokhriyal stated that since 7.5 lakh JEE students have downloaded the admit cards, they must want the exams to be conducted. For NEET, over 10 lakh of 15.97 lakh have downloaded their admit cards in 24 hours. Students, meanwhile, say they have no choice but to download the cards, if the exams are to run. Indore-based JEE aspirant Vranda Maheshwari, 17, says it is impractical to conduct the exams. "A small mistake could threaten the lives of the students’ families," she says. "Also, the virus is not the only hurdle—some cities have been flooded, others are on high alert. How will students travel to exam centres 8-9 km away?" SS Mantha, former chairman of All India Council for Technical Education, says that even if protocols are followed inside exam centres, the government cannot guarantee it outside the classroom. "If we cannot promise fair opportunity to all candidates, why hold the exam?" He adds that regardless, students will have lost an academic year even if the exams are held in September. "The assessments and declaration of results is a massive process. Students are understandably unhappy at the loss of a year," Mantha says. "It is another matter that the professional colleges will support the conduct because it is loss of revenue for them if exams are not held, all seats may not fill as a consequence." Most academics are in favour of the exams being conducted to avoid a ‘zero academic year’. Even so, many politicians and activists, including international climate activist Greta Thunberg, have insisted the Indian government reconsider the decision. Professor Thillai Rajan, department of management studies, IIT-Madras says, "[The exams] should happen. But the structure and format should be improvised to suit the pandemic context. Those who want to take the exam should be able to do so, others should not prevent them from doing so. They can get one more opportunity at a suitable time." On condition of anonymity, a professor who teaches NEET-JEE aspirants at an NGO in Uttarakhand said, most of the students he knows from these flood-affected areas do not want the exams postponed. "It will only increase stress for these students. Some students even expressed desire to commit suicide if the exams are delayed, which is frightening," he said. Is remote testing an option?
Perhaps the answer lies not in delaying the exams, but reworking their framework, experts say. For instance, a normalising algorithm could be used on Class 12 scores for admissions this year, adds Mantha, to save time and ensure safety. "In jurisprudence, it is said, if injustice is equally done to everyone in equal measure, that also is justice,” he says. “One has to weigh the available options both in terms of benefits and losses." Withholding the exams would effectively double the competition next year in an already cut-throat space, adds Praveen Tyagi, managing director of PACE IIT & Medical coaching institute, as the number of seats will not be feasibly increased. "One solution could be to conduct remote tests for as many students as possible, and have multiple test dates over a long period of time for the remaining students," he says. The government should have been working on an online mode in the early days of the pandemic, Mantha adds. "They could have sanitised mobile vans with access points to predesignated places for those who have no smart devices. There are some very robust online examinations and assessments solution providers in the country, their services should have been taken," he says. "Assessments can be done immediately, and result processing would then take only a couple of days. Only a crisis tests the mettle of everyone including the government," he says.