When will India's aviation sector take off again?

The sector, hit hard by the pandemic, will take a few quarters to get back to normalcy even after it resumes operations 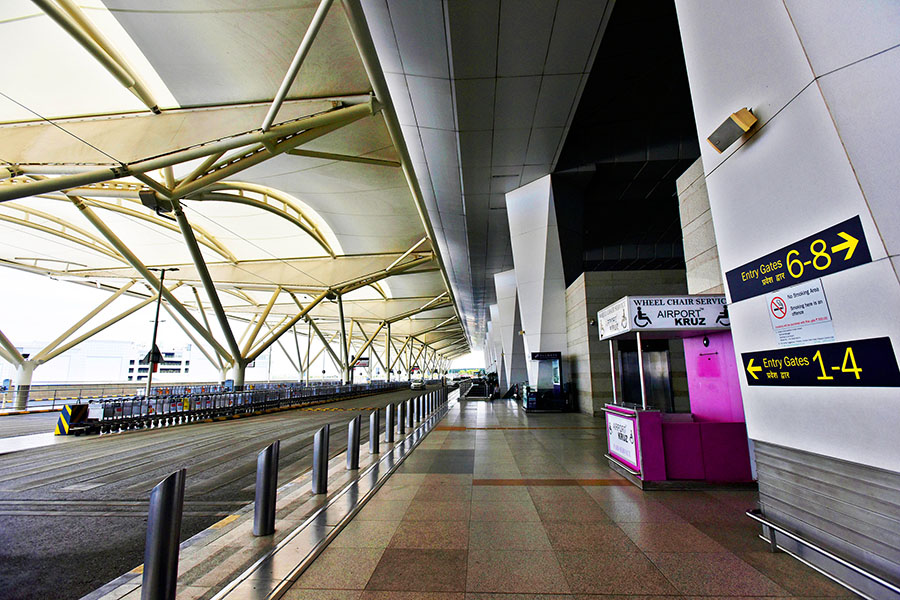 Delhi's Indira Gandhi International airport deserted on the first day of the national lockdown. Even when flying restrictions are withdrawn, India may take nearly a year to return to its pre-pandemic operational fleet of 650 aircraft
Image: Sanjeev Verma / Hindustan Times via Getty Images

India’s struggling aviation sector has just run into some severe turbulence. Even after the government relaxes lockdown rules and passengers are allowed to take to the skies once again, experts feel the much-needed recovery is months away, and could largely depend on the country’s economic fortunes.

“For India to return to a pre-Covid-19 operational fleet of 650 aircraft is likely to take up to 12 months from the time restrictions are lifted, and this may be a conservative estimate,” said Centre for Asia Pacific Aviation (CAPA), an aviation consultancy firm, in a report. “It assumes that Q1FY21 will be almost written-off, with traffic limping back during the weak second quarter, followed by a gradual trajectory towards normality during the second half of the financial year.”

Many of India’s airlines are accepting bookings for travel after May 31. Earlier, IndiGo, India’s largest airline by market share, had announced plans to begin operations by May 4, but the move was curtailed by the Directorate General of Civil Aviation (DGCA). Now, as and when airlines begin operations, they are expected to adhere to standard operating procedures laid out by the DGCA.

Ahead of the lockdown announced on March 24, the DGCA had asked airlines to ensure that middle seats in aircraft were kept vacant to ensure social distancing between seated passengers. “It is not practical for airlines to follow such rules and operate with 40 percent less capacity,” says a senior executive at a domestic airline. “You can’t expect airlines to make any money.”

The Airports Authority of India (AAI) and private airport operators have begun drawing up standard operating procedures for airports. “Once the lockdown period is declared to be over, airports shall be facilitating limited domestic and international scheduled flights in phases, to start with maybe at 30 percent capacity to facilitate required social distancing,” the AAI said in a note to airports. “Operations to their original levels are likely to be scaled up in a gradual manner.” The AAI, which manages more than 100 airports across India, further added in the note: “Limited food and beverages and retail outlets to be made available to the passengers till operations of airlines gradually increase. Initially, they should serve tea/coffee etc with takeaway snacks in boxes.”

Yet, despite all these plans to resume operations, recovery for the sector isn’t likely anytime soon. CAPA already reckons that domestic air traffic will decline from an estimated 140 million passengers in FY20 to around 80 to 90 million in FY21, while international traffic is expected to fall from about 70 million in FY20 to 35 to 40 million in FY21. “The combination of Covid- 19 related travel restrictions and an economic downturn is likely to result in Q1FY21 being a virtual washout for the Indian industry,” CAPA noted in its report. “The second quarter is historically the weakest period for demand and hence airlines are only likely to limp back into recovery. As a result, the majority of the fleet is likely to be surplus to requirement during the first half of the financial year.”

In the meantime, however, airlines are also grappling with revenue losses, and have begun to cut salaries and, in some cases, even jobs. On April 29, SpiceJet, India’s third-largest airline, told its pilots that the company will be unable to pay salaries for April and May. "We will not be getting any salary for April and May 2020. Those of us who have been flying cargo will get paid for the block hours flown,” the airlines said in an email to pilots. SpiceJet is yet to respond to queries from Forbes India.

Other domestic airlines such as Vistara, GoAir, AirAsia India and Air India have also taken steps to cut salaries. IndiGo, India's largest airline, had rolled back its proposed salary cut for April after executive committee members and senior vice presidents volunteered to take pay cuts. “This is perhaps the biggest mistake airlines are making at the moment,” says Mark Martin, founder of Dubai-based Martin Consulting says. “It’s not that India’s growth will slow down forever. The economy will revive, and travel will swing back. But if you leave employees in the cold now and if they are forced to leave, you will have to pay them a premium when travel picks up.” 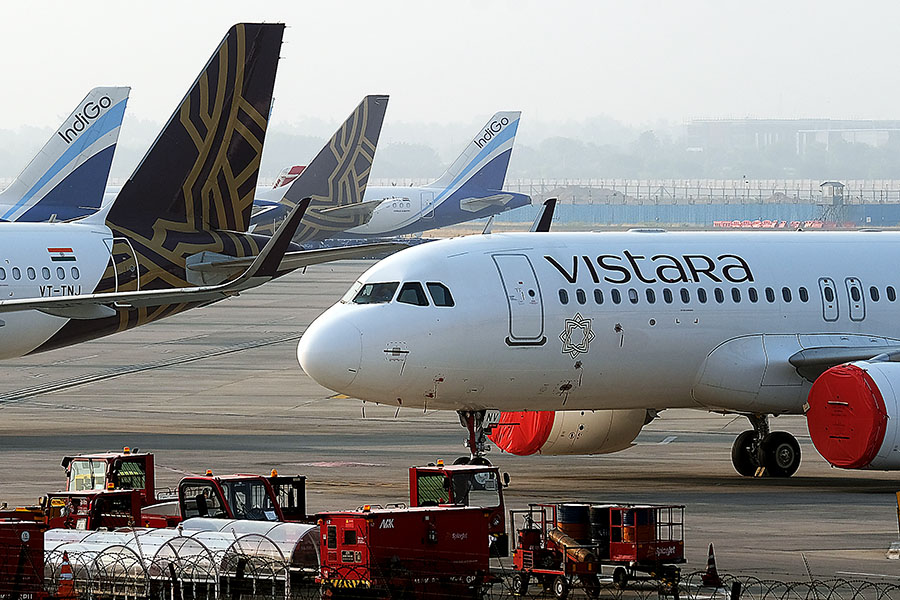 When operations resume, airlines will have to adhere to social distancing norms and fly at 40 percent less capacity, leading to losses
Image: T. Narayan / Bloomberg via Getty Images


Then, there is the anticipation that fares could see an exponential hike once the lockdown is lifted, and airlines are forced to adhere to social distancing. “When the lockdown is eventually lifted, there will be a wave of travellers. First will be those students and passengers who will be willing to fly back,” Martin adds. “Then there will be the second wave that has business to finish, and they will be willing to pay additional for the seats. What we are seeing is a situation where, for the first time, the airline industry is struggling for no fault of its own.”

Yet, others expect the current situation to change the travel industry forever. “TCS has asked about 80 percent of its employees to work from home,” says KG Vishwanath, director at Trinity Aviation Consultants and the former head of commercial strategy at Jet Airways. “There are many others who could follow suit. That means a lot of people who would otherwise travel to meet relatives or travel home will not do so anymore. Even from a work perspective, the current situation has ensured that work can be done remotely. So, there will be demand disruption across business and leisure categories.”

Besides, paranoia about the Indian economy and job security could also lead to lower discretionary spending. “In such a situation, airlines can’t quite increase the fares,” adds Vishwanath. “But at the same time, it will also lead to further capacity cuts. That will bring an equilibrium, and in that sense, the next 12 to 18 months will be quite dynamic, from a capacity point of view.”

CAPA reckons that the timing would be perfect for airlines to rationalise their fleet. “This may be the best opportunity for Indian carriers to take difficult calls to rationalise their operations and clean up their balance sheets,” it says. “Consolidation, collaboration, and supply-side correction should enable airlines to move away from market-share driven strategies such as loss-leader pricing. Aggressive expansion without the necessary cash and balance sheet has been repeatedly shown to be a very high-risk strategy.”

That would also mean holding off on orders that airlines have placed earlier. India’s airlines have a combined order book in excess of 500 aircraft, of which IndiGo alone had asked for more than 300. “Starting from the end of April, Indian carriers are initially expected to seek to return up to 100 aircraft to lessors, especially older equipment and those that may be closer to the expiry of their terms,” CAPA says. “The number of returned aircraft will continue to increase significantly up until September 2020, possibly reaching 200-250, or even higher. Since aircraft lessors will have limited customers to whom they can remarket returned aircraft, they may be willing to negotiate temporary rental holidays.”

However, there seems to be some silver lining in terms of low fuel prices, which account for nearly 50 percent of operational costs for airlines. Prices of Brent crude closed at $22 per barrel on April 29 in comparison to over $72 per barrel a year ago “But it is only when airlines begin operations that they will benefit from lower oil prices,” Martin says. “With some level of precaution, around 40 percent of the fleet can be deployed by September.”

All this means the sector could take a few quarters to return to stability. “I would think that it will take another two to three quarters for the sector to return to normalcy,” says an executive at an airline. “If we were anticipating growth this year, what we are likely to see is capacity reduction. We have probably lost two years of growth.”

(This story appears in the 22 May, 2020 issue of Forbes India. To visit our Archives, click here.)

Tweets by @forbesindia
How Forex brokers make money
Repeat after me: The markets are not the economy