A day in the life of a security guard, who is the least secure—physically and financially

Karnal Singh's work hours have doubled but his salary has reduced to a trickle, and while he ensures customers practice social distancing to keep them safe, there's little he can do to secure his own family of six 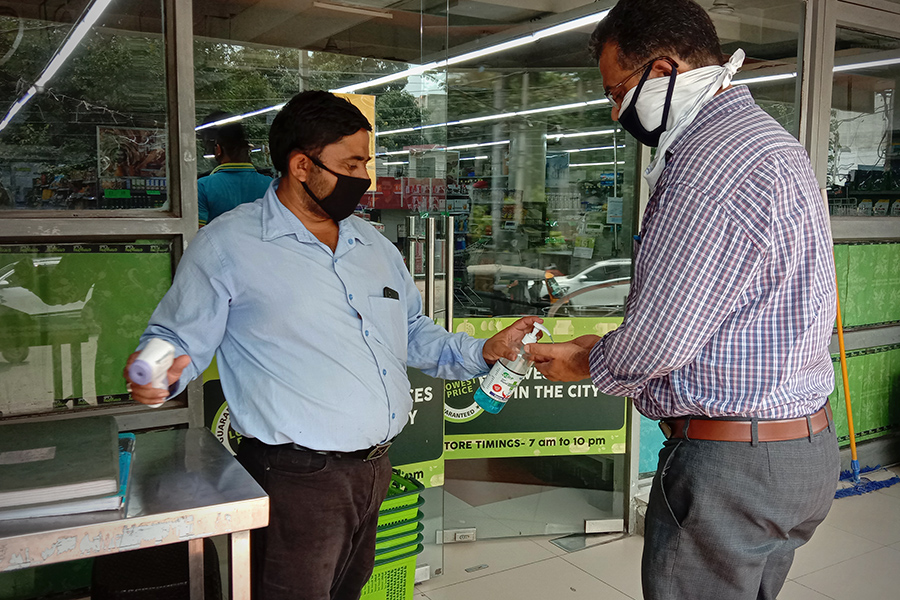 “Why would anyone want to read about me?” Karnal Singh was bewildered when we asked to interview him. He then looked to his superior for approval. The situation was so peculiar to him that he wondered if he had committed a crime and was now being investigated (which he later told us, facetiously, once he was comfortable). Singh, a 37-year-old security guard at a retail store in Model Town, Jalandhar, Punjab, hails from a small town in Firozpur district in the state. “I came to the city in the month of February, looking for work; I found this job and have been working here since.” he avidly starts the conversation. His wife and he live in a rented apartment here. “I have three adorable kids; they stay with my mother in Firozpur. I am really worried about them and the thought of them contracting the disease scares me a lot, but I can hardly do anything to protect them.” says Singh. Initially, Singh’s agreed-upon work hours were from 6 am to 2 pm, but he now has to work for 13 hours every day—from 6 am till 7 pm. While his work hours have increased, his salary has taken a hit. “I am not being paid properly; when I first joined I was promised Rs 8000 per month but in the past four months all I have received is a total of Rs 8000.  Whenever I ask my boss regarding my pay, he says that business hasn’t been doing well and there is no money.” He then asks to be excused and goes to screen the customers entering the store. Being the bearer of essential commodities, a large crowd could be spotted inside the store, how negatively the sales would have been affected is highly debatable. Singh, the sole earner of a family of six⁠, has been managing two households (in Jalandhar and Firozpur) with just Rs 8000 for 4 months now; he doesn’t know when and if he’ll get his next payment.

When asked about the daily struggles at work, Singh looks around to make sure no one is listening and says,
“Sometimes I feel people don’t realise the intensity of the problem, it gets difficult to convince some customers to maintain social distance. I have been shouted at a few times for asking them to do so. Except that, while I deal with several people entering the shop, they rarely acknowledge my presence, so it’s a rather lonely job.” He points out the irony of his profession. “While I try to secure the premises from a potential Covid-19 carrier, I myself am the least secure, both physically and financially.” The fight against coronavirus has brought to the fore the glaring gap between the value our frontline warriors, like security guards, add to society and the low wages and lack of respect they earn in return. Singh is optimistic that the pandemic will be contained soon. “God is looking over us; he’ll get us out of this. But we’ll have to be cautious too. My wife and I step out of the house only when it is necessary. Everyone should do the same, even when the country opens up.”
This is part of a daily series on how Covid-19 has upended the lives of essential workers across the country. Read more here