How do you stay on top when your core business is a commodity and you measure profits in hundredths of a percentage point? You build the best risk-management software on Wall Street 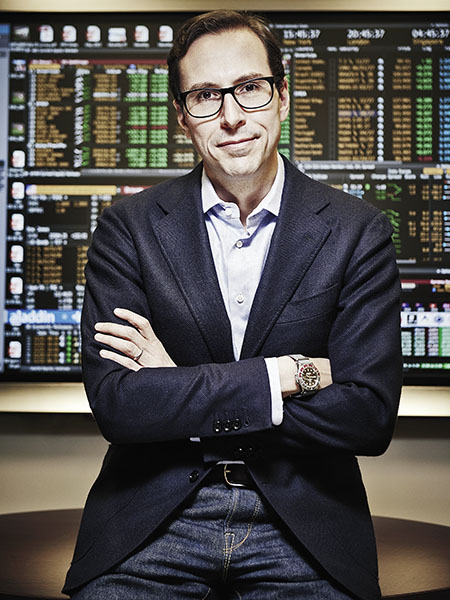 
On a large flat-screen monitor perched in front of a framed orange-and-blue Warhol print of Teddy Roosevelt as a Rough Rider, BlackRock’s chief operating officer, Rob Goldstein, is looking over the entirety of the financial firm’s $6 trillion in global assets—135 teams with positions in hundreds of markets in 30 countries. He is using software that he’s been perfecting for the 23 years he has spent at the company. A simple grey column on the left reveals BlackRock’s activity on this quiet pre-Thanksgiving day: There are some 25,000 trade orders in the market, 77,000 trades and thousands of collateral calls. A wider view colourfully identifies the specific portfolio managers and traders initiating the moves.

The program is called Aladdin, shortened from the wonky Asset Liability and Debt and Derivative Investment Network, and it can expand and contract like an accordion, from a holistic view of firm-wide risk down to a single trade in a split second. It is the reason Goldstein, 45, is a favourite to run BlackRock one day, despite the fact that he has never placed a trade or made a market call during his tenure. His ascendance at the financial giant speaks volumes about the state of asset management today—a business dominated by the explosive growth of passive index funds all racing to the bottom on fees.

“The ability to have a dashboard for running a firm like BlackRock that’s as simple as the dashboard in a car is a remarkable feat,” Goldstein confidently states. “One system, one database, one set of models. I know the vast majority of people don’t have this.”

But what’s on the screen in Goldstein’s office is only a glimpse of what Aladdin can do. Rick Rieder, CIO of BlackRock’s $1.7 trillion fixed-income business, uses it to track and analyse the risks embedded in his thousands of complex holdings. He loads his $31 billion Strategic Income Opportunities Fund to show how the portfolio will react to different market environments. A scenario called “Eurozone Breakup” will cost Strategic Income 79 basis points of performance relative to Rieder’s targets, Aladdin calculates, displaying asset-by-asset and risk-by-risk where the impact is acute. “China Credit Crunch” would be twice as painful. Strategic Income’s biggest potential risk? “Spring 2013”, a repeat of the taper tantrum, when the Federal Reserve signalled it would unwind its stimulus efforts, causing bond yields to surge.

“If I buy an asset, I know exactly what it’s going to do to the rest of the portfolio,” Rieder says. When North Korea fired missiles over Japan last fall, he used Aladdin to check whether he was overexposed to the market and saw he would need to buy about $400 million of Treasuries to manage the risk.

“Aladdin is like oxygen. Without it, we wouldn’t be able to function,” says Anthony Malloy, CEO of $238 billion (assets) New York Life Investors, one of hundreds of firms outside of BlackRock paying fees to use Aladdin. Daniel Pinto, CEO of JPMorgan’s investment bank, adds, “It allows our clients to trade across asset classes, conduct sophisticated risk analytics and oversee their portfolios in a very integrated data environment.”

It’s no accident that a piece of software may be the single most important differentiator for BlackRock. From the firm’s modest beginnings as a bond manager in 1988, CEO and co-founder Larry Fink put data analysis and risk technology at the forefront, instead of treating it as second fiddle to portfolio managers and traders.

BlackRock’s Aladdin counts 200 financial firms as clients and has 25,000 users

“The roots of the organisation were founded on the concept of risk management and technology,” says Fink. In an era of disruption, BlackRock is reporting record operating margins, and its stock is the best performer on Wall Street, returning on average of 23 percent per year since its IPO in 1999.

Raised in the Canarsie neighbourhood of Brooklyn, Goldstein graduated from high school at 16, opting for less expensive SUNY Binghamton over offers from private colleges because his father had promised him a new car. A nerdy Grateful Deadhead, he joined relatively small BlackRock in 1994 at the age of 20. His small team valued mort­gages, producing computer-crunched internal risk reports, called “green packages” for the paper they were printed on. He hoped his back-office job would be a springboard to a more glamorous and lucrative post as a bond salesman.

Instead he became more entrenched in the unit as BlackRock turned its risk technology outward, using it to help General Electric liquidate the mortgage portfolio of Kidder Peabody. Then in 1998, a 25-year-old Goldstein led BlackRock’s effort to licence its analytic firepower to Freddie Mac, which used it to value over $500 billion in mortgages. By 2000, demand was so great a business unit was formed around the software called BlackRock Solutions. Goldstein was a key leader.

Every time BlackRock gobbled up new assets, Aladdin was refined. Monitoring stocks and European markets were added when the firm bought Merrill Lynch Investment Managers in 2006. Later it gained expertise in ETFs with BlackRock’s opportunistic purchase of Barclays Global Investors in 2009 for $13.5 billion. Another break came during the financial crisis, when understanding exposures to failing firms and assessing potential losses became paramount. In 2008, Aladdin was used by the Fed when it took on the assets of Bear Stearns, and then by the Treasury to rescue the financial system. During the European debt crisis, Aladdin was hired by the central banks of Ireland, Greece and the ECB.

Today Aladdin counts some 200 financial firms as clients, with 25,000 users, monitoring some $18 trillion in assets on the platform. It carries out a quarter-million trades daily and billions of forecasts weekly. Roughly a quarter of BlackRock’s 13,000 staff are devoted to technology, with close to half focussed on Aladdin. BlackRock Solutions is on track to generate $700 million of the firm’s $12 billion in revenues this year, up by 15 percent.

Aladdin is pushing into retail, where BlackRock believes rigorous quantification of risk and scenario forecasts can help financial advisors (FAs) and individuals build better financial plans. BlackRock has already made numerous bolt-on investments: FutureAdvisor, Scalable Capital, iRetire and iCapital. Five wealth-management firms, including UBS, are now using Aladdin. If the FAs like the technology, they may also buy BlackRock products.

Besides being career changing, Goldstein’s software is a big reason why analysts and hedge funds like Dan Loeb’s Third Point gush over BlackRock.

“We see BlackRock as far more than an asset manager dependent on market movements,” says a Third Point investor letter. Some, like Macrae Sykes, an analyst with Gabelli & Co, are even comparing the behemoth asset manager to Amazon. “Am-Rock reminds me of the qualities of Amazon,” Sykes says, “driving efficiencies for clients, generating strong growth and pursuing a relentless approach to competitive positioning.”

Tweets by @forbes_india
Winds of change with reverse auctions
I see a different confidence in luxury: Ermenegildo Zegna