Anschutz is gearing up for one last act, moving from fossil fuels to—gasp!—renewable energy. But he's in it for a different shade of green. Will Anschutz's $8 billion wind farm be his ultimate windfall? 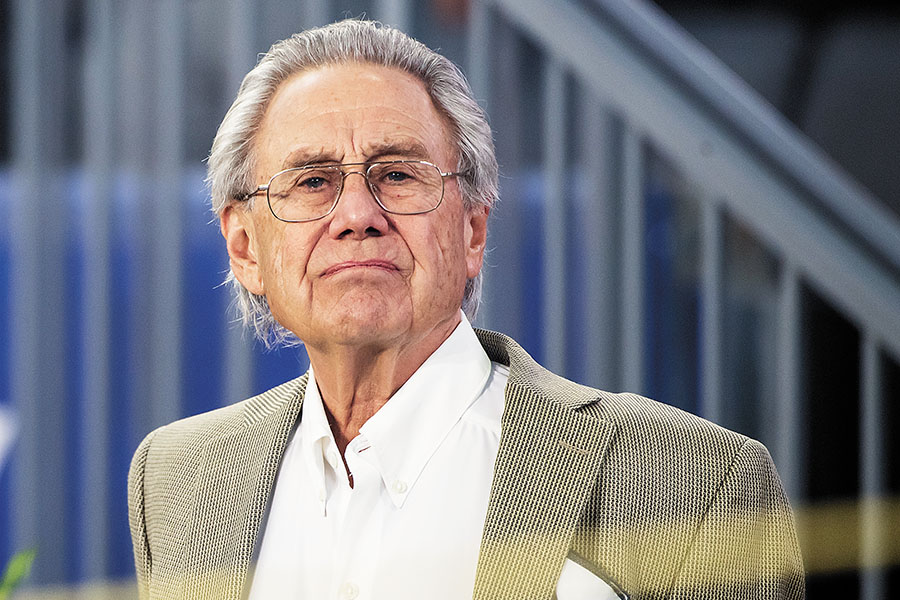 He owns the LA Kings NHL team, nearly a third of the NBA’s Lakers, and the Staples Center, where they both play. He runs the Coachella music festival, The O2 arena in London and The Broadmoor, the historic 784-room hotel in Colorado Springs. He bankrolled the Chronicles of Narnia movies and was backing Michael Jackson’s comeback tour when the pop star died. Anschutz doesn’t just love unique businesses—he’s obsessed. “My wife calls it a psychosis,” he says with a laugh.

Anschutz has a soft spot for oil, as that’s where he got his start, and fossil fuels form the basis of his estimated $11.5 billion fortune. He explains the favoured attributes of the 500,000 acres his oil company has been exploring in Wyoming’s Powder River Basin, where his team has drilled and fracked enough wells to be convinced they are sitting on more than a billion barrels. This could yield a bigger payday than the $2.5 billion he made in 2010 selling other oilfields. The best part, he says, is the way that his acreage “interfingers” with the holdings of bigger oil companies, which might like to buy it.

Anschutz, 79, is 5 feet 9, slim, well coiffed and sounds like actor Lorne Greene (more Battlestar Galactica than Bonanza) as he explains that his next—and perhaps last—big investment will not be in oil at all. Instead, fossil-fuel king Phil Anschutz is building America’s biggest wind farm.

It will cost $5 billion to erect 1,000 turbines at the Chokecherry and Sierra Madre Wind Energy Project on Anschutz’s 320,000-acre Overland Trail Ranch near Rawlins, Wyoming. Plus another $3 billion to construct a 730-mile direct-current transmission line to deliver that power (enough for 1.8 million homes) to the California grid. After Anschutz slogged through a decade of permitting, construction is under way. Workers have built 95 miles of work roads and prepped 115 pad sites for the first phase of turbine installation, which could begin in 2020 and finish in 2025. Anschutz has bankrolled the first $400 million out of his own pocket and is looking for equity partners or to raise debt to finance the rest. Just don’t expect him to give up control. “I want to see it built,” he says.

Is he doing this to greenwash his reputation? “No. We’re doing it to make money.” Though he believes excess carbon dioxide in the atmosphere “is a problem”, it’s “not as extreme as some would think”. What’s extreme is California’s new law mandating the transition to 100 percent renewable energy by 2045. He intends to profit from it.

Anschutz says the hardest work is already over. The permitting process culled a quarter of the planned turbines—in the windiest area, there will be 157 instead of 325. The only time he thought about selling the land was when the pro-coal factions of the Wyoming legislature succeeded in pushing through a new wind-generation tax of 0.1 cent per kilowatt hour—the first in the nation. Even little numbers add up when you plan on putting out 12 billion kWh per year.

“ The wind regime extends beyond our ranch to the whole gathering basin.”


In some ways, the permitting slog was a blessing in disguise. Over the last decade, turbines have improved in size, power and efficiency. According to Lazard, the all-in cost of generating a kilowatt-hour of wind power, without subsidies, has fallen from 13.5 cents a decade ago to 4.3 cents. Factor in federal renewable-energy-investment tax credits (a $2.8 billion value over the first ten years) and Anschutz’s costs should drop to 2 to 3 cents per kWh. California gets about a third of its energy from renewables and 40 percent from fossil fuels. For wind, which makes up 11 percent of supply, it’s been paying 3 cents per kWh, according to the department of energy. Anschutz’s long-term bet is that as tax credits expire and California’s 2045 target date approaches, wind power pricing will go up.

Anschutz has long been familiar with the ferocity of Wyoming winds. Fresh out of college in the 1960s, he started working at his father’s Circle A drilling company, which owned a handful of rigs in northern Wyoming. It wasn’t long before Anschutz bought his father out. In 1967, a crew did hit oil but lost control of the well, which ignited into a raging inferno. Famous oil well firefighter Red Adair requested $100,000 to battle the blaze, and Anschutz saved his company by getting Universal Pictures to pay that sum for the filming rights. (The footage was used in the John Wayne flick Hellfighters.)

Anschutz made his first mega-fortune in 1982, selling half of an oilfield on the Wyoming-Utah border to Mobil Oil for $500 million ($1.4 billion in today’s money). He reinvested in mining and railroads and built the Southern Pacific line, which in 1996 he sold to Union Pacific for $5.4 billion, valuing his shares in the new company at more than $900 million.

But wind was already on his mind. Anschutz marvelled at the wind farms built in the Sierra Nevada passes. “I started out just curious,” he says. “I had come out of the traditional energy business and thought, what’s all this?” Wind turbines looked to Anschutz like any other natural resource business—kind of like an upside-down oil well, sucking energy out of the air. And one that would never run dry. He asked Bill Miller, then president of his oil company, to find the windiest land in the nation, which turned out to be in Wyoming in the vicinity of the Overland Trail Ranch. Here, through the mountain gap that pioneers on the Overland Trail took on their way west, came big, steady winds, averaging around 20 mph.

Anschutz and Miller sketched plans for a wind farm with at least 1,400 turbines, figuring permitting would take about four years and they’d have it built by 2015.

Not so fast. The Bureau of Land Management required a voluminous Environmental Impact Study. There were negotiations with the Audubon Society and the Wyoming Game & Fish Department over how much land to set aside for sage grouse. The Oregon-California Trails Association wanted access to the wagon tracks still etched into the landscape. And the US Fish & Wildlife Service was worried about how many endangered golden eagles the turbines were likely to kill.

Anschutz paid for vegetation surveys, employed ornithologists, deployed avian radar, mapped eagle flights. He agreed to set aside the skies above 105,000 eagle-favoured acres as off-limits to turbines. Adjustments were made so that the “viewshed” from the Teton Reservoir would not be marred by the flickering of turbine blades in the distance. “We’d never seen a project of that scale before,” says Brian Lovett, administrator of Wyoming’s industrial siting division. “They were made to jump through a lot of hoops.”

It’s fun to do things other people think can’t be done, Miller says, recalling the oil pipeline that he and Anschutz built in the 1970s from Bakersfield, California, through Los Angeles to the port of Long Beach. “People thought we were stupid, but we did it,” Miller says. They got the same thrill risking $1 billion to lay thousands of miles of fibre optics with Qwest Communications in the 1990s. “You know how many customers I had signed up? Zero,” Anschutz says.

“But I knew the world was moving from voice-by-the-minute to data-by-the-megabyte.” He sees the same kind of bet in the transmission line that will carry wind power across four states, 16 BLM districts and the properties of 378 landowners.

America’s wind capacity will grow 60 percent in five years from a current 100,000 MW, according to consultancy Wood Mackenzie. If America is dedicated to decarbonising its energy sources, it makes sense to utilise the windiest places with the fewest people. “The wind regime extends beyond our ranch to the whole gathering basin,” Anschutz says. “If we can’t build it here, we can’t build anywhere.”