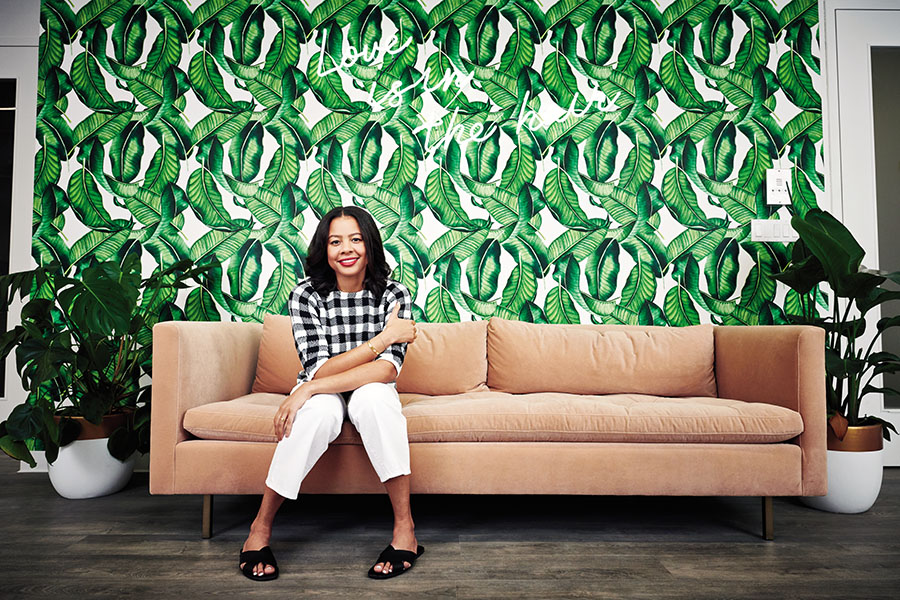 “We make everything from our own original product briefs, our own ideas, our own market research. We never go and select from some off-the-shelf formula,” says Briogeo founder Nancy Twine from her office in Manhattan’s NoMad neighbourhood
Image: Raina + Wilson for Forbes

A charcoal and coconut-oil shampoo that smells like mint cookies flows into dozens of 8-ounce tubs at a contract lab in suburban New Jersey. Surveying the tubs is 33-year-old Nancy Twine, who created the shampoo, a scalp-exfoliating formula that retails for nine times the cost of mass-market shampoos like Head & Shoulders. “This was a big one for us,” says Twine, founder of the hair care company Briogeo.

In recent years, as more and more beauty products are manufactured at independent labs, dozens of women have launched their own brands, from makeup artists-turned-bloggers like Huda Kattan to celebrities like Kylie Jenner. But Twine says her seven years at Goldman Sachs have given her a leg up, prepping her to price ambitiously, source ingredients directly, combine orders to save money on ­production runs and build relationships with partners. On retail shelves for just four years, Briogeo has been profitable every year of its existence and brings in more than $10 million in annual revenue from sales at Sephora, Nord­strom, Forever 21’s Riley Rose and sample services like Birchbox and Ipsy. “From the start,” Twine says, “I wanted to make sure that our margins were good, so that not only could we reinvest back in the brand but also so that down the line we never had to compromise.”

Twine, who identifies as African-American, is attempting to appeal to all women. Unlike many brands, Briogeo targets customers by hair texture (wavy, coily, dry, thin) rather than by ethnicity. “I remember going to CVS back in the day, and it was always segregated,” she says. In addition, Briogeo formulates its naturally derived products without sulfates (linked to skin irritation), silicones (may dry and thin hair), phthalates (potentially toxic in high concentrations), parabens (banned in the European Union; binds to estrogen receptors), DEA (also a skin irritant) and artificial dyes. “People were literally telling me you can’t do this without silicones,” Twine says. “I had to do my own research and tell chemists what they needed to be blending in order to get it to work better.”

Even though so-called clean beauty is one of the fastest-growing segments of the beauty industry, there are few non-toxic hair lines in general and even fewer for textured hair. That gap has created a big opportunity. Black customers purchased almost $500 million worth of shampoo last year, according to the research firm Mintel, and are the fastest-growing segment of the $13-billion US hair care market, according to Euromonitor. Most Briogeo products are priced slightly below other premium hair brands, a point of pride for Twine. The competitive price helped Twine convince retailers that her products could hit a new, hard-to-reach consumer: One who wants to buy a high-end, non-toxic product but at the lower end of the luxury range. “I love her price point because it says she’s taken the time to do her homework,” says Dana White, the African-American owner of Paralee Boyd, a budding Detroit chain of walk-in salons that cater to curly and textured hair. “We have money to spend.”

On retail shelves for four years, Briogeo has been profitable every year. It brings in over $10 million in annual revenue

The event that spurred Twine to start her business was a tragedy that struck in 2010, three years into her stint at Goldman Sachs. That was when her mother, a doctor-turned-chemist who had just finished creating a natural face cream she hoped to take to market, was hit by a car.

Her mother’s death was life-changing for Twine, who says she realised that working on Wall Street was “not how I should be living life”.

Inspired by both her mother and her grandmother, who taught her how to make products with natural ingredients, Twine started devoting nights and weekends to researching the beauty business. At New York City’s small-business library, she spotted reports of a shift toward natural skin care but saw little if anything suggesting a similar shift involving hair. And nothing she saw in the reports focussed on the luxury end of the clean hair market.

On her own time, while working at Goldman, Twine spent more than a year searching for a lab and chemist with the ability to create non-toxic products. It took another year to test hundreds of formulas. Twine named her startup Briogeo, blending the Italian word for “liveliness” with the Greek word for “earth”. By 2013 she had four formulas. “It’s the combination of clean beauty with identifying a specific consumer segment with a specific need,” says Marla Beck, the CEO and co-founder of the beauty retailer Bluemercury. “She saw that really, really early, so kudos to her for having vision for where the industry was going.”

Early on, Twine bootstrapped the business with her savings while looking for an investor. But she was pitching mostly to angel investors who specialised in tech and weren’t interested in beauty’s latest gold rush. Eventually, at a Long Island Angel Network event in 2012, Twine met Philip Palmedo, who liked her presentation but acknowledged he knew nothing about hair care. Early next year he gave her $150,000 for a small stake. Twine’s only outside backer, Palmedo says the decision violated everything he’s learnt about investing—but has been one of his most successful. “Decisions like this are intuitive,” he says. “Believing in the person.”

Briogeo’s first two orders—from Urban Outfitters and the buzzy Los Angeles boutique Fred Segal—came later that summer after Twine had taken vacation time to attend Cosmoprof, a Las Vegas trade show. It was there that she met Sephora’s buyers. In January 2014 the chain agreed to launch Briogeo on its website in the US and Canada. The next week, Twine gave notice at Goldman. Today Briogeo is the fastest-growing hair care brand on Sephora’s site. “She brings some of the most innovative and exciting products that we have seen in hair care to the table, truly,” says Artemis Patrick, Sephora’s chief merchandising officer.

To select packaging, Twine visited Sephora locations and turned bottles over to check the manufacturer. To source ingredients, she called up suppliers and asked if they would deal with her directly. “From the commodities and logistics business,” she says, “I always felt comfortable dealing with manufacturers. Some of my founder friends have a consultant do a lot of that work for them. It eats into your margins because they’re marking up the prices.”

Briogeo is now expanding into Sephora stores in the Middle East, Europe and Southeast Asia. A new line available at Sephora and elsewhere features a shampoo and a conditioner made with nutrient-rich superfoods like apple, kale and matcha extract. In July, the company also launched a shampoo and conditioner in a large “back bar” size for salons to use while washing clients’ hair. Twine expects revenue to top $15 million this year. “Goldman always had a client-first mentality,” she says. “Relationships are everything. That’s the same thing that I’ve applied here.”