Covid-19: How optimism raked returns for this Scottish money manager

Baillie Gifford didn't see the pandemic coming, but a positive attitude toward the overpriced momentum stocks in its $245 billion portfolio turned out to be perfect for life under lockdown 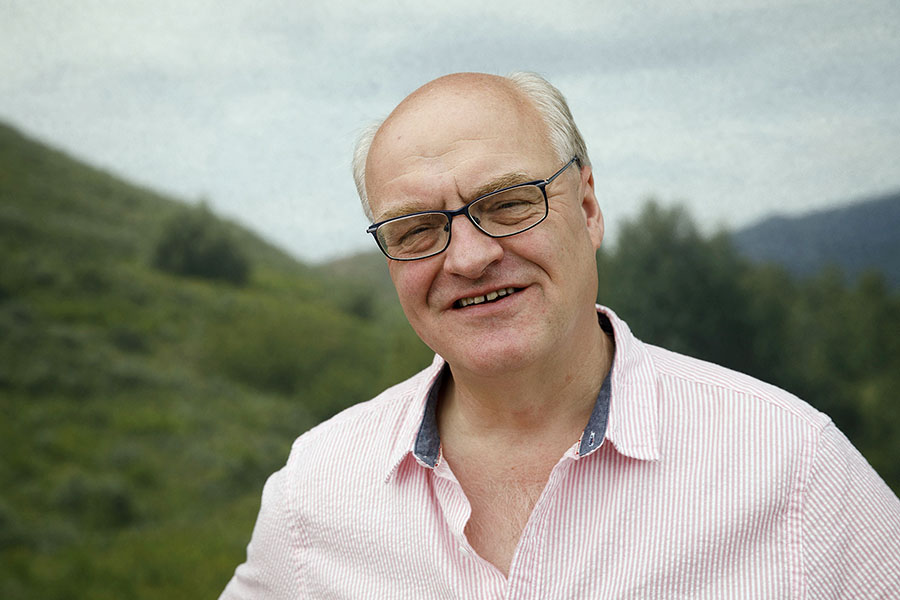 Baillie Gifford partner James Anderson believes in encouraging the companies they back to be brave
Image: Patrick T. Fallon / Bloomberg via Getty Images


When analysts and portfolio managers pitch ideas at Edinburgh, Scotland, investment firm Baillie Gifford, there’s one rule everyone must follow. For the first 20 minutes, anyone speaking about the idea has to be positive, contributing only to the bullish case for the stock. Say anything critical and you’re swiftly escorted from the room.

The optimism rule is designed to thwart what the partners believe is a natural tendency for smart people to be skeptical and shoot down ideas prematurely. But these days the rule takes on even more meaning as despair over the pandemic spreads. Like nearly everyone in the Western world, the firm’s 1,317 employees are no longer able to congregate at its headquarters, where an imposing sign over the entrance reads: ACTUAL INVESTORS THINK IN DECADES. NOT QUARTERS.

“One of the things we feel is absolutely incumbent on us at this moment is to encourage the companies we back to be brave,” says James Anderson, 60, a co-manager of Baillie Gifford’s flagship strategies and a 37-year veteran of the 112-year-old investment firm. Baillie Gifford has gone so far as to mail letters to its portfolio companies, encouraging CEOs to forestall layoffs and cost cutting. It even offered new capital so they could maintain their growth plans.

It’s an unusual stance for a large asset manager to take in a business landscape fraught with risks. But among fund managers, Baillie Gifford, with its $245 billion under management, is an outlier. The firm pays little attention to traditional valuation metrics such as earnings per share or price/earnings ratios. It’s singularly focused on three things—growth, competitive advantage and staying power—and it doesn’t mind parking its investors’ money in stocks that would make value investors seasick. Here’s a sampling: Zoom, the now-ubiquitous video-chat company, which has a price/earnings ratio of 400; ecommerce upstart Shopify, at 50 times revenues; online furniture merchant Wayfair, which lost $1 billion in 2019, double that of the prior year. But these very stocks, plus a good number of the 30 to 50 others held in each of their 14 mutual fund portfolios, are exactly the companies benefiting from existing trends accelerating during the crisis.

Name a hot coronavirus stock, and Baillie Gifford discovered it and built a massive position before the virus spread. The firm has long-held multibillion-dollar positions in Alibaba, Amazon, Tencent, Microsoft and Netflix. Newer buys include Zoom, Covid-19 vaccine hopeful Moderna, digital health upstart Teladoc and online textbook seller Chegg. It’s a large shareholder in Wayfair, which first plunged as Covid-19 spread, then rose eightfold when sales skyrocketed as quarantined customers made home improvements. Baillie Gifford is also a top holder of surging Covid stocks Grubhub and Peloton, the cycling platform many are using to burn off their “quarantine 15” weight gain.

Baillie Gifford’s returns to investors in 2020 have been nothing short of miraculous. Scottish Mortgage Trust, the $10 billion flagship Anderson co-manages, and a newer Long-Term Global Growth Fund with $40 billion in assets, are up about 20 percent year to date, beating the S&P 500 index by 30 percentage points. Both have posted similar average annual returns over the past five years, more than doubling the index. The firm’s newer funds centered on US companies driving “Positive Change” have also done well, climbing as much as 25 percent. Even funds that are down have trounced their benchmarks. 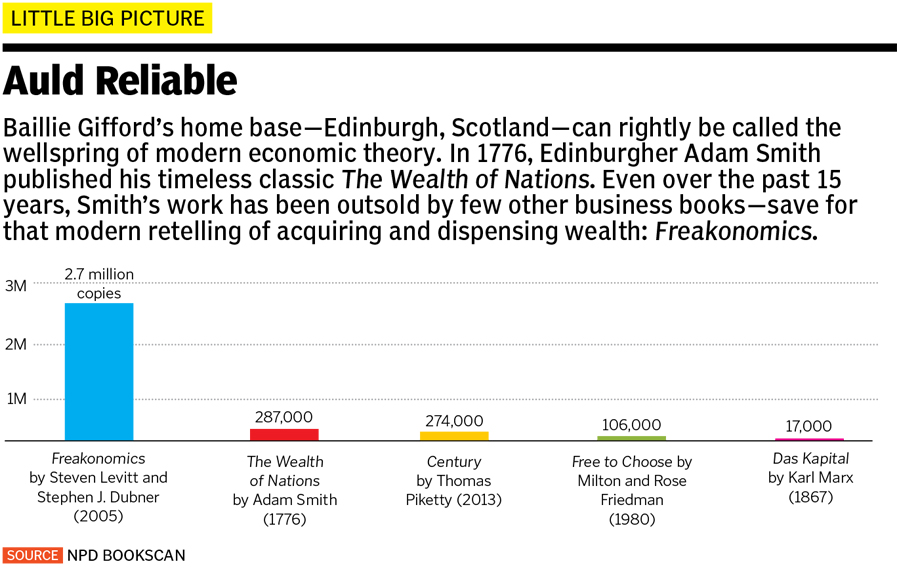 While private equity firms and corporate chiefs have spent the past decade making companies lean and leveraged, Baillie Gifford’s stock pickers ignore all that and seek out companies investing in research and technology. They particularly like projects that might not be immediately profitable but could propel the economy a decade from now. Quantitative investing is all the rage, but the Scottish firm is moving in the other direction, trading little and spending its research budget sponsoring literary prizes, investigating new philosophical ideas and endowing university chairs in genetics and computational biology.

Based in Edinburgh’s 18th-century “New Town,” a short walk from the city’s medieval “Old Town,” Baillie Gifford is too big and too old to be dismissed as simply lucky. The firm was founded in 1908, shortly after the Panic of 1907, by Colonel Augustus Baillie and barrister Carlyle Gifford.

The colonel had made his name fighting in the Second Boer War, while his partner, Gifford, later became known for helping finance Britain’s World War II effort by selling the crown’s trove of overseas assets, largely to investors in the US.

One of Baillie Gifford’s first trades was to lend to tyre makers, believing Henry Ford’s pioneering Model T automobile would revolutionise the world. After World War I, the firm decided America was a compelling “emerging market,” and built positions in railroads including Union Pacific and Atchison, Topeka and Santa Fe, eventually investing 20 percent of its assets in the United States. In the 1960s, it was an early investor in emerging Japan. 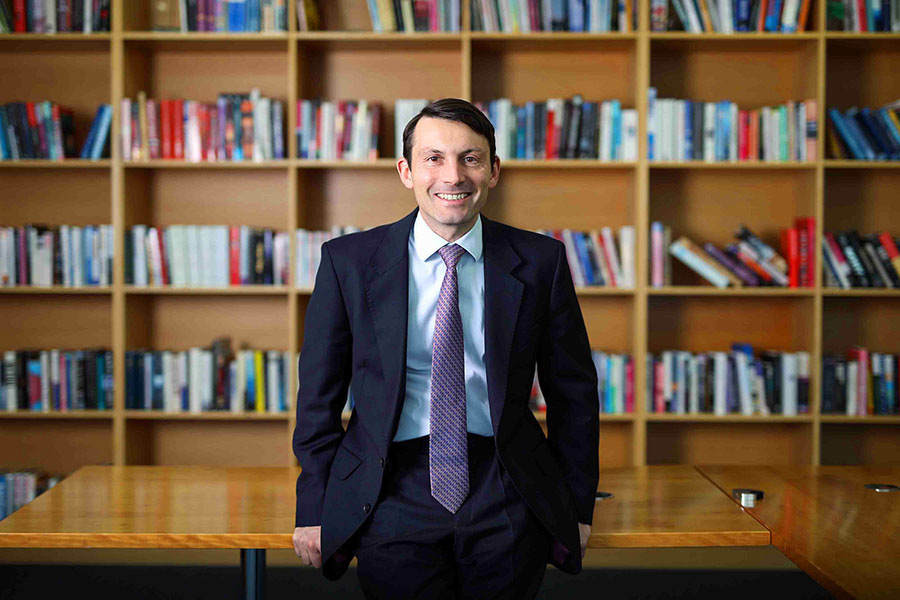 When the internet stock bubble popped in 2000, Baillie Gifford suffered a setback, but as investors fled companies like Amazon, the firm backed Jeff Bezos’ vision. It was Amazon’s remarkable resilience and success that birthed the firm’s think-happy-thoughts-first, be-critical-later approach. Its timing was perfect. Technology giants like Amazon, Google and Microsoft are now carrying the S&P 500. “We started noticing that big companies got better and got stronger, and their returns got greater as they grew, rather than the reverse,” Anderson says.

“If you can just hit one or two of those exceptional companies that really drive markets over the long run, then they’ll pay for the inevitable mistakes,” says Tom Slater, 42, who co-manages some flagship funds alongside Anderson. By 2012, the firm latched onto emerging trends like cloud computing and Asian tech leaders like Alibaba and Tencent.

Following the crowd for Baillie Gifford has led to some big misses, including Eike Batista’s ill-fated Brazilian oil company OGX, Vestas Wind Systems, LendingClub and Nio. It also holds stakes in troubled Airbnb and luggage maker Away. But wins like its 100-fold return on Amazon, 16-fold return on Tesla and a 17-fold gain on Naspers, the South African conglomerate that owns 31 percent of Tencent stock, have more than made up for its dogs.

Some $35 billion of Ballie Gifford’s capital is invested in China. Big holdings include surging delivery companies like Meituan-Dianping and budding ecommerce platform Pinduoduo. In Europe it owns HelloFresh, a meal-kit delivery company, and the Amazon of Latin America, MercadoLibre.

London-listed Scottish Mortgage Trust holds most of Baillie Gifford’s private investments, including stakes in Stripe, Ginkgo Bioworks, the biological engineering pioneer, and CureVac, the Bill Gates–backed coronavirus vaccine firm President Trump reportedly wanted to buy. The Scottish trust has risen fivefold over the past decade. Among its mutual funds available to US investors, Long Term Global Growth and US Equity Growth have performed best.

Baillie Gifford proudly embraces ESG (environmental, social and governance) investing. The firm says it works with Amazon on sustainability and worker conditions, encourages Google to pay more in taxes and voted against what it viewed as rich executive-pay packages at Apple.

What about the billions Baillie Gifford has reaped from its investment in Tesla, whose owner, Elon Musk, might be the poster boy for bad corporate governance? According to Anderson, Baillie Gifford grew concerned about Musk’s “pedogate” Twitter battle during the 2018 rescue of children from a cave in Thailand, as well as his infamous “$420” tweet about taking Tesla private, which led to SEC sanctions. But it still voted in favour of Musk’s recent $50 billion–plus incentive package, the largest potential payout in corporate history.

Says Anderson, “I think it’s incumbent on us to back the extraordinary appetite for  beneficial change and to look past any bumps in the road.”

Proving that optimism can pay, so long as you don’t sweat too many details.

Tweets by @forbesindia
Photo of the Day: Kolkata gets back to business
Breaking hierarchies in ICU to combat Covid-19