How Cree Perfected The 20-Year Lightbulb 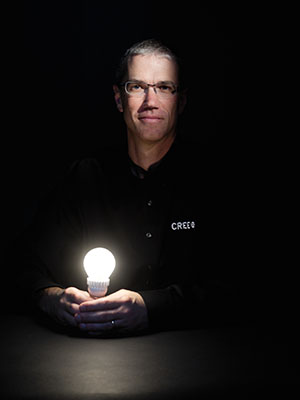 In the ad for Cree lightbulbs, snow whips across a desolate ﬁeld as a bagpipe creaks out ‘Amazing Grace’. An announcer holds up a lightbulb and speaks into the camera. “Mr Edison, today we lay to rest your creation, the incandescent lightbulb. I know you’re not shocked, sir. You knew that it needed an unreasonable amount of energy to do its job and that it had the life span of a lucky bug.”

He ﬁts the bulb into a tiny wooden casket and places it into a hole in the ground. Then we see Cree’s new LED bulb. “The biggest thing since the lightbulb,” we’re told.

It’s a fun commercial, and Chuck Swoboda, CEO of Cree, means no disrespect. “We made sure the Edison estate was okay with it,” he says. “There’s an Edison quote that has always been inspirational to us: ‘There’s a better way to do it. Find it.’”

Swoboda believes his company has done just that. More than 130 years after Thomas Edison created the ﬁrst saleable lightbulb, his design remains little changed. Electricity ﬂows across a resistant wire in an oxygen-free environment and glows. Cree’s lightbulb uses an array of light-emitting diodes to create a similar rich, warm light without the ﬂicker of compact ﬂuorescent bulbs.

It does so with unassailable economy. An incandescent bulb costs $1 and uses $7 of electricity a year if used three hours a day. A Cree bulb may cost $10, but uses 10 percent of the electricity, costing $1 a year. And while an old-school bulb will burn out in less than two years, LED bulbs will work for more than 20 years. At $9.97 for the equivalent of a 40-watt incandescent, or $12.97 for a 60-watt replacement, the Cree bulbs are cheaper than offerings from rivals.

That performance is a big reason Cree boasts $1.3 billion in sales and $70 million in earnings. Its market cap of $7 billion has doubled in less than a year; investors foresee broad adoption of LEDs once federal lighting standards force the phase-out of 40- and 60-watt incandescents in 2014. Of roughly 6 billion lightbulbs in American homes, 3.6 billion are incandescents. Lighting sucks up 14 percent of America’s electricity; replacing all those Edison bulbs with LEDs could cut that demand in half.

The Durham, North Carolina, company was founded in 1987 and went public in 1993. In those early years, it had a good business selling semiconductor chips made of gallium nitride that glow when an electric current is passed through them. But the early light-emitting diodes came in only two colours: Red and green.

The industry’s elusive Holy Grail was a ‘white’ LED. If they could somehow create a bright blue LED, they could combine it with the red and green to make what the human eye would perceive as white light. In 1994 a researcher at Japanese company Nichia proved it could be done.

Cree’s engineers followed soon after with their own bright blue LED chip made from wafers of silicon carbide. “Everything came from this,” says Swoboda, who joined the company in 1993, when it had only 30 workers. It now boasts over 6,000.

At ﬁrst, Cree just made the chips and sold them to the LED makers; early uses included backlit car dashboards and cellphones. The potential seemed so great that in 2004 analysts were calling Cree the next Intel. But white LED lights weren’t ready for the residential market. Early ﬁxtures cost too much and suffered from another then-unsolved problem: LEDs are a directional light source; they cast light in only one direction. That’s ﬁne if you want to spotlight something but a non-starter if your aim is to replace the all-around glow of incandescents.

It hadn’t even tried developing an incandescent replacement, instead focusing on municipalities and industrial customers. Anchorage, Alaska, replaced 16,000 high-pressure sodium streetlights with LEDs; Los Angeles is swapping out 140,000. Walmart installed LEDs at hundreds of stores. To proﬁt from this industrial market, Cree in 2011 bought ﬁxture manufacturer Ruud for $525 million.

So how to make LEDs mimic incan- descents? The key was in redesigning the filament tower in the middle of the bulb, with 10 or 20 LEDs of varying colours. Cree’s conﬁguration let the individual light sources overlap, creating an omnidirectional glow.

For now, Home Depot is the only place you can buy the Cree, part of an exclusive deal to roll out the bulb in more than 2,000 stores. “The exclusivity is to be negotiated. We will look at other partnerships at some point,” says Swoboda.

Home Depot expects to get some mileage: “We’ve worked together with Cree over nearly two years to develop what is the most affordable, highest- quality LED bulb on the market,” says Mark Voykovic, who oversees the partnership for the retailer.

But bulbs are just the start. Because they seldom need to be replaced, LED lights can be built into ﬁxtures and furniture. Professor Michael Siminovitch, head of the California Lighting Technology Center at University of California, Davis, envisions a world of LEDs programmed to change colour and intensity throughout the day, matching light from the sun. He thinks smart LED lighting will improve moods and reduce seasonal depression. Cree and its rivals are making “really, really good ﬁrst steps” toward this future, he says.

It’s all this unmet potential that leaves Swoboda far from satisﬁed. “I don’t think we’ve accomplished that much,” he says. “The world is still lit with incandescent bulbs.” Burying Edison will take a while.