The inbox had been left for dead. Now it's being resurrected by the two founders of Front, a startup with big-name backers and a mission to make old-fashioned email cutting-edge again 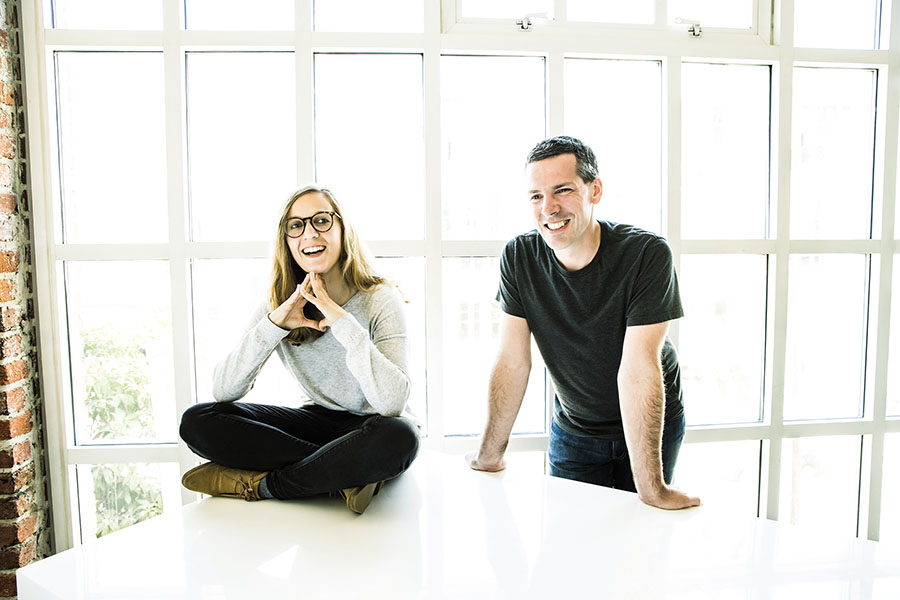 Co-founders Mathilde Collin (left) and Laurent Perrin facedpersonal hardships even as they reinvented corporate inboxes. He received, and beat, a cancer diagnosis; she suffered a breakdown caused in part by the ensuing stress
Image: Eric Millette
Mathilde Collin fidgeted with her backpack as she walked into a building overlooking the Tower of London, worried that she’d seem “too San Francisco” to the executives running a shipping broker that had recently celebrated its 134th birthday. Collin, the CEO of startup Front, was there to pitch software that turned a standard email inbox into a shared workspace—perfect for a logistics team responding to a stream of price quotes for cargo ships’ availability around the world. To her surprise, it was the broker, Simpson Spence Young, that promptly began pitching her. The company had surveyed its employees and discovered their communications tools, more suited to the telegraphs of an earlier century, needed an overhaul. They wanted Front’s help. Turns out a lot of older businesses that rely heavily on email are eager for Front’s help. “Having a new tool would change their life,” says Collin, 30. Better to fix what you have. Younger tech firms like Shopify and private payments leader Stripe have also signed on, paying between $9 and $79 per user each month (more money gets you more shared inboxes and features). Altogether, the seven-year-old firm has 5,500 customers, and revenue has quadrupled since 2017 to an estimated $32 million last year. It’s tiny, but its elite backers, including Sequoia Capital and founders of software leaders Atlassian, Qualtrics and Zoom—and even email killer Slack—are betting on Front. They have poured nearly $140 million into the San Francisco–based company, most recently boosting its valuation to more than $800 million in January, four times its figure just two years earlier. Unlike others who have been quick to declare the “death” of email—Slack rode a mission to replace it all the way to a stock debut last year—Collin and her co-founder, Laurent Perrin, 38, believe that the problem with the years-old protocol, dominated by Microsoft Outlook and Google’s Gmail, is in the packaging, not the product. The French co-founders met via eFounders, a startup studio in Paris, in 2013. Collin, who studied mathematics and entrepreneurship at HEC Paris business school, had quit her job over disillusionment with its culture. An engineer, Perrin was looking for a new gig after nearly four years as CTO of a French online radio service. After some brainstorming, the pair determined that a collaborative shared inbox—think any email you receive from a company whose address starts with “info” or “help”—would serve as their ticket into a company’s workflows. 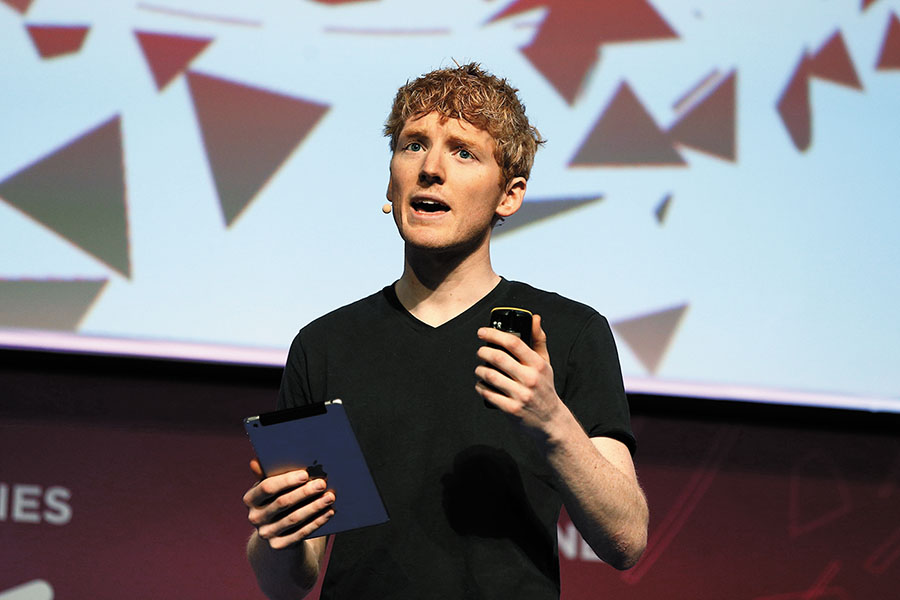 Patrick Collison, CEO of Stripe
Image: Getty Images
Before Front, one customer inquiry could set off a flurry of emails inside a business as colleagues copied each other and forwarded feedback in order to come up with one answer. With Front, users got access to a shared email that would treat incoming messages like living documents, appending notes, tagging colleagues and drafting responses without sending any emails. With about a dozen test companies onboard, the co-founders flew to California to interview for prestigious startup accelerator Y Combinator’s summer 2014 programme. Collin got to pitch partners, including the creators of Gmail and Yahoo Mail. Expecting profound feedback, she instead received a simple message: Follow your growth. “There was something about her, a competitiveness and assuredness, that spoke to us,” says Geoff Ralston, Yahoo Mail’s creator, who is now president of Y Combinator. “It was counterintuitive. Really, email? That’s the thing that’s going to create a new billiondollar company?” It’s well on its way, thanks to investors—but also loyal followers. At Edge Logistics in Chicago, president William Kerr says he needed a full-time employee to manage emails before he discovered Front. Now the company can automatically distribute inbound requests for quotes evenly across its reps, who compare notes and reach consensus on rates within the email before an assigned salesperson responds. “In my business, a lot of times you can win the job just by being the first guy to quote it,” Kerr says. “Over the course of 60,000 or 70,000 jobs a year, it makes a really big difference.” Collin and Perrin’s eventual goal is to undercut Gmail and Outlook while connecting more productivity apps to Front so its collaborative emails become an employee’s central hub. Analysts remain sceptical that it can challenge the duopoly.Both companies bundle their email products with suites of other tools—G Suite for Google, Office 365 for Microsoft. “Many startups have found opportunities under the noses of Microsoft and Google,” says Daniel Ives, a managing director at Wedbush Securities. “But I view email how most consumers view napkins at a restaurant: They’re not paying for it.” Patrick Collison, CEO of customer Stripe, says he recognises in Front a similarity to his payments business, now worth $35 billion: A willingness to tackle an industry others shunned. To Collison, the question isn’t whether Front can carve out a market, but how big it will be. “It’s as likely that Mathilde figures that out as any other early-stage CEO I’ve met,” he says. Collin is betting on herself. Recently, some of tech’s biggest CEOs have reached out, she says, including Microsoft’s Satya Nadella and Salesforce’s Marc Benioff. To Collin, their motives are clear. She says she has no interest in selling: “We are at .0001 percent of what we could do.”

Tweets by @forbes_india
Podcast: Investing in the time of Coronavirus
Tom Hanks and wife Rita Wilson test positive for Coronavirus