Thirteen years ago, no one wanted to buy a money-losing hearing-aid battery maker. No one but Michael Tojner. Against all odds, Austria's 'Mr 300 percent' turned that $40 million investment into a $1.9 billion fortune (thank you, Apple!). Now he has to fend off the copycats 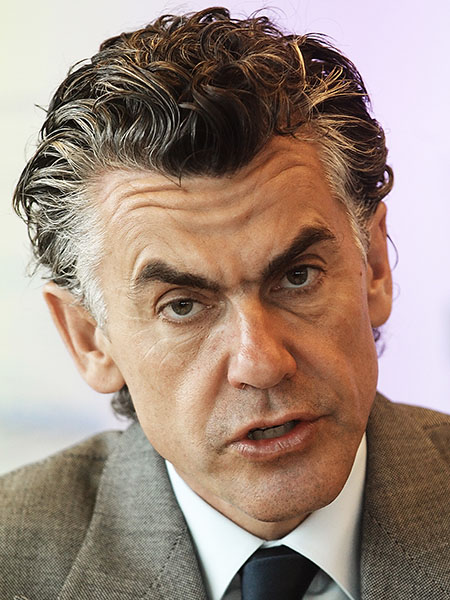 
In a grey-walled conference room on the outskirts of the medieval Bavarian city of Nördlingen, Austrian billionaire Michael Tojner is toying with a tiny battery. The coin-sized device is a technological wonder. Measuring just half an inch around, the gizmo packs a hundred times more energy than a household battery ten times its volume, can fully recharge in just 15 minutes and can last five hours on a single charge. A much earlier version powered Neil Armstrong’s camera during the Apollo 11 moon landing. Some of the modern ones famously power Apple’s popular AirPod Pro wireless headphones.

The batteries are also a financial wonder. Tojner bought Varta, the company that makes them, for just $40 million in 2007. Two and a half years ago, he floated the company on the Frankfurt Stock Exchange; it now has a market cap of $2.8 billion. Commerz­bank estimates that Varta has a more than 50 percent market share for premium wireless headphone batteries, which boast extraordinary 40 percent margins.

AirPod Pro sales along with deals with Samsung, Jabra and Sony drove Varta’s revenues up by 34 percent, to $400 million, in fiscal 2019. Tojner’s 56 percent stake plus his investment success—the Austrian press calls him “Mr 300 percent”—have landed the 54-year-old father of six on the Forbes Billionaires list for the first time.

“With microbatteries, we became the clear market leader in a segment which is growing at probably 50 percent to 60 percent per year,” Tojner says. “In ten years, no one will have a phone without an ear application. There is enormous potential for growth.”

Tojner’s Varta is the surviving shard of a giant German industrial concern, also called Varta, which was founded in 1887 and eventually sprawled into pharmaceuticals, chemicals, plastics and, yes, batteries. After the end of the first World War, the billionaire Quandt family—best known as BMW’s most powerful shareholders—acquired most of the company. Nearly a century later, with the pharma and chemical business long since spun off, Deutsche Bank and the Quandt heirs were selling off the pieces. Rayovac and Johnson Controls bought most of the battery business, but the tiny microbattery business was the last to be sold.

“I was the only bidder left for Varta because nobody dared to buy Varta,” Tojner says. “They sold me a company with negative cash flow. But everything was supposed to be better because we had an Apple contract. After one year, one small battery exploded. We lost the Apple contract. The company almost went bust. The bank was nervous, and I was in the restructuring department because we couldn’t pay our interest.”

Longtime Varta board member Sven Quandt says his family considered bidding, but it took Tojner to transform the company into a world leader. “These companies were in a big business group,” he says. “People were not so focussed on profits, on reliability, on how to grow the company. Michael is a driver.”

The high-tech realm of microbatteries and lucrative Silicon Valley contracts is an unlikely perch for a peripatetic entrepreneur who got his start selling ice cream to tourists. 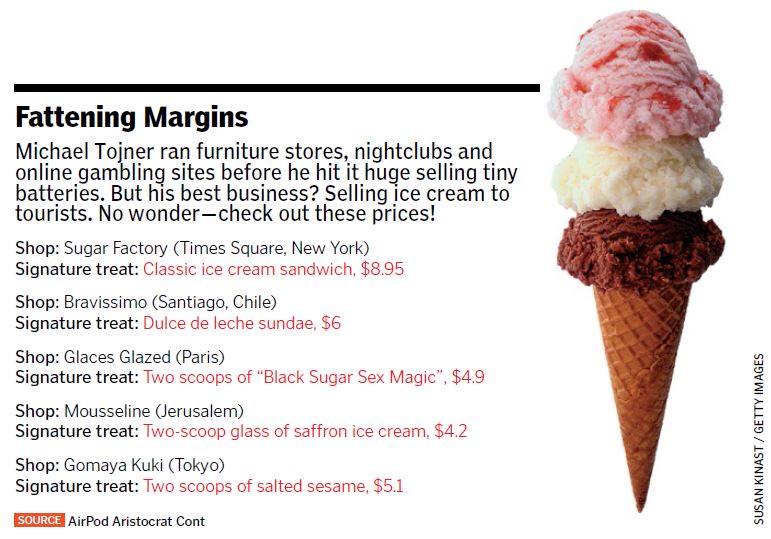 The 1,400-room Schönbrunn Palace was for 300 years the summer residence of Austria’s ruling Hapsburg family and is now one of the most famous landmarks on Vienna’s tourist trail. It was also the start of Tojner’s entrepreneurial career. In 1991, while studying law and business management at Vienna University of Economics, he secured the rights to run an ice cream stand inside the palace grounds.

Tojner used the profits from the ice cream stand to expand willy-nilly into a mail-order business selling kitchen mixers to post-communist Hungary, Vienna nightclubs and even a chain of furniture stores. “Ice cream has an even higher margin than microbatteries, so it laid the foundation of my entrepreneurial life,” Tojner says.

After earning PhDs in both law and business management, Tojner sold the enterprises and launched his own venture  capital fund in Vienna. He scored a big hit with Vienna-based online gambling portal Bwin, which he took public at a $242 million valuation in 2000.
“Michael is to money what Mozart is to music,” says Manfred Bodner, who launched several ventures with Tojner, including Bwin, and was best man at his wedding. “He loves it, and has a hell of a lot of fun making more of it.”

The university friends didn’t speak for four years after Tojner sold his Bwin stake and launched his own gambling venture, Starbet. “Michael is extremely competitive,” Bodner continues. “It is not easy to partner with him... many people got burnt along the way.”
Tojner has been accused of defrauding taxpayers of $43 million through deals to buy public housing on the cheap. He denies all wrongdoing, but the investigation has made him a fixture in the Austrian press.

The microbattery business also has some shadows hanging over it, with reports that Samsung and other Varta clients have begun using batteries from Chinese battery makers Eve Energy and MIC-Power, rattling analysts and investors. Varta is fighting back with legal action, filing a patent infringement suit in Texas in February.

“I think German companies are sometimes quick to underestimate the potential of their Asian competitors, and this unfortunately seems to be the case with Varta,” says Commerzbank analyst Stephan Klepp.

Warburg Research’s Robert-Jan van der Horst says Varta’s juicy margins will be squeezed by the competition, but its heavy investment in robots will keep “Made in Germany” batteries rolling off its Bavarian factory floors. Van der Horst points out that in their old-fashioned hearing-aid business, “they employ just 10 people who produce a total output of 1.4 billion batteries a year.” Varta’s microbattery business is similarly efficient.

Whatever the future holds, Tojner seems confident that his technology will keep Varta ahead of the pack. “Our quality is better, so that is why we can ask for a premium,” he says. “With Apple and Samsung, these [headphones] cost a lot of money. The battery, the most important component, costs maybe €5, but you will go crazy if it doesn’t work after eight months.”

Tweets by @forbesindia
Restarting India: Nagpur waits for the orange signal
'Not where I expected my senior year to be': in a hospital morgue