As Nagpur continues to be a red zone, industries struggle with labour, finances, supply and demand even after restrictions are partly lifted 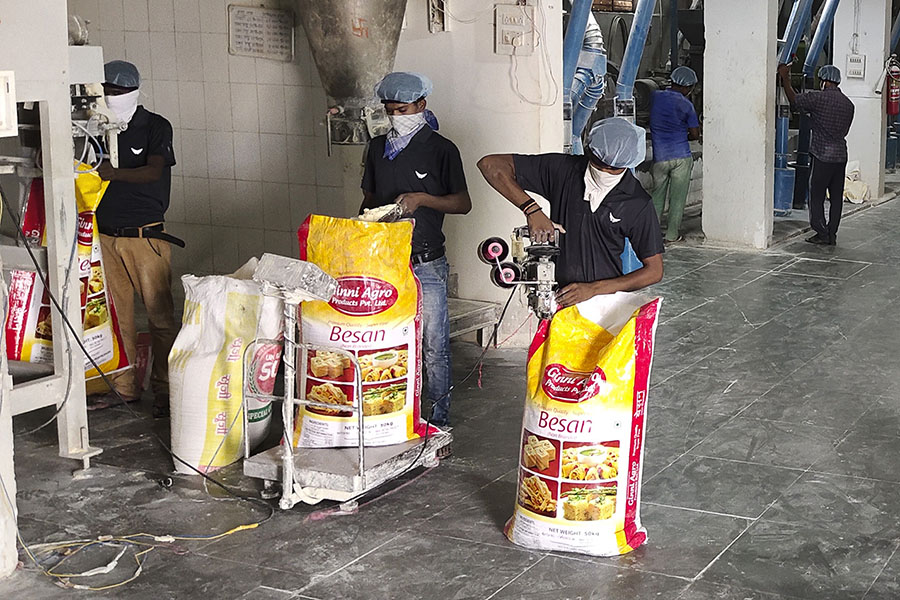 Gram flour is milled, weighed, packed and made ready for transportation at Nagpur’s Ginni Agro Products, which is working with half its workforce
Image: harshad Jog

Until two months ago, Nagpur Polyfilms used to make bottles for confectionary, country liquor, beverages, food items, cosmetics, ayurvedic and allopathic formulations, and local packaged water companies. Until the Covid-19 situation hit, they had no sanitiser manufacturers on their client list.

After the first phase of the national lockdown was announced on March 24, a lot of businesses (especially in the pharmaceutical sector) shifted to producing santisers, and thus came the demand for sanitiser bottles.

With about 300 Covid-19 cases in Nagpur as of May 13, and a majority of them restricted to just two areas—Mominpura and Satranjipura—people have been appreciative of Nagpur Municipal Corporation Commissioner Tukaram Mundhe and his strict measures in helping control the spread of the virus. But the city continues to remain a red zone, and though it is slowly limping towards normalcy after some restrictions were lifted on May 13, industrialists think it will be a while before operations get back to normal, and economic activity restarts.

“Mundhe has done a great job in containing the coronavirus but it’s high time industries start here, too, starting from liquor. Everything is linked to liquor,” says Aditya Mantri, managing director of Nagpur Polyfilms. Resuming the liquor business is connected to the revenue of every other business, besides increasing government revenue. As alcohol production resumes, the food and snacks industry will see an increase in demand, along with local beverages, he says. All of which will help Nagpur Polyfilms.

The Mantri family runs three businesses—Nagpur Polyfilms, Ginni Agro, a manufacturer of whole wheat flour and gram flour, and Polyfilms Industry that manufactures plastic bags. All three businesses are running, but at a capacity of 40 percent with a workforce of 50 percent. “Our plant is running only because of sanitiser bottle orders,” says Aditya.

With the onset of summer, several other industries too are feeling the heat, including the air conditioner and air cooler industry. Besides wholesale fruit and vegetable markets, Nagpur’s central location in the country means it has a host of warehouses on its outskirts. With lower consumption, inventory is held up at these warehouses, thus affecting businesses that also run the risk of goods with limited shelf life getting spoilt.

Of late, Nagpur has also become a hub for the IT and services sector, with companies such as TCS and Infosys setting up offices in the city. This is apart from various micro, small and medium enterprises (MSMEs), where employment is at stake. Small private enterprises such as chartered accountancy firms, architects and lawyers too are finding it difficult to continue paying their staff.

Hitesh Parse, an advocate specialising in taxation and finance, is also the promoter of Aquarii Infrastructures Pvt Ltd and has been vice president at BNI Edenite, Nagpur, a business networking organisation. He outlines the problems he has been facing in his business. Through the Vidarbha Irrigation Development Corporation’s scheme, Aquarii Infrastructures was to lay pipelines from a dam to 4,000 hectares of farms. They placed orders for pipes from Supreme Industries, located in Jalgaon. Now that the government has permitted Parse to start operations with a few labourers, and he has started receiving material from Supreme Industries too. However, unavailability of cement and sand, which Aquarii Infrastructures acquires locally, means work is at a standstill.

The Parse family was also in the midst of renovating their office when the lockdown was announced. Work stopped, and though the government has now allowed technical staff to resume work, the renovation work has still not started. Meanwhile, he continues paying rent for the office he is working out of.

Unavailability of labour has been a predicament across industries. At all three of the Mantri family businesses, Ramesh Mantri, Aditya’s uncle and promoter of the businesses, has arranged for labour accommodation and food. “Labourers want to leave but they can’t. While working, at least they can provide for their family, something they can’t in their villages,” he says. “A majority of the workers in industries across the city are from outside. Some industries have fired the workers, some are cutting salaries by half and some are paying in full.”

The Prime Minister had suggested that employers should not lay off employees or reduce their wages. While some industries do continue to support workers, they are now feeling the pinch. “At a time like this, it’s already difficult to recover old debts while cash flow is evaporating. Salaries run into lakhs, and even if you want to pay, it’s difficult,” says Ramesh.

Another reason experts say industries are making arrangements for workers is that they remain available once the lockdown ends. Not paying workers is also likely to cause a ripple effect in the post-Covid-19 world. According to Ramesh, labourers might not want to return to businesses that didn’t help them. Foregone skilled labour would become a new hurdle for industries, as they would have to train new labour.

Labour that is around wants to be paid more. “If we are being paid the same amount as a labourer who has left for home, that isn’t fair to us,” labourers told Aditya.

Apart from the increase in the cost of maintaining a workforce, other costs too have gone up. “Raw material costs have increased by over 10 percent, costs of packaging and transportation have gone up, we’ve spent ₹50,000 on sanitisers for our employees, and for the risk taken by us, we have increased our margins by about 15 percent,” says Aditya. Prices of finished goods in the market have subsequently increased.

Ramesh estimates it will be at least six months to a year before industries in Nagpur get back to an optimum level. “Everything is interdependent; opening one thing while the other is shut makes little sense,” he says. If production resumes and a machine breaks down, unavailability of spare parts hampers business. Similarly, if production is fulfilled but transportation is at a standstill, distribution poses a problem.

“We will have to live with the virus,” he says, adding that once demand increases, production won’t be an issue.

Tweets by @forbesindia
Embrace who you really are, Dear Introvert
The tiny battery powering Airpods built a $1.9 bn fortune