The Wizards from Oz 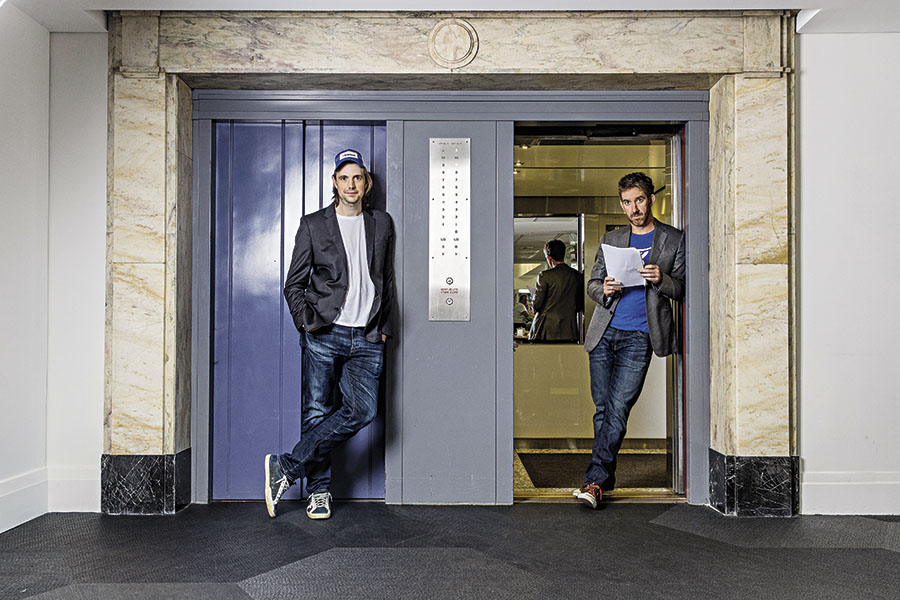 Mike Cannon-Brookes (left) and Scott Farquhar started Atlassian to avoid getting “real jobs” after college. Half of Australia’s computer science grads apply to their company
Image: James Horan for Forbes

Fresh off the red-eye from San Francisco, Mike Cannon-Brookes enters a rented office space in Midtown Manhattan to seal the biggest deal in his company’s history. Dressed in a Detroit Tigers T-shirt and blue baseball cap, he greets the room in an undulating Australian twang. Seated around a conference table are executives from his collaboration-software firm, Atlassian, which is in the final push to acquire Trello, a smaller competitor whose founder, Michael Pryor, is also present. For four hours, Cannon-Brookes relentlessly sells the importance of achieving scale and the benefits of uniting their rival firms.

Pryor is convinced. One month later, in January 2017, Atlassian will officially acquire Trello in a $425 million deal that will help send company shares up 47 percent in four months and add $820 million to the fortunes of Cannon-Brookes and his co-founder, Scott Farquhar. The 37-year-old Aussies, who dress more like off-duty surfers than top-flight executives, are worth $2.6 billion each.

That ascent has vastly outstripped the pair’s humble objective when starting Atlassian in 2002: Dodging a lifetime of corporate IT drudgery. “Our aspirations were literally just to not get a real job,” Farquhar admits, “and to not have to wear a suit.” Those aims thoroughly satisfied, they have managed to reach a few extra milestones as well: A blockbuster IPO in 2015, annual revenues approaching $600 million and status as one of the most successful technology startups in Australian history.

The founders, who serve as Atlassian’s co-chief executives, freely acknowledge the improbability of their meteoric rise. “I think we’re completely under-skilled and under-experienced for the job that we’re in,” Cannon-Brookes deadpans. But despite the self-effacement, they have unquestionably built a highly disciplined business with a continually expanding global footprint. What began as Jira, a bug-tracking tool for software developers, has since morphed into over a dozen collaboration products used by many of the world’s most prominent innovators, including NASA, Snapchat, Twilio and Spotify.

Atlassian has 85,000 customers who pay as little as a few dollars per person per month for access to its software. Confluence, its knowledge-sharing app for teams, is its most popular after Jira. Other products include Bitbucket, an online repository for storing code; Bamboo, a technical-workflow interface; and Hipchat, a messaging service that competes with Slack. Trello, the latest addition, is a project-management tool that helps Atlassian further appeal to individuals and smaller, less technical teams.

In essence, Atlassian has taken on the unsexy mission of bridging organisational and communication gaps. If the back-end seems dry, the applications are anything but. When developing the software underpinning Tesla’s electric car, Elon Musk turned to Atlassian. SpaceX is using its software to coordinate coding teams and rocket scientists, and NASA relied on it to help plan the Curiosity Rover’s mission to Mars. The customer list extends further: ­Airbnb, BMW, BlackRock, Sotheby’s, Paypal, all eight Ivy League universities and 85 percent of the 100 largest companies in America.

That success has come despite Farquhar and Cannon-Brookes’ insistence on skirting industry norms. Atlassian has no sales staff, unheard of in the hypercompetitive world of enterprise software. And in an era when some tech leaders helm more than one multibillion-dollar venture (Jack Dorsey, Elon Musk), the co-founders are the conspicuous duo leading a single entity.

Growth has come easily so far, but the pressure is on for Atlassian—which posted just a $4.4 million profit last year—to prove it deserves its $8 billion market cap. And as it ventures further from its technical core competency, competitors are anything but idle. Smaller startups like Slack and Asana are nibbling away at market share, while industry giants like Microsoft pose a persistent threat from above.

Farquhar and Cannon-Brookes, unified in their drive to fend off such dangers, began their lives on disparate trajectories. Cannon-Brookes, the son of an English investment banker, spent much of his youth jetting between Sydney and a ritzy British boarding school. He bought his first computer using airline miles and decided to pursue a career in technology on a whim after being accepted into a prestigious business and computer science scholarship programme at the University of New South Wales (UNSW).

Farquhar, meanwhile, was raised in a home with far more modest means. His mother worked at Target and later McDonald’s, his father at a service station, and he acquired his first computer after his dad’s business threw it away. He too landed at UNSW as part of the same scholarship cohort, one of a few dozen standout students offered an annual stipend of roughly $9,000.

Despite their differences, the pair developed a fast affinity. “He just seemed like a really good bloke,” Cannon-Brookes recounts with signature nonchalance. Nevertheless, they spent most of their college years working on separate projects: Cannon-Brookes on a couple of mildly successful startups, and Farquhar, like many of his classmates, as an unhappy intern at a technology consulting firm.

They finally teamed up during their last year as undergraduates after Cannon-Brookes sent an email to a handful of classmates seeking partners for a new startup. The company would provide third-party support for a Swedish software firm. Farquhar, eager to avoid another consulting stint, was the only person to sign on.

After graduating, they huddled in their respective bedrooms, working to cultivate clients under the banner Atlassian—named for the Greek titan Atlas, who holds up the heavens. But the third-party-support model proved difficult to scale, so they test-drove a number of other projects: A mail-archiving tool, a knowledge-management product and Jira, designed to help coders track bugs.

Jira was the first to gain traction, so they scrapped the other ideas and went all in. There was only one possible business model. “Our software didn’t do very much to start with, so we couldn’t sell it for much money,” Farquhar explains. “If you aren’t going to sell it for much money, you need to sell a lot of it. To sell a lot, it needs to be sold globally. And if you sell globally, it’s got to sell itself online.” So Atlassian put Jira on the Web and largely let customers find it on their own. Among their first clients was American Airlines, which bought a thousand dollars’ worth of software without ever speaking to the Atlassian team. “American Airlines was the first company that just sent us some money and said, ‘We want the software’,” Cannon-Brookes says. “That was a pretty big moment. Obviously, we’ve continued to see that model.”

That low-cost approach gave the company a positive cash flow from the get-go, allowing Cannon-Brookes and Farquhar to make outsize investments in research and development and to pay early hires in cash rather than forfeit equity.

Buoyed by organic growth, Atlassian took no outside capital until 2010, when Accel Partners invested $60 million at an estimated $400 million valuation. By the next funding round—a $150 million infusion led by T. Rowe Price in 2014—its valuation had soared to $3.3 billion, and its unassuming, shaggy-haired co-CEOs were billionaires. The following year, the company went public with a $4.4 billion market cap, and their fortunes swelled even more.

The founders downplay their riches, citing job creation as a more meaningful metric. But belying their low-maintenance public personas are some decidedly ten-figure trappings. Cannon-Brookes speculates in Bitcoin and invests in sci-fi passion projects. In March, he sought to alleviate South Australia’s power crisis with the help of Elon Musk, engaging in a round of high-profile Twitter diplomacy in a bid to import a 100 megawatt-hour Tesla battery farm (a plan that has so far gone nowhere). For his part, Far­quhar recently paid $52 million for a 154-year-old seven-bedroom New South Wales estate that features a harbourside tennis court, reportedly Australia’s priciest home purchase ever.

With a lifetime of cash already stockpiled, the two are focussed on making Atlassian an indispensable tool of enterprise that will catalyse many of the next generation’s most profound innovations. The Trello acquisition, then, is simply phase one of a master plan. “In ten years’ time we’ll still be young and doing the job at 47,” Cannon-Brookes says. “We think about the world in decades.”