Will Vera Bradley be able to shed its baggage?

Vera Bradley has been a major player in the women's handbag and accessories segment for nearly three decades, but the brand is struggling to expand its market. Can the queen of fresh prints get a handle on Millennials? 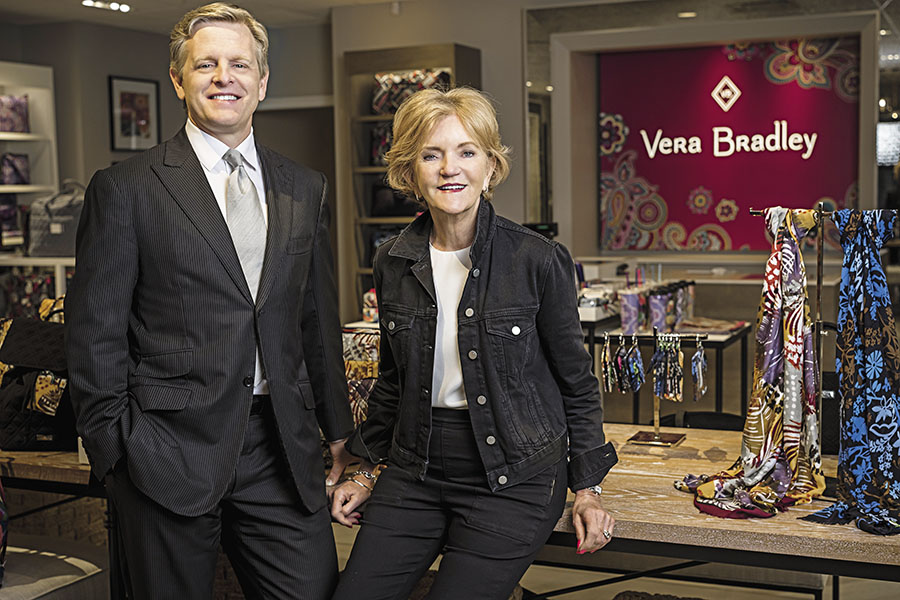 Carrying on: Vera Bradley CEO Robert Wallstrom with co-founder Barbara Bradley Baekgaard are out to bag former customers—and introduce the brand to a new generation
Image: Brian Kelly for Forbes

Barbara Bradley Baekgaard’s home in suburban Fort Wayne, Indiana, is a kaleidoscope of vibrant, colourful patterns, much like the signature quilted cotton bags and accessories produced by her company, Vera Bradley: The kitchen is wallpapered in a green-and-white gingham, the master bedroom in a pink floral, the dining room in a diamond pattern.

Just a few miles away is Baekgaard’s old residence, where she and her then-neighbour Patricia Miller launched the firm in 1982 on a basement Ping-Pong table. The pair took a $500 initial investment—each woman anted $250—and turned it into a lifestyle and accessories business with $500 million in 2015 sales. And while Vera Bradley’s growth earned Baekgaard, 77, and Miller, 78, spots on Forbes’s list of richest self-made women, with estimated personal net worths of $270 million and $300 million, respectively, their business has been dropping like a heavy suitcase of late. The stock is down 39 percent since the company went public in 2010, net income is down 60 percent ($27.6 million in 2015) since its 2012 peak, and sales are down 6 percent, to $503 million, as the company struggles to recover from an over ambitious post-IPO expansion.

Vera Bradley was born three decades ago during an airport layover. Baekgaard and Miller were travelling from Boca Raton, Florida, back to Fort Wayne, and both noticed how drab women’s luggage looked. The two went home and “literally started the company the next day,” Baekgaard says. Named for Baekgaard’s mother, Vera, who was a model for Elizabeth Arden in the 1930s, the company began when she and Miller started using colourful printed cotton to sew duffels based on the popular Pierre Deux bags of the 1970s. 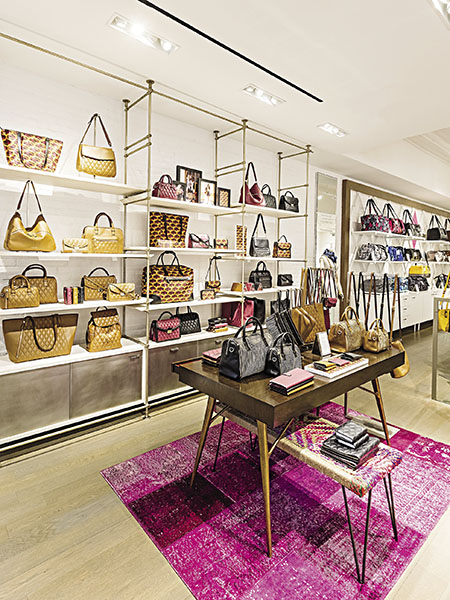 As demand for the bags grew, Baekgaard stopped doing the stitching on her own and, with Miller, hired a group of seamstresses and tailors. Baekgaard and Miller enlisted their friends and relatives—including Vera Bradley herself—to work as sales reps, getting products into specialty gift stores around the country. The duo expanded the line, adding totes, wallets and other travel accessories. Sales grew even more, and the brand became popular among teens and college-age women.

And then, after more than 25 years of success—with annual revenue of about $290 million and five-year annual growth of nearly 25 percent—they opened Pandora’s purse. Starting in 2007, Vera Bradley launched nearly 30 retail stores and was ready to become a true retail company, aiming to have 300 stores of its own. To raise money, the company went public in 2010, bringing in $176 million.

But the brand wasn’t ready for the growth a public offering required. At the time of the IPO, Vera Bradley had products in 3,300 independent retailers and had developed an aggressive strategy that called for opening 20 new retail shops every year to reach the projected 300 stores. Miller, who had been running the company as co-president, stepped down, while Baekgaard stayed on as chief creative officer, a position she still holds. Sales continued to grow, reaching a peak of $536 million in 2012.

At the same time, Vera Bradley was churning out new products, introducing roughly 16 quilted cotton prints each year (a dec­ade earlier it had released six), causing independent retailers to buy lots of new merchandise, even if they hadn’t sold their previous inventory. Excess product ended up on the company’s website at prices up to 70 percent off.

Compounding its problems, the company was still indulging custom requests from specialty stores, which unnecessarily increased the size of the product line. “If one of our stores came and said, ‘I really want another zipper on this bag,’ we’d make it for them,” says Julia Bentley, vice president of investor relations. The company has since slashed its product count from 3,000 to 2,000.

Over the years, Vera Bradley dominated the luxury cotton handbag market, but it eventually reached a ceiling. The company claims that cotton bags make up only 4 percent of the US handbag market and that it is responsible for 75 percent of those sales. “It’s very important for any company not to be a one-trick pony,” says Steven Marotta, an analyst at CL King & Associates. “Even if their trick is pretty good, eventually that will run out.”

Enter Robert Wallstrom, who took over as CEO in late 2013, coming from Saks Fifth Avenue, where he had helped reinvent the shoe department at its Manhattan flagship. “In our research,” the 50-year-old Wallstrom says, “what we heard a lot of people say is ‘I’ve purchased a lot, but I don’t know exactly when I’ll be back.’”

Wallstrom quickly announced his new plan. The first priority was to lure back former customers. He decided to introduce new fabrics, most notably leather. Next, he cut back the number of patterns the company released each year and ended its baby-gift line. He also eliminated aggressive online promotions; customers can now expect discounts of no more than 30 percent.

A remaining piece of Wallstrom’s strategy was a rebranding of Vera Bradley. In August the company rolled out new marketing aimed at Millennials, but it faced an immediate backlash against its “#itsgoodtobeagirl” campaign, which was perceived by some as patronising and old-fashioned. (The company says it adjusted the campaign.)

And Wall Street remains hesitant. Since January, Vera Bradley’s stock is down 3 percent. (By comparison, competitors’ stocks are up: Kate Spade has gained 1.5 percent, Coach 12 percent and Michael Kors 17 percent.) And sales for the first two quarters of 2016 are up just 1.2 percent compared with the same period last year.

Naturally the company remains hopeful that its new look and products will break through with Millennials. After all, the queen of prints needs just one more to work—the new blueprint.

(This story appears in the 25 November, 2016 issue of Forbes India. You can buy our tablet version from Magzter.com. To visit our Archives, click here.)