With NBA walkouts, a new bar for sports activism is set

No longer was sports offering gentrified protest, with league-endorsed slogans on basketball jerseys. Calm collapsed in the face of the inevitably growing power of players to make more than a statement. They took action 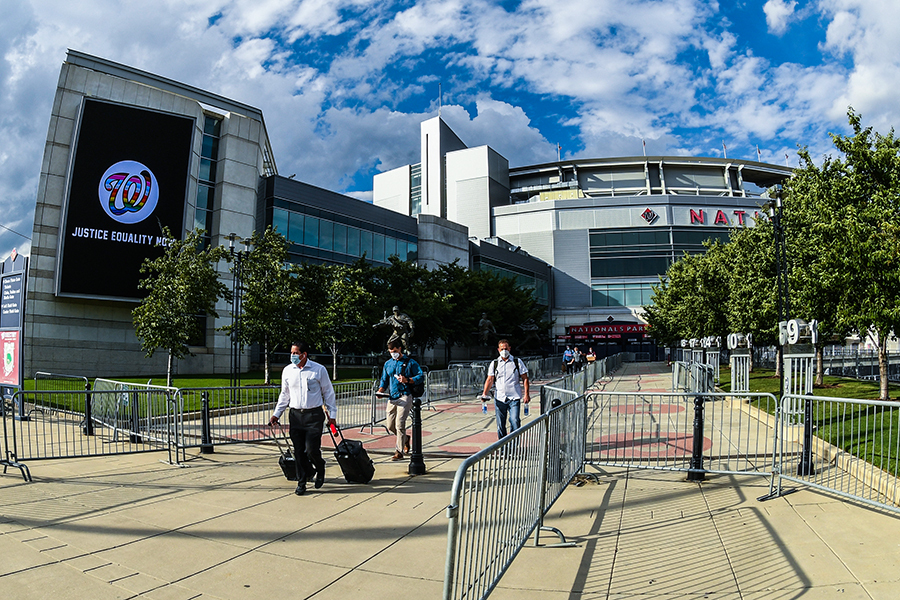 AUGUST 27: Philadelphia Phillies players leave the stadium after the cancellation of a baseball game against the Washington Nationals as players protest racial injustice on August 27, 2020 in Washington, DC.
Image: Mitchell Layton/Getty Images

Never before has the world of sports spoken so emphatically. The timing was unmistakably significant. The athlete walkouts were set starkly against a frightened Trumpian vision presented at the Republican National Convention. We watched this week as two Americas clashed in front of us, separated by generations and by oceans-apart views of race, justice and what it means to be a patriot. No longer was sports offering gentrified protest, with league-endorsed slogans on basketball jerseys. Calm collapsed in the face of the inevitably growing power of players to make more than a statement. They took action. It shattered the bubble of normalcy that had settled upon the NBA and its fans, who watched happily from home as a pandemic and protests raged. “We are scared as Black people in America,” LeBron James said, downcast as he spoke at a news conference inside the NBA’s so-called bubble at Walt Disney World near Orlando, Florida. “Because you don’t know, you have no idea, how that cop that day left the house,” he added. “You don’t know if he woke up on a good side of the bed, if he woke up on the wrong side of the bed. … Or maybe he just left the house saying, ‘Today is going to be the end for one of these Black people.’ That is what it feels like.” Jaylen Brown of the Boston Celtics spoke with equally raw emotion: “Are we not human beings? Is Jacob Blake not a human being? He deserved to be treated like a human being and did not deserve to be shot.” Sterling Brown, the Milwaukee forward who in 2018 was tackled by police officers and shocked with a Taser gun after a parking violation, read a statement for his team that concluded, “Despite the overwhelming plea for change there has been no action, so our focus today cannot be on basketball.” Jaylen Brown is 23. Sterling Brown is 25. LeBron James, one of the older players in the league, is only 35. All three, like so many of their NBA compatriots, are part of an emboldened generation of Black athletes, a vanguard challenging America’s norms in numbers never seen before. At the very same time, the Republican National Convention represented and embraced an entirely different vision — one nostalgic for the past, wary of change and angry for an entirely different reason. Sports personalities from an era when player protests were rarer figured prominently. Lou Holtz, the renowned 83-year-old college football coach who last led a team 16 years ago, proclaimed steadfast devotion to President Donald Trump and spoke triumphantly of a mythical America where anyone can succeed by just working hard enough. Herschel Walker and Jack Brewer, both Black former NFL players out of the league for well over a decade, struck the same tone, hailing Trump as a heaven-sent crusader against racism and a proponent of social justice, ignoring a reality that says the opposite. Two visions. Two Americas. 2020 versus years gone by. The NBA is hardly alone. Walkouts rippled this week through the WNBA and through predominantly white sports like professional tennis and soccer. Games were postponed because of protesting players in conservative, tradition-bound Major League Baseball. At first the National Hockey League continued with its playoff schedule, before bending to pressure and taking a pause. This was the logical next step in the fervent activism inspired this year by the killing of Floyd. As the nation grappled with 401 years of racial trauma, it searched for ways to break apart systemic injustice and violence against Black Americans. Players as prominent as Kyrie Irving of the Brooklyn Nets declared that holding a season now, resuming amid the pandemic, was a mistake and a distraction — and called for athletes to stay home and work within their communities for change. But the NBA and the WNBA got back to work. The players chose to use nationally televised games as a platform for their grievances. They draped their courts and jerseys with slogans and calls for change. They knelt during the national anthem. Yet those protests had lost their power. Slogans and refusing to stand for the anthem seemed less edgy when everyone — even corporate sponsors and team owners — glommed onto the movement like a fad. Indeed, violence against Black people escalated. And that brought on this week’s refusal by the NBA and others to play sports. It was a swift jolt to leagues, owners and networks that live off televised broadcast games. Sports have long been a platform capable of providing shocks to the status quo. More than 50 years ago, Tommie Smith and John Carlos raised their black-gloved fists at the 1968 Summer Olympics in Mexico City. Muhammad Ali refused to fight in the Vietnam War. Billie Jean King, WNBA star Maya Moore and a long line of female athletes fought for justice and equal pay. And, of course, four years ago this week, Colin Kaepernick was spotted for the first time in his protest of police brutality, refusing to stand during the national anthem. The current refusal to play, however, is not simply a shock. This is an earthquake. Walkouts like this have never happened before in pro sports. Although this appears to be a temporary work stoppage — NBA players have voted to return, probably this weekend, and other sports seemed to be following suit — a new high bar of protest has been established. Black athletes and their allies will not hesitate to effectively strike again. Next time, the stoppage may well last longer than a few days. Maybe players will sit out an entire season. Maybe they will be from the NFL. Maybe Black college football players and their teammates at schools like Alabama, Florida and Oklahoma will walk. Perhaps the other America will stiffen in tried-and-true backlash and persist in harking to days of old. But the silence will speak to us all.