Yunnan Baiyao: The picture of health 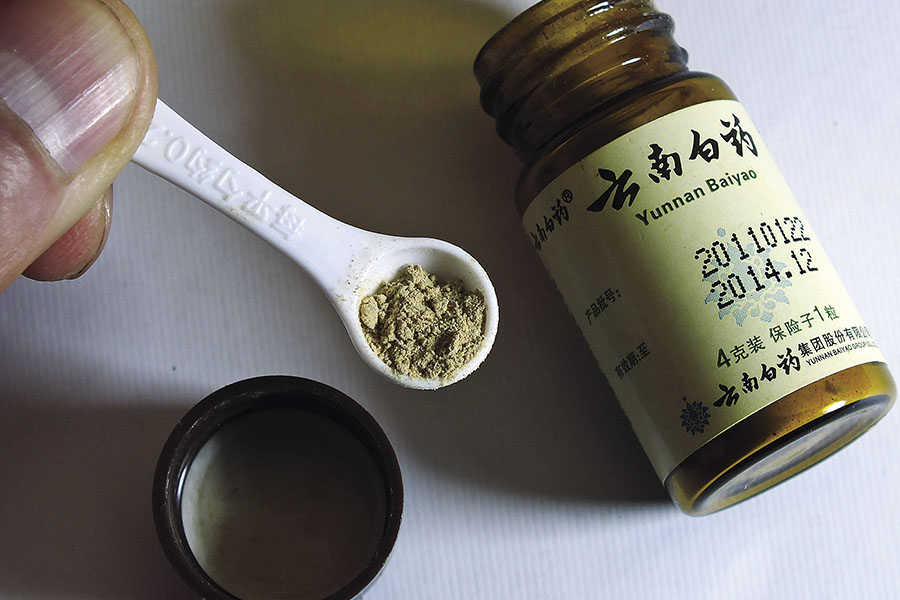 A spoonful of medicine that harks back to a more traditional time
Image: Imaginechina

The aerosol cans rolling along an assembly line at a Yunnan Baiyao factory in southwest China tell you everything you need to know about the health care company’s unusual prescription for success. The process of filling, testing and packing the cans is so automated that the few people involved do no more than haul the boxes off the end of the conveyer belt. Yet the stuff inside harks back to a time before factories even existed. The pain-relieving concoction is rooted in ancient Chinese medical practices. “Combine Chinese traditional medicine with the life of modern people and convenience of use,” says Yin Pinyao, Yunnan Baiyao’s austere, bespectacled president. “That is the way we innovate.”

That combination—the ultramodern with the extremely old-fashioned—has transformed Yunnan Baiyao Group into one of the unlikeliest rising stars of Chinese business. Over the last five years, its revenue doubled to $3.4 billion in 2016, while net profits did even better, increasing by 140 percent to $440 million. The market capitalisation of the Shenzhen-listed company has surged as well—by two and a half times since the end of 2011 to more than $13 billion. Such vitality has landed Yunnan Baiyao on Forbes Asia’s Fabulous 50 list of the region’s best public companies for the second time; it also made the list in 2015.

That performance is a miraculous recovery for what had been a very sick firm. The company was founded in 1971 in the city of Kunming by the Yunnan provincial government to mass-produce a powder used to treat wounds. (The name Yunnan Baiyao translates to “white powder from Yunnan”.) Invented by a Kunming doctor in 1902, the formula is a mixture of herbs that are all ingredients in Chinese traditional medicine and are kept secret by the company. The powder has been proven to help stop bleeding and prevent infection, and it was used effectively by Chinese troops during World War II.

By the 1990s, though, Yunnan Baiyao’s condition seemed terminal. Its white powder was falling out of favour as wealthier Chinese gained better access to modern treatments, and the company’s sales were in decline. Yet Yunnan Baiyao stubbornly kept churning out that powder—the main product it sold. In 1999, Yin and chairman Wang Minghui, then executives at another state-owned pharmaceutical firm, were tasked by their government bosses to cure the ailing company. “We found that baiyao products had great potential,” says Yin. “The issue was how to combine the traditional medicine with modern life to meet the needs of the market.”

Wang and Yin administered a dose of intensive therapy. They upgraded the research and development team to craft new products and the marketing department to sell them. The strategy, which they called “new baiyao”, was straightforward: Utilise the still well-known powder in all sorts of new ways to appeal to today’s Chinese consumer. Out poured an entire range of baiyao-infused items: Toothpaste, bandages, haemorrhoid cream and those pain-relieving aerosol sprays bouncing down the Kunming assembly line, to name just a few. Then, starting around 2005, Yunnan Baiyao expanded even further, into products based on other forms of Chinese traditional medicine. Herbs are mixed into shampoos to soothe itchy scalps and into soaps to supposedly slow ageing. 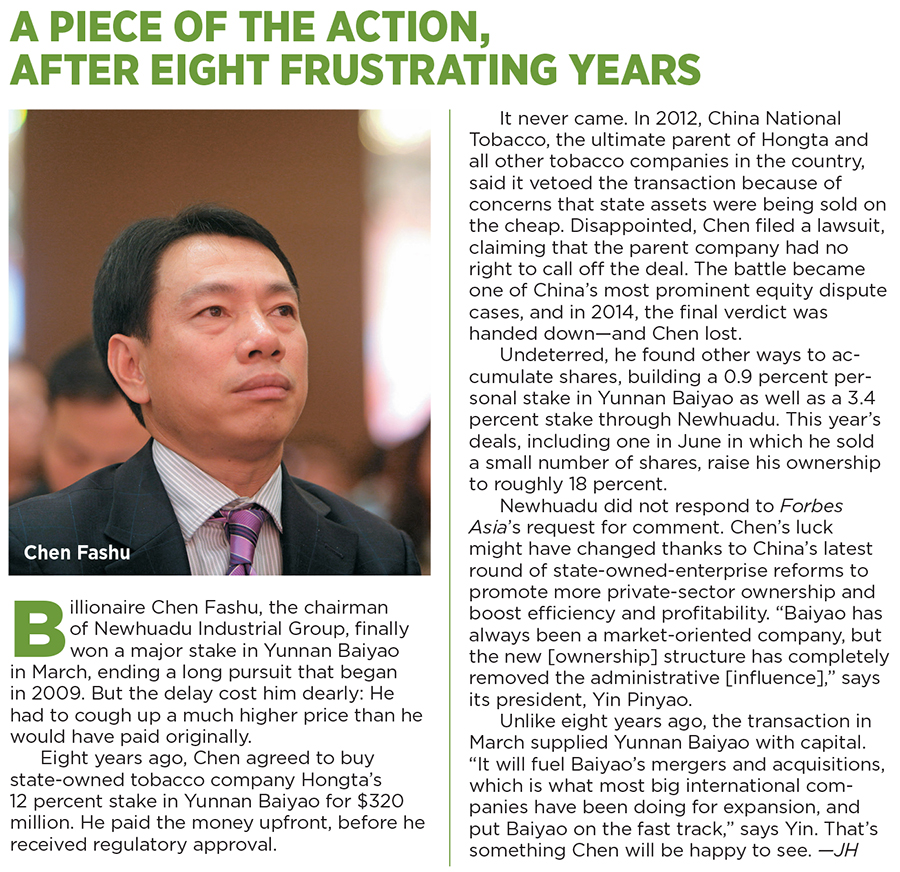 Yunnan Baiyao plugs these medicinal qualities to make the case that its products are superior to their run-of-the-mill competitors. Adhesive bandages injected with the magical white powder are marketed under the motto “It heals faster with baiyao.” One advertisement for baiyao toothpaste shows an elderly gentleman pointing to the brand and reminding shoppers, “It took care of me when I was a soldier at war,” while a younger woman lifts the tube and says, “Now it takes care of our whole family.”

The message caught changing Chinese consumers at just the right moment. As households have become wealthier, they’ve also become more health-conscious—and more willing to spend on their well-being. “People here pay more attention to the prevention of disease rather than just curing it,” says Yin. “This is the strength of traditional Chinese medicine. Compared with modern medicine, that is our uniqueness.”

That’s also boosted the company’s profitability in a cut-throat industry. By marketing its products as “medicated”, Yunnan Baiyao has been able to charge a premium. A tube of baiyao toothpaste, for instance, retails for roughly twice as much as a similar-size tube of Colgate, and some consumers are willing to pay up. Tu Xiaoling, an administrator at a Shanghai university, began buying Yunnan Baiyao’s pricey toothpaste two years ago, hoping it would help ease her bleeding gums. “Traditional Chinese medicine cures the problems from the roots,” she says.

In fact, some of these products have gained significant market share. Its toothpaste grabbed 16.5 percent of the Chinese market in 2016, ranking it the second most popular in the country. Baiyao adhesive bandages lead that segment of the local market. According to market research firm Euromonitor, Yunnan Baiyao has been steadily gaining share in several product categories in China in recent years, including beauty and personal-care products and over-the-counter medications.

The Chinese government is encouraging even bigger sales. In recent years, Beijing has been promoting Chinese medicine as part of a revival of China’s ancient heritage, from Confucian moral teachings to traditional arts, in a quest to foster national pride, project cultural influence and, of course, create new jobs and exports. The State Council, China’s top governing body, recently went so far as to call on modern doctors to study the wonders of Chinese medicine.

The state is also backing its pronouncements with hard cash. Farmers who grow the herbs and plants used in traditional treatments receive tax breaks, helping to reduce the cost of making Chinese medicine products. In July, a new law came into effect that calls for enhanced training for Chinese medicine practitioners and promises even more generous state assistance.

All these trends point to a potentially larger market for Yunnan Baiyao. Wang Yinghu, senior researcher at consulting firm Forward Industries Institute in Shenzhen, forecasts that the sales of Chinese traditional medicine will more than double by 2022 to $270 billion, or about 35 percent of the total health care market.

Yin intends to capture that growth by rolling out a steady stream of new products. In 2014, Yunnan Baiyao purchased a 40 percent stake in Qingyitang, a Chinese manufacturer of female sanitary products, into which Yin aims to instil traditional medicine. Other new items include a children’s probiotic toothpaste and an all-natural face mask that the company boasts is edible (a claim we did not test).

Meanwhile, Yunnan Baiyao is in the midst of its own makeover. In recent months, the government has sold part of its stake. In March, the provincial commission that was the biggest shareholder sold half of its stake in Yunnan Baiyao’s holding company for $3.8 billion to the Fuzhou-based conglomerate Newhuadu Industrial Group, which specialises in supermarkets and shopping malls. Then in June, Newhuadu and the provincial government sold a combined 10 percent stake to medical-equipment maker Yuyue Technology Development, headquartered in Zhenjiang, for $835 million. The two deals leave government-controlled entities owning less than a third of Yunnan Baiyao. The privatisation “will help improve the company’s management, boost its performance in the capital market and gain the company a more competitive edge”, says Wang of Forward Industries.

Yin may need all the help he can get. As China’s population ages and the market for health care swells, every company making drugs or personal-care products is looking to the country as a source of growth. But Yin believes that Chinese tradition will continue to be Yunnan Baiyao’s advantage. “We have a lot of expertise in this field,” he says. “We can continue to create products that are interesting and new.”