How can people get around their default "Add something!" mode and consider subtraction more — or, rather, neglect subtraction less? Here's what managers can do to help their teams see more possibilities. 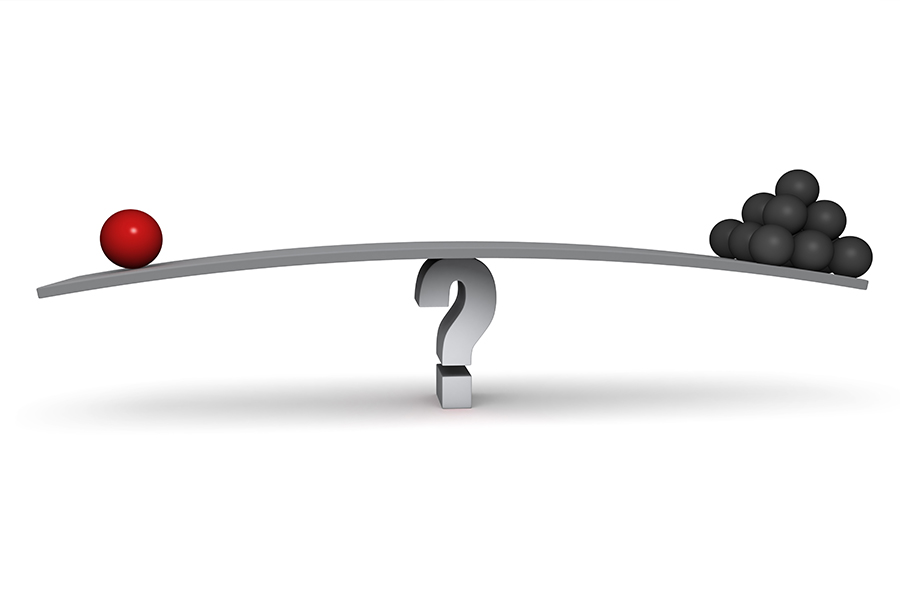 When people automatically default to adding, they may be selecting suboptimal solutions without considering superior ones.
Image: Shutterstock

Can people make things better by subtracting from what exists?

As examined in research by Darden Professor Gabrielle Adams, when people are trying to solve a problem, they focus on what they might add and rarely consider what they might take away. Yet subtracting is powerful! It can be the antidote to the problem of “too much” that many people struggle with: info-overloaded minds, packed schedules and cluttered homes.

“People systematically overlook opportunities to change the world through subtraction,” Adams says of the research on subtraction neglect, published in the scientific journal Nature. When people automatically default to adding, they may be selecting suboptimal solutions without considering superior ones.

Adams, who holds a joint appointment at the University of Virginia’s Darden and Batten Schools, conducted a series of experiments with UVA colleagues Benjamin Converse and Leidy Klotz and University of Mississippi Professor Andrew Hales. The researchers found across a variety of studies participants indeed failed to identify simpler, “subtractive” solutions. In a Lego building challenge, people were asked to stabilize an unsteady platform, and 59 percent of them “purchased” and added additional bricks, rather than taking away a single brick which would have also stabilized it — the “free” solution in the experiment.

Adams notes that the subtractive solution (taking away a single brick) was both more efficient and profitable, but participants only noticed it when they didn’t “jump to an additive strategy.” When the experiment included a reminder (“Removing pieces is free and costs nothing”), then only 39 percent of people chose to add Lego bricks.

The research team investigated subtraction neglect in other experiments: with essays, recipes, travel itineraries and miniature golf. “In almost every instance,” Adams notes, “People were more likely to add.”

The only exceptions were when the additions were patently strange — grilled cheese with a slice of chocolate, for example. Most people concluded that removing it was the best choice.

Subtraction success and the competitive value of ‘less’

In a world in which products are often marketed by touting the benefits of adding — “30 percent more” or “New feature!” — subtraction may be an underexploited competitive advantage. In the past decade, the food and beverage industry has used subtraction successfully: Smaller serving sizes such as 100-calorie snack bags or 7.5-ounce mini sodas subtract product and meet a need for fewer calories.

Google (minimalist interface) and Apple (minimalist design) have made fortunes based on subtracting extraneous features. Marie Kondo’s The Life-Changing Magic of Tidying Up spawned an industry of strategic subtraction. Inventor Ryan McFarland’s Strider balance bicycle is a prototypical example of “addition by subtraction”: By removing the peddles, McFarland created a new, better way for kids to learn how to ride a bike. Urban planners have also managed to improve safety by removing crosswalks and streetlights.

It may become increasingly important to bring subtraction into the conversation. Adams and her co-authors observe that the “add something” default “may be one reason that people struggle to mitigate overburdened schedules, institutional red tape and damaging effects on the planet.”

So how can people get around their default “Add something!” mode and consider subtraction more — or, rather, neglect subtraction less? Here’s what managers can do to help their teams see more possibilities.

1. Try regular reminders and questions. What’s extraneous? Can two things be combined? What would it cost us to subtract? How can this interface/process/product/service be made simpler?

2. Reduce distractions. When we are under stress or juggling many things, we’re more likely to default to familiar cognitive habits. In this case, default thinking is to add things and to ignore subtraction. Ironically, this can add more to our overfull plates, rather than finding ways to simplify.

3. Celebrate the creative thinking behind “less.” Tout simplification in design thinking. Make sure the organization can effectively market innovations that reduce energy consumption, waste, calories and confusion — both to decision-makers in the organization and to the public.

Gabrielle Adams authored “People Systematically Overlook Subtractive Changes,” which appeared in Nature, with Benjamin A. Converse of both UVA’s Frank Batten School of Leadership & Public Policy and College and Graduate School of Arts & Sciences; Andrew H. Hales of the University of Mississippi Department of Psychology; and Leidy E. Klotz of UVA’s School of Engineering and Applied Science and School of Architecture.