Corporations are partly responsible for and have suffered the effects of the triad of crises — social, environmental and economic ­— that have hit the world since 2008. An ‘ideal’ corporation today would be one that takes care of society, employs a lot of people and is environmentally conscious 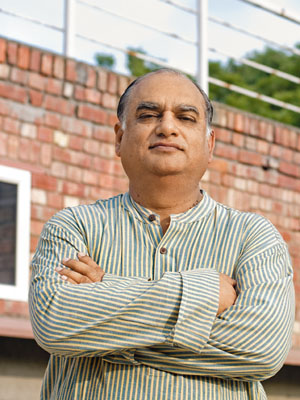 Vijay Mahajan 56, is one of the pioneers of microfinance in India. He is the founder of microfinance firm BASIX and the president of Microfinance Institutions Network. An electrical engineer from IIT-Delhi, he also holds an MBA from IIM-A and a post-graduate degree in public policy from Princeton University.

Alas, the 21st century does not represent “the end of history” that Fukuyama had so temptingly promised us, an era of linear progression on all desirable parameters, without any contradictions. Instead, we are faced with a triad of crises — on the social, environmental and the economic fronts.

On the social front, we see the spread of intolerance and fundamentalism among many, and anomie and callousness among the others, bringing to mind Yeats’ line, “The best lack all conviction, while the worst are full of passionate intensity...” On the environmental front (always there but rediscovered by Man), erratic weather, super-cyclones and persistent droughts bring home the spectre of climate change. An occasional act of nature, like the recent earthquake in Japan and the tsunami and the nuclear explosions in its aftermath, unnerve us even more deeply, as if signalling that Mother Earth has had enough of the Homo Sapiens. And when the US economy went into a downturn following the breakdown of the financial system in 2008, the global breakdown on the economic front became the peak of the triad of crises.

The consequences of this triad of crises are profound for humanity, and for our major institutions — governments, corporations, universities, civil society and the media. In this article, I dwell only on corporations. Apart from the fact that a downturn in the economy, any environmental degradation or social unrest lead to a decline in sales and profits for corporations, there is a bigger reason for concern. The modern corporation has become a pervasive force in all matters — going beyond its traditional realm of providing market goods and services to increasingly providing public goods and services like housing and utility services, and even health, education and social services. Corporations are also seen as unduly influencing government, in autocratic as well as democratic regimes. Finally, through their ownership of the media, corporations are seen as controlling information, influencing discourse and even impacting culture-in-the-making. Yet, for their legitimacy, for their markets and, most importantly, for their human resources, corporations have to depend on society.

What can be done to reconfigure the “ideal” corporation for the 21st century? Given that corporations (which are basically structures for profit maximisation) are deeply involved in the causes and the consequences of the triad of crises — environmental and social, they have to first change their ways. Interestingly, in the environmental field, there has been more progress in this regard. We have come a long way from the time when the world suffered silently through decades of industrial pollution, sometimes so severe as to cause acid rain, and later a big hole in the ozone layer.

Starting with a reluctant recognition of the negative externalities caused by certain firms, economists slowly began to accept that this could be corrected through the “polluter pay” principle. Eventually, widespread manifestations of global warming and consequent climate change led to crafting of the Kyoto Protocol under which developed economies agreed to impose limits on their emissions, by imposing penalties on pollution emitters within their sovereign jurisdictions.

To escape penalty, the polluter corporations had to either cut down emissions, or if that was not feasible or economic, buy a certain amount of “carbon credits”, net of which, their overall emission would be below the penalty limit. These carbon credits were made available by other corporations who had undertaken emission reductions, which are certified by a designated national authority. These certified emission reductions (CERs) are traded on an exchange, so that the demand and supply is matched by the price mechanism. This “cap and trade” system, though not perfect, is a huge innovation by humanity to correct some of its bad old ways.

The biggest criticism of corporations has been that with a few exceptions, they cause “jobless growth”. What is thus needed is to come up with a mechanism for “employment credits”. For example, a company which is maximising profits by employing little labour and much more capital equipment, below the optimum capital-labour ratio of its host economy, should be required to either pay a penalty for having a higher than specified capital labour ratio, or failing that, buy “employment credits” from another company which is managing with a lower capital/labour ratio. A serious try of this system can significantly address the problem of “jobless growth”, even though sceptics will have arguments on how an appropriate level of
capital-labour ratio cannot be specified.

Another mechanism can be “social credits”. The Government of India has proposed that all companies spend two percent of their profits on corporate social responsibility (CSR) activities. Those companies which are not spending at the specified level on CSR, should be made to contribute the deficit to a “consolidated CSR fund” which can then be managed by industry associations like the FICCI and CII.

The most difficult to implement would be what one can call “transparency credits”, to discourage corporations  from behaving in a perverse manner in the quest of competitive advantage. Since it is more objective to catch wrongful behaviour, it is better to impose stiff penalties on corporations violating regulations and laws. Part of these penalties (say 10 percent) should be passed on to a Supreme Court selected panel of watchdog groups specialising in exposing questionable practices of corporations and governments.

But nothing can change the perverse behaviour of corporations in pursuit of competitive advantage, as long as their shareholders continue to be the most fickle of all stakeholders. Unlike all other stakeholders — workers, managers, suppliers, creditors and even the surrounding community, the shareholders of a corporation are able to dump their stakeholdership, at the earliest sign of trouble. Though other shareholders replace them, and thus at any time shareholders do have a stake, the persons have changed and thus this stakeholdership is not comparable to that of the others who have to stick on through ups and downs. What can be done to curb this? One option is to discourage this kind of share trading by imposing a higher, say 35 percent, tax on gain from shares held for 90 days or less (very short-term gains tax). This amounts to a “long-term holding credit”. Once again, sceptics may say this reduces the price discovery function of speculation, but that can be protected with careful design.

Will this curb the egregious practices of corporation? I believe yes. Corporations are an embodiment of only one set of human motivations — those of the self-interest maximising “homo economicus”.

As our understanding of human behaviour becomes deeper than treating humans merely as producers and consumers, and once we realise that human beings draw existential meaning from other human beings, and from nature, we will recognise the full meaning of “vasudhaiva kutumbakam” (all of creation is one family). As Douglass North, the Nobel Prize winning institutional economist has said, social change occurs through change in relative prices. Though this looks like an incredibly technical explanation of a major phenomenon, it holds. See, for example, how society’s views on renewable energy versus fossil fuels have changed. The imposition of various “credits” and penalties suggested above will change relative prices forever and a new form of responsible corporate behaviour will emerge. That is when we will see values replacing valuations.

Tweets by @forbes_india
T.N. Ninan: India's Newspaper Business is Not Disappearing Just Yet
Co-Creating Your Brand With Young World Consumer-Entrepreneurs