T.N. Ninan: India's Newspaper Business is Not Disappearing Just Yet 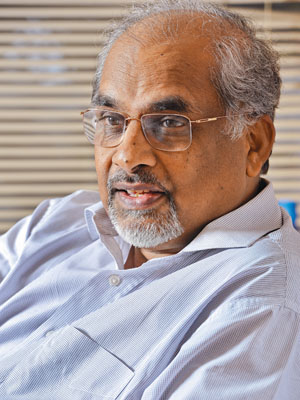 T.N. Ninan
An Award-winning journalist and one of India’s most respected economic editors, T.N. Ninan is editorial director of Business Standard newspaper. He was editor of the newspaper between 1992 and 2009. Before that, Ninan was the editor of The Economic Times and was responsible for establishing it as a leading financial daily. He has also been the editor of Business World magazine and executive editor of India Today

Did you know that the total share of the English news media in television is 0.7 percent of all TV viewing in the country? Yes, that’s much less than 1 percent. News channels, across all languages, have only a 7.7 percent share. That includes business news, plus all the time that you spend watching the tribunes of the people: Arnab Goswami, Barkha Dutt, Rajdeep Sardesai, Rajat Sharma and whoever are the heroes of Tamil, Bengali and Marathi TV news.

What about the cricket World Cup finals in Mumbai a couple of months ago, with the home team playing and winning? The total TV audience size has been estimated at 67 million — interestingly, that’s barely 10 percent of the total reach of television (about 630 million).

If you take the total TV universe, therefore, it is much bigger than the universe of newspapers, which are read by 325 million people every day. Also, people spend only a quarter of the time on newspapers that they spend in front of a TV set. Multiply readers by time spent, and newspapers account for only about 12 percent of the total time spent on the two media.

But TV news accounts for only 7 percent of all TV. So, believe it or not, the newspapers still occupy a bigger mindspace than news TV does. Even more important, established newspapers are much sounder businesses, being more profitable than even the leading TV news channels, which are being killed by excessive competition. Does anyone believe that there is room in the market to sustain 120 news channels?

Welcome to the capital of the world’s free (and growing) press. Newspapers sell twice as many copies in India as they do in the United States, and much more than they do in Japan. Unlike those markets, the newspaper business in India is also growing — more titles, more copies sold, more journalists hired.

What about the challenge from the Internet? Well, guess what... the total number of Internet users in India is about 90 million. And of that, only half have broadband connections. In any case, when they surf the Net for news, where do they go? To the newspaper websites, of course! Yes, there are aggregators like Rediff and Sify, which offer content syndicated from the main content producers. You also have mail sites like Yahoo that offer news as a part of their package. But if you’re into news, you want to go to the sites managed by the experts in the news business — which means newspapers and TV companies.

Why, even if you want to go into classified advertising, the leading real estate site in the country is magicbricks.com (run by — who else — the Times group, of course).

In short, don’t assume that just because newspapers are dying in the US and Europe, the same thing will happen here — or will happen five years down the road, when Internet usage grows. The truth is that newspapers in the US were asking for trouble for a long time, and they got it. The Los Angeles Times used to have 1,200 editorial staff, The New York Times about as many, and The Washington Post 900. Between the three of them, in their heyday, they had some 3,300 journalists, and sold a combined total of about 2.7 million copies. In comparison, The Times of India has 1,000 journalists on its payroll, and sells 4 million copies.

There was also the ridiculous pricing of newspapers. The New York Times, for instance, raised its cover price three times between 2007 and 2009, doubling in the process to $2 (about Rs. 90). For one day’s NYT, you can get nearly a whole month’s supply of the ToI. The amazing thing of course is that the paper that charges Rs. 90 for a copy loses money, while the one that charges Rs. 3.50 makes money. The revenue structure is comparable — 70 to 90 percent of a newspaper’s revenue, whether in the US or in India, comes from advertising. And the US spends a far higher proportion of its GDP on advertising than India does. Yet, most American papers have been losing money.

That gives some idea of the bloated costs of American newspapers — not just the number of journalists, but also the other costs, including those flowing from poor productivity. In War at the Wall Street Journal, an account of how Rupert Murdoch bought The Journal from the Bancroft family, Sarah Ellison has a brief vignette about the journalist who wrote one story a year — and he wasn’t considered unproductive.

The riposte will be the predictable one: American newspapers are so much better than Indian ones, so how can you compare their costs and prices? Conceding the point from a professional perspective, it bears keeping in mind that the issue is the reader’s perception of value — and there is nothing to suggest that readers of the leading Indian papers don’t like what they buy. Equally relevant is buying power. The NYT reader, if he were to buy the paper through the year, would end up spending about 1.5 percent of the typical US household’s income on one newspaper, whereas that would not be true in the case of the ToI or any Indian newspaper. Yes, newspapers in the US and elsewhere offer cheaper annual subscriptions, but they can’t beat what you can get here sometimes — a full year’s subscription for Rs. 99 (little more than the price of a single copy of NYT).

The simple truth is that Indian newspapers are far more affordable than their counterparts in the leading western economies. So when the times are tough, cutting the newspaper out of your monthly budget has been an easier decision to take in the US, especially since alternative news channels are more developed there, whereas in India the trend has been for households to buy more than one newspaper; in other words, buy more and not less. It helps, of course, that incomes are rising in India, and that advertising too is growing, whereas the typical US household has not seen its real income rise since the days of Ronald Reagan, perhaps, and the ad pie has been shrinking by 12-15 percent a year.

Most Indian newspapers are also different from those in the US and elsewhere, in that they have consciously tried to reach out to younger readers, with new sections and a re-orientation of coverage. They are engaging with communities, offering local connect and being pro-active about new ways of engaging advertisers. Some have succeeded more than others, and their extension to Web sites is still a patchy story. But the overall story is different from the picture in the West, where the young simply don’t turn to newspapers at all.

What happens five or 10 years down the road, when true broadband becomes available all over the country, when news access on mobile phones grows by leaps and bounds? Won’t Indian newspapers be challenged then? They might well be. I would argue that there are too many newspapers in India, and some deserve to shut down. You don’t need a choice of eight or 10 papers in one city, it just makes the marketplace crowded. If there is a shake-out and market consolidation, the ones that are left standing will be healthier.

Above all, literacy in India is even now only 74 per cent — and growing at about 1 percentage point in a year. The population of university graduates is growing even faster. Today, half the literate population probably does not have the money to buy a newspaper. As literacy grows, incomes rise and more graduates come on the scene, Indian newspapers will enjoy a naturally growing catchment.

As for the Web, the truth is that news brands on the Web get established much more easily if you are an established brand in the print or TV space. You can develop your presence in the new medium on a marginal cost basis, and load all costs once your Web site has gained enough traction.

News content companies will then deliver the news through multiple media, and finance everything that they do with advertising on those different media. Newspaper companies will morph into multimedia operations, and most have already started going down this road. So why would one be pessimistic about the future of these businesses? As Mark Twain might have said, reports on the eventual death of Indian newspapers are vastly exaggerated.

Tweets by @forbes_india
Direct to My Pocket: The DTH Tug of War
Vijay Mahajan: Values vs.Valuations