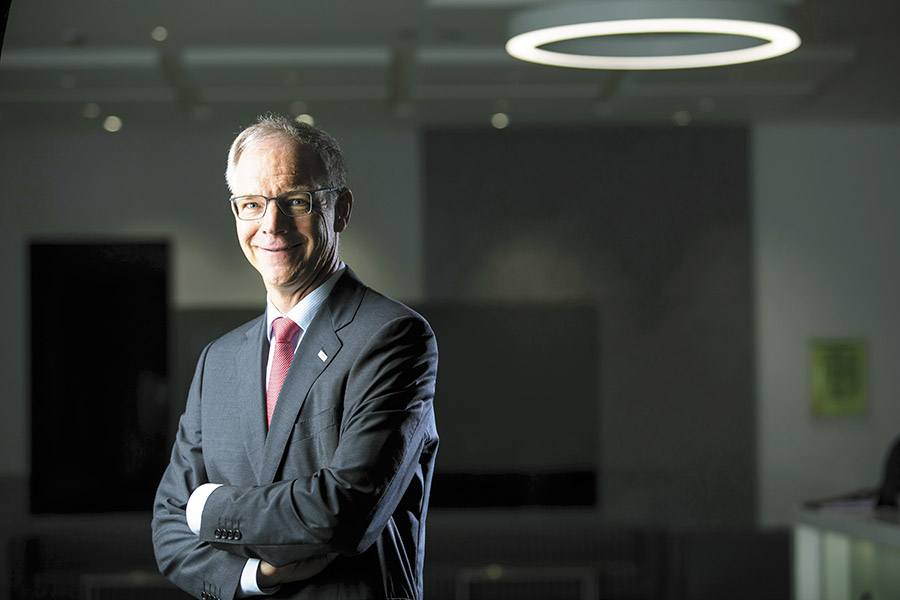 A Bosch veteran of 26 years, Dr Steffen Berns is now the global head of the company’s car multimedia business, headquartered out of Germany. He assumes the new role after having served as president, Bosch Group India, and managing director of Bosch Limited since 2013. Prior to this, Berns, 53, had worked in India between 1996 and 1999. During this period, he had helped set up the company’s Indian engineering arm, Robert Bosch Engineering and Business Solutions. Soumitra Bhattacharya is the new president of Bosch Group India and managing director of Bosch Limited. In one of his last media interviews in India, Berns talks to Forbes India about his journey, his two stints in India, the achievements of Bosch Group India and the road ahead for the company. Edited excerpts:

Q. How has the journey been since you joined Bosch in 1990?
My seniors always had faith and trust in me that I could do my job. They gave me a lot of freedom and responsibilities relatively fast. After six years, I was transferred to India for the first time and made in charge of the fuel injection pump development, which was the main product there. At the time, the responsibility for the development of inline pumps and later the distributor pump centre of competence was transferred from Germany to India. While Germany went strongly into electronic products, the mechanically controlled products continued to be produced in India, and they continue to do so.

Q. In 1996, when you were transferred to India, was there any aspect of the domestic business that needed to be changed?
There is always potential for improvement. 1996 was five years post the country’s economic liberalisation, so it was a phase that saw new companies enter the market. The supplier structure [in the automotive space] was much smaller and the [range of] product offerings from different suppliers was also much smaller. Many [automotive] products didn’t exist at that time. We, of course, had spark plugs (auto parts), starter motors and generators, and pneumatic tools and hydraulics. It was a limited product offering and a relatively small pie of the overall Bosch offerings.

We conducted the first market studies for anti-lock braking systems at that time. But we decided it was too early for it. We would have liked to introduce the product, but the market was not mature enough. Besides, the product was far more expensive than it is today. Indian roads were full of Ambassadors and Maruti 800s. I was driving a Maruti Esteem, which was a nice car and my first vehicle in India. It was seen more as an upper middle-class car.

We had also planned the technical centre in India at that time, which is today the backbone of our engineering development—both on the gasoline systems and diesel side.

Q. You were the first managing director of Robert Bosch Engineering and Business Solutions. Tell us about this division.
It was a new legal entity looking at the software and engineering business and a few smaller businesses. It officially started in January 1998. The entity was specifically looking at engineering services for Bosch worldwide. Globally, Bosch has many divisions and Robert Bosch Engineering and Business Solutions is an overarching provider of engineering solutions. Today, the company, headcount-wise (with 17,500 associates) is the largest entity in Bosch, in India. More than half of our Indian employees work for this engineering unit. Also, it is the largest R&D centre outside of Bosch, in Germany.

Q. Fast forward to 2013 when you came back to head Bosch in India. What changed in the 14 years when you were away from India?
It [the business] had definitely grown in size; it had grown to cover all the Bosch divisions that are present worldwide. Initially, we had plans for just four or five divisions here, and now we have all the different business sectors and divisions in India. For example, the engineering business; we have the complete engineering value chain here. We have greatly moved from doing services, which we started off with initially, to having Centres of Competence in certain areas such as software, design and research, which is the most challenging part of engineering. Besides, the automotive market had increased substantially with all major global players having established themselves in India. The country is now the largest two-wheeler manufacturer in the world and moving steadily to also become a relevant player in the passenger car segment. This is a big change in not just numbers, but also in the quality of work.

Q. In the last three years, what have been the big milestones for Bosch Group India?
We invested in the future and this investment was in people, technology and manufacturing. We have invested to the tune of Rs 3,000 crore over the last three years. This is proof of us believing in India and in the future of this market. In 2015, we inaugurated three new plants—shifted our manufacturing facility from Bengaluru city to the outskirts in Bidadi; opened a gasoline systems facility in Gangaikondan, Tamil Nadu; as well as a power tools facility in Oragadam in Chennai. In between, we had some industrial relation issues [labour issues with worker unions], which we were able to sort out with no impact on customers.

Q. This period has also seen your India operations focus on non-automative sectors. Tell us about this shift in strategy.
Worldwide, about 60 percent of our business comes from the automotive sector. In India, if you exclude the software business, which cuts across all the business sectors, 80 percent of the business is from the automotive sector. So the potential to do more on non-automotive, or as we call it, beyond-mobility solutions, is quite big. For example, take the power tools business: In Germany, it is a consumer goods business because everyone owns a handful of tools thanks to the DIY [do-it-yourself] concept. Here, in India, the power tools business caters to only a high-end professional market.

In 2014, we had introduced our retinal eye screening camera, [a hand-held camera that can detect conditions like diabetic retinopathy, glaucoma and other conditions] with the specific purpose of providing affordable eye care in remote rural areas in the country. [According to global health statistics, nearly one of every three visually impaired people in the world is Indian.] Bosch’s eye screening and detection system was to bring global standards of eye care to India. It had been conceptualised and developed in India with state-of-the-art technology from across the world. It has been well received in different customer groups such as eye doctors, optical chains, and diabetologists. We are working towards increasing the sales substantially. Currently, we are working to further optimise the software of the product.

Q. In context to innovation, are you interacting with the startup ecosystem in Bengaluru?
We are actively looking at startups. Bengaluru has a big location advantage because there are so many startups working in various fields. We primarily look at startups that are related to our business or in adjacent fields. This is a very exciting phase. You can bank on so many entrepreneurs, who try things in a different spirit and do things much faster than we do as a big company. [On November 21, Bosch India launched its first accelerator programme for startups called ‘discover, nurture and align—DNA.’  The 18-week programme is an intense development, mentoring and piloting platform for startups. It offers startups the opportunity of gaining access to Bosch’s working environment and also being able to pitch their ideas to the Bosch management—Business Unit Heads—as well as other external investors.]

Q. How do you see Bosch in India evolving over the next decade?
The overall automotive market is changing fast—not only from the technology point of view but from the point of view of business models too. There is a move towards mobility solutions in which there are three major trends that we are seeing—electric, automated, and connected. Electric refers to electric vehicles; automated is about driver assistance functions like emergency braking, automated parking, and finally automated city and highway driving; connected is about the car being a part of the internet. All these changes will come about in phases. Some of these aspects will be more challenging in India because in India you have different road conditions. For instance, you don’t have lane discipline. So driver assistance functions won’t work in the same way as they would work in the US and therefore adjustments will be have to be made. That said, we think most of our products will be connected to the internet and we will not only offer products but also offer services around them.