MFIs and The Equity Jolt

Microfinance is an exciting new opportunity for equity investors. Or a perilous minefield 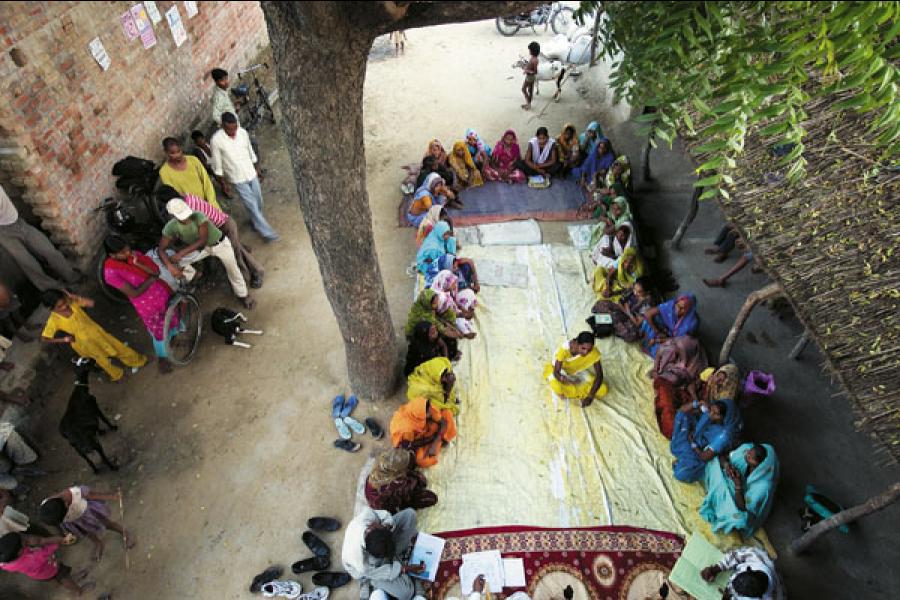 Image: Amit Verma
WHERE IT ALL BEGINS An SHG meet at Rae Bareli

Spectacular stock market booms often start in plush corporate boardrooms or the powerful corridors of investment banks in large cities. Rarely do they emanate from muddy gravel paths in far-flung villages, where poor women sit in circles and chat amid the clatter of passing cows and playful children. How can these semi-literate ladies handling a few thousand rupees at a time interest the world’s money bags used to talking in billions of dollars?

Yet in July this year, the collective attention of the investment fraternity was riveted on India’s villages, especially on the thousands of women’s groups that disperse and collect small sums of money among themselves.

It was the magic of microfinance that intrigued them. Lending to women from extremely poor families to help them buy seeds or set up a local business seemed such a cumbersome and low margin business. But it was the one business generating the maximum return on investment, much superior to the previous stock market darlings such as software and real estate. “Show me one business that is growing at 100 percent a year and giving a return on assets of 6 percent,” says Anurag Agrawal, senior vice president of investment banking at advisory firm Intellecap. While smart private equity investors had sneaked into the sector five years earlier, the sector was opening up for the first time to public investors via the initial public offer of market leader SKS Microfinance.

The vote from the stock markets was a decisive affirmative. The SKS IPO was oversubscribed 13 times. It sold at a price-to-earnings (P/E) multiple of 41, three or four times the valuation of the large banks that gave their money to SKS to lend. Upon listing, the stock zoomed to a P/E of 60 within six weeks. Half a dozen microfinance institutions (MFIs) lined up their IPOs and started talking of valuations in thousands of crores.

But it was destined to be a short honeymoon rather than a long marriage. Things turned sour without notice. First came the news of the unceremonious and mysterious exit of SKS CEO, Suresh Gurumani. Then the suicides of some poor people in Andhra Pradesh were linked to the MFI industry prompting regulators to clamp down on the sector. Analysts reacted quickly; they said MFIS’ profitability could come down and their 100 percent growth was unsustainable. A whole flock of disappointed investors fled the only major MFI stock, SKS. It lost a third of its value in a few days. And it took down the hopes of IPO aspirants and the whole sector down with it.

“There is quite a bit of uncertainty in the sector now. The euphoria has been replaced by concern. It will be a hard and long road for most MFIs from here on,” says a Bangalore-based venture capitalist. Investors are now confused. They came into the sector expecting to make money from the immense potential for financial inclusion for India and the high profitability enjoyed by MFIs. But now with MFIs on the defensive, the promise of high valuations seems to have evaporated.

Reasons for the crisis vary. Some say the MFIs have adopted an aggressive and usurious business model to show extraordinary growth to their investors. Others blame investors for nursing over expectation. Some think the politicians and regulators are over-reacting. There are several unanswered questions that must be resolved before the microfinance sector can find favour with the stock market again.

Is the opportunity real or is microfinance a bubble?
Financial inclusion is an undeniable opportunity for stock investors. With 27 million customers, MFIs have only scratched the surface of this opportunity. As the next phase of economic growth moves into smaller towns and villages, hundreds of millions of people will come into the financial mainstream. They will save their extra income, borrow for agriculture, business and consumption and transfer money between one another.

Just take loans. MFIs today have a combined portfolio of more than Rs.25,000 crore, in fact nearer Rs. 30,000 crore. “It is a highly capital intensive business with no collateral backing for loans. If there is a default, it is a clean write-off. So the hunger for capital is huge,” says Brahmanand Hedge, founder and CEO of Vistaar Livelihood Finance. Norms require a capital of 20-22 percent of loans. That is Rs. 6,000 crore of capital floating right now. As the industry doubles and quadruples in size, MFIs will have to raise money through equity to support that growth.

Despite the hype and the disappointment, MFIs and other financial inclusion projects are a real investment opportunity.

What will happen to growth and valuation now?
Andhra Pradesh, the country’s largest microfinance market, has brought in tight regulations that could affect growth. Also, the focus of smart MFIs is shifting from merely increasing the number of customers to qualitative parameters like cost control, transparency and widening the product portfolio.

Despite recent stock market reverses, SKS continues to trade in excess of 40 times 2009-10 earnings. Unless fresh jolts are felt, the valuation could stabilise and some of the panic go away. However, valuations are directly related to interest rates. In the long term, MFIs will be forced by regulation and competition to reduce their rates. Microfinance experts Bindu Ananth and Nachiket Mor, citing a paper by Chaudhary and Roy, say that every 1 percent drop in interest rate that a 500-branch MFI charges leads to a drop in its valuation by Rs. 150 crore.

“Valuation has a correlation with profitability. There is a scarcity premium for SKS now and that premium might continue even after three or four MFIs list on the market. There are so many funds that want to participate in these stocks,” says Sandip Sabharwal, CEO of portfolio management at brokerage Prabhudas Lilladher.

Are MFI profits excessive?
More and more insiders are admitting so. MFIs typically charge anywhere between 24 percent and 30 percent, better than the loan shark’s 40-100 percent but still too high for poor people. Vijay Mahajan, chairman of BASIX, blames the industry for not keeping its promise to have reduced its rates further by now. MFIs enjoy about 6 percent return on assets and nearly 50 percent return on equity. The paper cited by Ananth and Mor says that even if MFIs cut their interest rates by 10 percentage points, they will still make a return on equity of 25 percent.

“The return on assets for MFIs is disproportionately high relative to assets of similar credit quality,” says Ananth. She puts the excess at 3-4 percent of RoA.

Will interest rates and margins come down?
Surely. Sabharwal says the regulatory pressure is on. Ananth says MFI costs have been quite optimised and there is no reason why they can’t pass on those benefits to customers. “The NPAs are consistently below 2 percent. An average loan officer meets 700-800 clients a week. That is amazing throughput. The efficiencies are there, the business is profitable and the rates can come down,” she says.

How low can interest rates go? Not much, unless the rates at which banks lend to MFIs also go down. “If the rates are capped at 16 percent, or even
20 percent, it will kill the sector,” says the venture capitalist.

What is the conflict?
MFIs are often accused of profiting from poverty. This attitude ignores the fact 27 million poor people have no problems with MFIs (“Whatever the controversy, the clients always come back, says Ananth). But the bigger question is whether pressure from investors to boost profits undermines the MFIs’ ability to reduce interest rates and be socially responsible.

Agrawal of Intellecap says the conflict doesn’t exist because investors know that the extraordinary growth rate and profitability cannot last forever. “Investors, in fact, are comfortable with a return on assets in the range of 3-5 percent, not 6 percent. They would actually like the number to go down to that range,” he says.

But many others in the industry as well as the stock markets see signs of conflict between investor expectation and what is good for MFIs in the long run. When entrepreneurs made presentations to PE firms, high rates of growth was their selling point. The investors have bought into the growth story and now is the time to deliver. So, most MFIs continue to run even though they know slowing down is better for them. This emphasis on growth also breeds dangerous practices like multiple lending.

How can investors differentiate a good MFI from mediocre ones?
Obsessed with growth, many MFIs and investors have ignored qualitative progress. These factors will become important when several MFIs get listed on stock exchanges and have to compete for investor attention. Hegde lists at least four aspects to look at. First, better governed institutions will be able to attract more banks to lend to them. Investors must check which banker is lending to whom. “When a banker takes a view today, it will become the industry view tomorrow.”

Next, the P/E ratios will begin to show differentiation between well-run MFIs and badly run ones. Third, growth will be superior in MFIs that go to unchartered territory. Look for those serving areas like Bihar and Jharkhand where microfinance penetration is low.

Last, MFIs that boost the income generating ability of its customers will be able to do more business with them through value-added services.

The SKS IPO should have marked the beginning of a phase of maturity for the MFI sector with a premium attached to stability, conservatism, product variety and understanding of customers, says the venture capitalist. “But with all the attention on the problems in Andhra Pradesh, it looks like the period of maturity will not start immediately,” he says.

“I don’t think anybody can go in for an IPO in the next three or four months.”

Tweets by @forbes_india
YSP Thorat: The Poor Do, Indeed, Save
What Is the Best Way to Remove Poverty?