How India can save its urban heritage

Conservation of urban heritage has come a long way, though there is still some to go 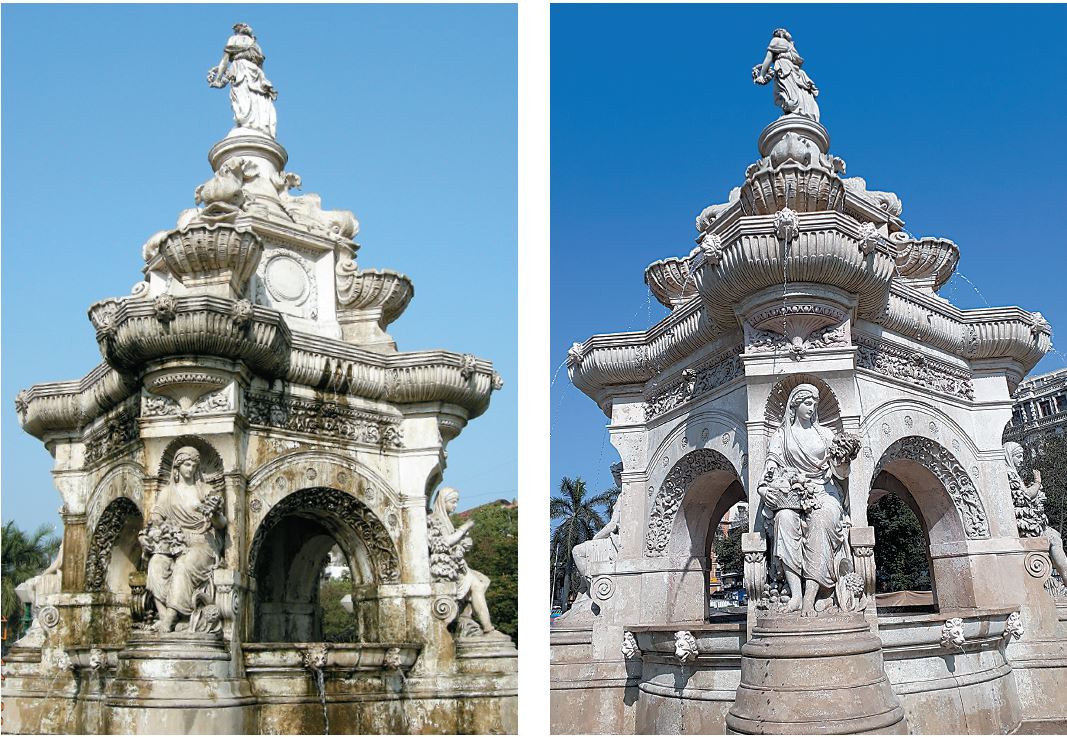 The before and after look of Mumbai’s Flora Fountain. It took two years to scrape off the paint applied in the name of renovation to reveal its original colour

When Vikas Dilawari started his practice in 1989, architectural conservation was a relatively unknown occupation in India. The first project that came to him, a few years later in 1993, was from a Parsi trust that commissioned the restoration of the Byramjee Jejeebhoy Parsi Charitable Institution in the Charni Road area of Mumbai. Besides these private entities, there were few supporting the conservation of heritage structures at the time. There were no guidelines in place either, besides what Dilawari had grasped while pursuing a masters degree in conservation at the School of Planning and Architecture in New Delhi and then at the University of York. That first project is something that his team maintains even today, even as the field itself has made rapid progress, which in turn has helped such heritage structures survive amid the pressures of urban development.
It wasn’t until 1995 that the Heritage Regulations for Greater Bombay were put in place by the Maharashtra government, which turned out to be the first set of guidelines for architectural conservation in the country. The following year, the Heritage Conservation Society was established by the Mumbai Metropolitan Region Development Authority to give their recommendations on conservation affairs. Mumbai became a pilot project of sorts and, in the next few years, similar bodies were set up and regulations implemented around the country. “Until 1995, the only agency that was doing conservation was the Archaeological Survey of India (ASI). And they were primarily looking at monuments and sites that were not really in use, such as forts, temples and monuments. There was no other mechanism to protect historic buildings,” says conservation architect Abha Narain Lambah. “What happened that year was a paradigm shift towards conservation. And that was a game changer.” Lambah says Mumbai’s heritage list had 633 entries in 1995 that ranged from very large buildings such as the Chhatrapati Shivaji Terminus and the Bombay High Court, to smaller urban structures like fountains and pyaus. It demystified conservation by changing the approach from being monument-centric to including other structures that are important enough to protect. Yet, there weren’t enough qualified practitioners to formulate a plan and execute it. Early Days While Mumbai took the lead on heritage conservation, in places like New Delhi it took until 2010 to have any such regulations in place. Monuments such as Humayun’s Tomb and the Qutub Minar drew their fair share of attention from the ASI, but smaller structures and private residences went unattended. Architect Aishwarya Tipnis considers it to be a problem of plenty. “We have so many monuments in India. One of the early projects I worked on was the first private restoration of a haveli in Old Delhi. And it didn’t start out as a conservation or restoration project because the owner simply wanted to renovate the property,” Tipnis recalls. “Mumbai started out almost 15 years before other cities in India, so there are more people who are conscious and willing to give. I haven’t really seen as much participation in Delhi.” 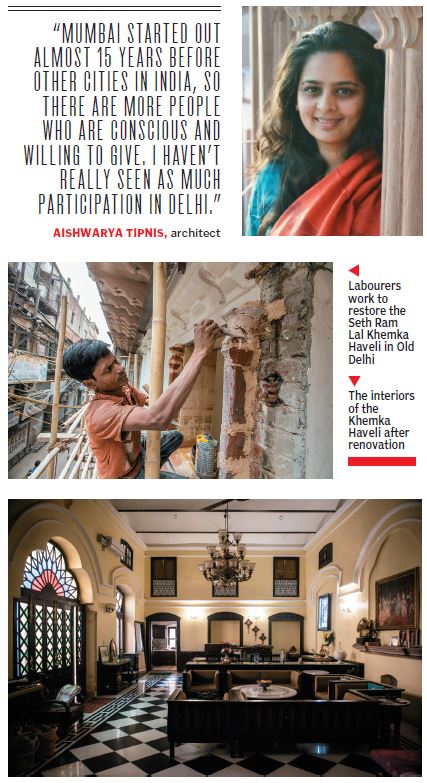 One of the first projects that Lambah worked on in 1998 was to establish conservation guidelines for Dadabhai Naoroji Road, a commercial spine of Mumbai, plastered with shop fronts, signboards and hoardings. At the same time, she joined hands with a few others to establish the Kala Ghoda Association and started working with the Horniman Circle Association, both comprising locals who were keen on conservation. “There was no funding agency, no grant programmes and very low awareness. People didn’t even know what a conservation architect did,” she says. As part of the pilot project, they approached financial establishments in Horniman Circle, and asked them to donate ₹1 lakh each. Though they managed to raise just ₹6 lakh, they used it to restore the facade of Botawala building, which was in terrible shape. At Kalaghoda, the team used donations to restore the facade of Elphinstone College. “Different people came together because they felt a sense of responsibility towards their city, where heritage is what you engage with every day—schools, stations and libraries. From Mumbai, it spread to cities like Delhi, Kolkata, Nagpur and Hyderabad,” says Lambah. Although groups of citizens began to get interested in conserving, the tools for doing so were still missing. Lambah recalls working with general building contractors and trying to raise their skill set to work on specialised conservation projects. She had to innovate as well, such as mount irrigation sprinklers on a scaffolding and sync it with a timer to create enough mist to clean stone surfaces without damaging them. Dilawari came across many layers of paint that had been applied in the name of conservation to Flora Fountain in South Mumbai. It took two tedious years to scrape it off and reveal the original colour of the Portland stone. There were also times when the only documented evidence were black-and-white photographs, making it impossible to know what some structures originally looked like. “When no reference is on hand, it’s mostly a conscience call. It’s an attempt at perfection in order to do it in the best possible manner,” he says. “There are a lot of forensics involved, besides historical research. For instance, while working on the master plan of Viceregal Lodge in Shimla, it was Lady Dufferin’s diary that revealed the colour schemes. For Opera House in Mumbai, we found a little brochure that had been published during its opening in 1916. And for the Moorish Mosque in Kapurthala, it was Brigadier Sukhjit Singh, the grandson of Maharaja Jagatjit Singh of Kapurthala, who remembered the colour palette,” Lambah says. Once restoration itself is over, conservation architects are also known to present a periodic maintenance plan, where funds are often generated through on-site events or by leasing out sections to commercial establishments, as in the case of Bikaner House in New Delhi. In a few projects such the Muljhi Jetha fountain in Mumbai, the owners of a few restaurants in the vicinity volunteered to take responsibility for security and gardening. 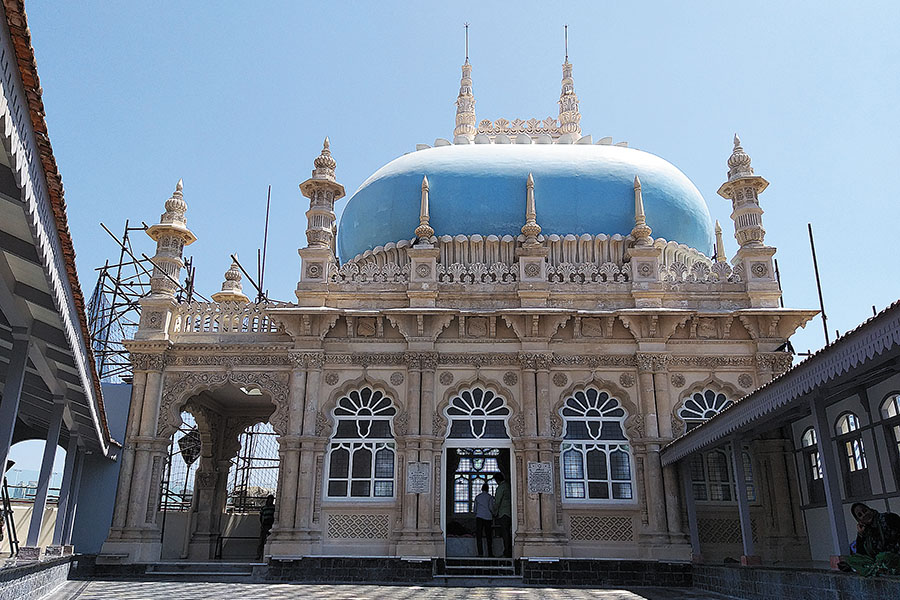 More hands
The infrastructure for conservation is today more well-rounded, with organisations such as the Indian National Trust for Art and Cultural Heritage (Intach) and International Council on Monuments and Sites (Icomos) having stepped up with their know-how.
As one of its functions, Icomos, in its role as advisor to Unesco, conducts studies and lists recommendations for World Heritage sites. India has 38 such sites (cultural, natural and mixed), the latest being the city of Jaipur, which was added this June. Rohit Jigyasu, vice president of Icomos-India, believes there is a need to look beyond the colonial legacy and the preservation of more than just a few monuments. “Our conservation guidelines and principles are based on the West’s, but the heritage in our part of the world is very different. It’s not a relic from the past; rather, it’s living heritage. There is a lot of thought around this by academics and practitioners, but it has not been put into practice through legislation and government intervention,” he says. In France, for instance, the government supports heritage precincts by offering subsidies to private owners for maintaining their property; renovation work is carried out as per the character of the area. “In a developing country, a lot of resources are assigned to the basic needs of people, so heritage conservation becomes secondary,” says Jigyasu. “Besides, when you spend so much money on, say, the Taj Mahal and then build a boundary wall and separate it from the local context, people are not really going to understand the heritage movement.”
On-ground challenges are aplenty, starting with funding, given that India has numerous heritage structures across the country. For state-owned structures, restoration is at times funded by municipal bodies or money that comes via corporate social responsibility funds; the latter, mostly, going to projects that draw eyeballs. “The concept of urban heritage conservation started in 1967, when the UK enacted the Civic Amenities Act, but we’ve made rapid progress in the last 15 to 20 years and are at par with global efforts. But there remains a gap between policy and implementation,” says Tipnis. “But whenever there is going to be a battle between real estate development and conservation, you know the former will win.” Conservation becomes a testing process in the case of private properties, where landlords continue to collect measly rents. For instance, buildings that fall under the Maharashtra Rent Control Act, 1999. This has resulted in tenants paying a pittance, while refusing to vacate the property, which makes it hard to maintain them. Modifications first require permissions from the Mumbai Heritage Conservation Committee. “On one hand, it’s called the city’s heritage while at the same time they don’t have any funds to maintain it. So, the public asset now becomes a private liability,” says Harshad Bhatia, an urban designer. “Our guidelines have been framed with a sepia-tinted, picture postcard view of what it was back in the day. You have to look at it from the living heritage point of view and the growing needs of the population.” 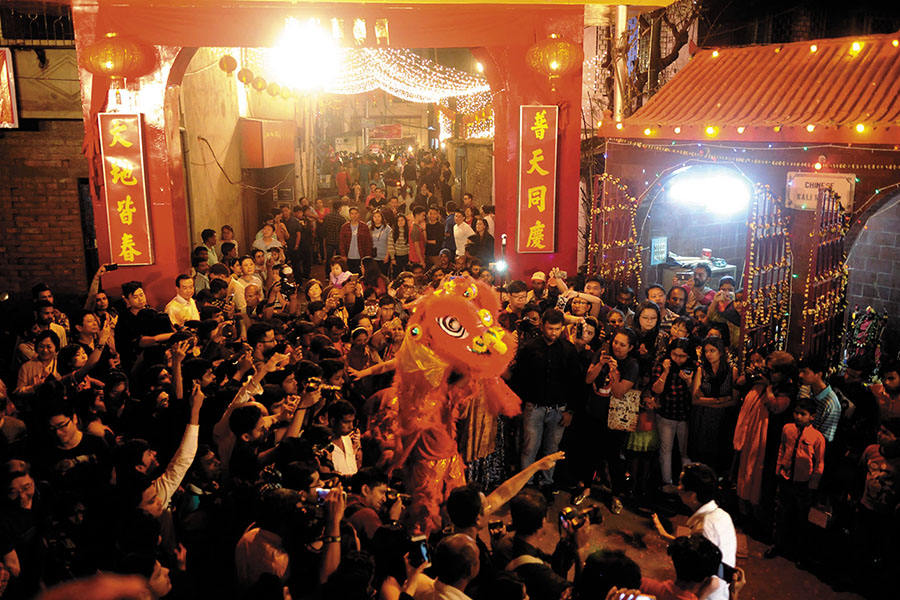 Conservation in Kolkata’s Chinatown went beyond individual monuments and edifices, to a more inclusive movement of bringing the community on board

Beyond buildings
A larger approach to conservation applies to neighbourhoods, and goes beyond the restoration of individual monuments or edifices. The idea is to give residents of these areas an identity and relevance. “Only those with the financial means would be open to having their property declared as heritage. The rest consider it to be a stigma, since it stalls their development. So the movement really is going one step forward and two step backwards,” says Bhatia.
One of the key projects that urban conservationist Kamalika Bose has worked on is the Chinatown quarter of Kolkata. At first, the locals couldn’t understand the interest that she and her team had in their area. “They lacked an identity, since they had been marginalised in all sorts of ways over the years. So we first had to get the community on board and get them to take pride in their neighbourhood,” she says. Bose first produced a book that documented the heritage of the area and handed it out to each household to mobilise the community. Two years later, they transformed a common space into a Cantonese restaurant. Over time, even tourists to the area started to have a more meaningful experience. “Gradually they started thinking that maybe there was something to look into after all. It’s had a ripple effect today, where smaller initiatives like pop-ups and festivals are being celebrated with a wider audience. Only when they feel a sense of belonging as equal citizens of Kolkata, will they make efforts towards saving their heritage,” Bose says. “Conservation needs a holistic approach that goes beyond restoring a few buildings.”

Tweets by @forbes_india
Ten interesting things we read this week
Citing economy, Donald Trump says Americans have 'no choice but to vote for me'