Urban hydroponic farmers are making it possible to eat fresh, pesticide-free produce, with no soil use 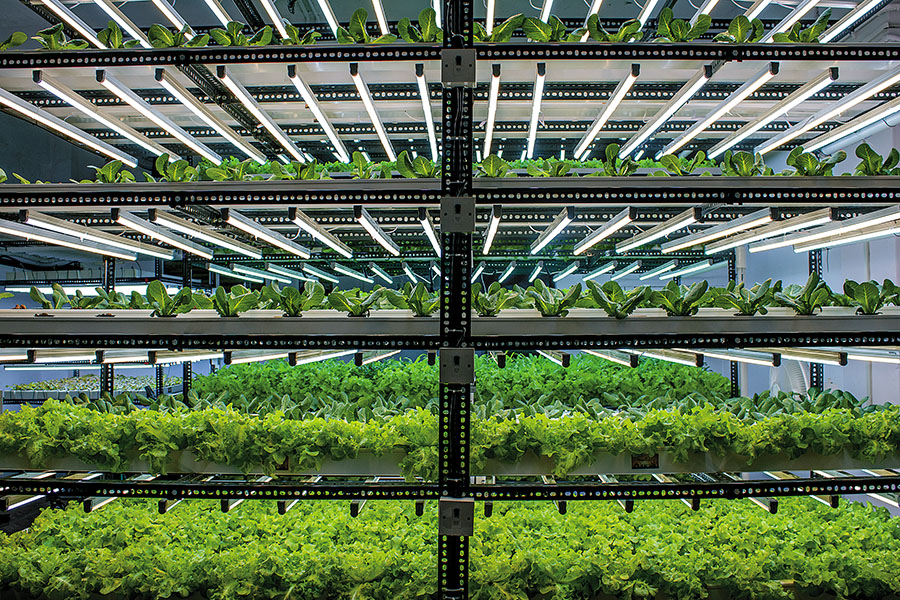 Herbivore Farms, in Mumbai's Andheri, is spread across 1,000 sq ft and grows about 2,500 plants

In the middle of an industrial building in the Andheri East neighbourhood of Mumbai is a farm. It is spread across 1,000 sq ft and grows 2,500 plants. It is no ordinary farm. The hum of an air conditioner greets visitors into the room, tube lights replace sunlight, and there’s no soil on the patch. Herbivore Farms is an example of a newly popular and successful type of urban farming—hydroponics. Simply put, it is growing plants in water. Soil is replaced by a water solution that is rich in macronutrients like nitrogen, potassium, phosphorous, calcium nitrate and micronutrients like manganese, zinc etc. A ‘grow system’ controls the balance of nutrition, humidity and temperature, uses less water than soil-based farming and increases yield without chemicals or pesticides.

“There are many advantages to urban farming. The land requirement is quite low, water consumption is 80 percent less, the water is recycled and saved, it is pesticide-free and in cases of high-tech farms there is no real dependency on the weather,” says hydroponic farmer Ajay Naik of Letcetra Agritech in the Sattari district of Goa.   Hydroponic farming is setting up roots all across India. Sakina Rajkotwala and Joshua Lewis, of Herbivore Farms, have come into focus in the last year. In Manori, Linesh Pillai started Terra Farms as a pilot project before taking the idea countrywide. Delhi has Triton Foodworks; Noida has Nature’s Miracle; Chennai has Sriram Gopal’s Future Farms and Rahul Dhoka’s Acqua Farms; and Gurugram-based company, Barton Breeze, has six farms across Haryana, Rajasthan, Uttar Pradesh, and Uttarakhand. 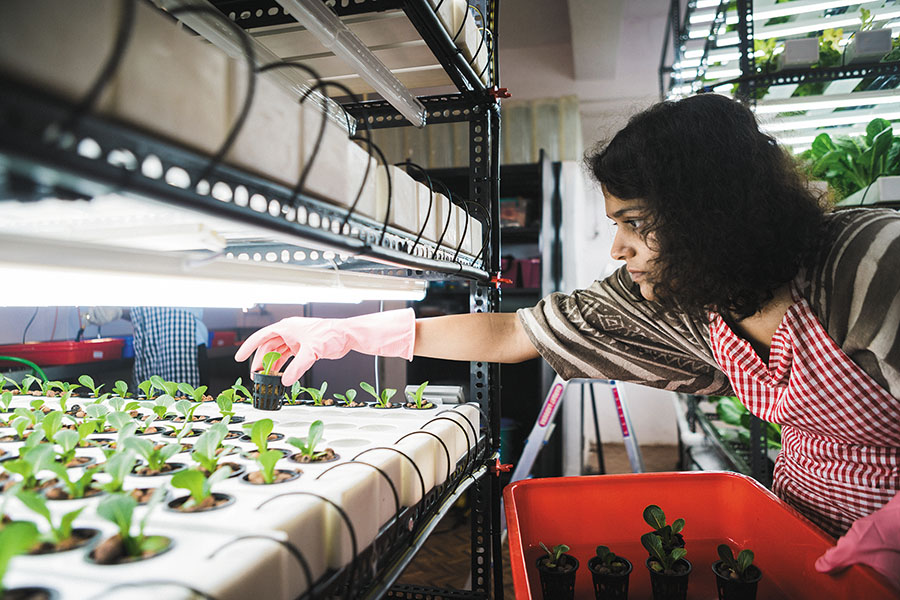 “Hydroponics and other soil-less farming techniques can help us take our agriculture and farming industry to the next level,” adds Naik. The new farmer
The path to hydroponic farming is paved with good intentions: Sustainable farming and the desire to eat fresh, organic, zero-carbon food. Rajkotwala and Lewis’ journey began after they quit their jobs at Magic Bus and Directi, respectively, and decided to seek out their purpose in life. The question of ‘who we are’ led them to examine what they eat and how to grow it, and a stint at an Auroville farm, and eating fresh produce, turned out to be the change they sought. “It was a revelatory experience, as it opened our minds to the importance of food,” says Lewis. “We wanted to replicate that farm model—pluck vegetables and eat them fresh—in the urban space.” Hydroponics made the most sense, and they started with a small farm on Rajkotwala’s terrace in Juhu in 2017 and moved to Andheri in 2018. Herbivore Farms’ set-up is a good example of how a hydroponic farm functions. It consists of a covered germination chamber that uses biodegradable sponge to sprout plants, a nursery where net cups (small planters) are filled with clay pebbles for support and structure, and the grow systems where the plants become fully grown. It involves metal stands, PVC pipes attached to a covered nutrient tank that pumps water to the plants, and tube lights. Once the plant grows roots, it is transferred to a system with higher nutrients in the water, where it is fully grown and harvested. Everything, from the humidity and temperature levels to the amount of light, nutrients and water, is controlled. Although most hydroponic systems function in a similar manner, every farmer has his/her own customised grow systems, lights, seeds, and growing methods. The farms can be indoors or outdoors (a greenhouse). The vertical system ensures produce is plentiful (vertically stacked plants means there are more of them in the same area) and growth is quick, sometimes within seven days, as they get light round the clock. At Herbivore, the produce—it comprises sorrel, basil, microgreens, edible flowers, lettuce varieties, Swiss Chard and peppermint—is packed into boxes and sent to customers via a subscription model. Most other farmers sell their produce at markets, gourmet stores, restaurants, cafes and salad bars, and to businesses. Pillai of UGF Farms (earlier Terra Farms) in Manori, doesn’t just sell his produce at markets in Mumbai, he also sets up grow areas in restaurants, hotels and community spaces and has done so in over 30 locations in five cities, including Moscow. He does this to reduce the journey of the food from farm to consumer. Pillai started his own farming journey in 2014, converting 500 sq ft into a prototype, which he now replicates. The farms he sets up produces microgreens, microherbs and leafy greens. “It is food that grows in a space where it is consumed and never goes through logistics. Today, food takes much longer to get to our plates and in the interim, most valued nutrients are lost. By this method, food is consumed right after harvesting… it cannot get fresher,” he says. 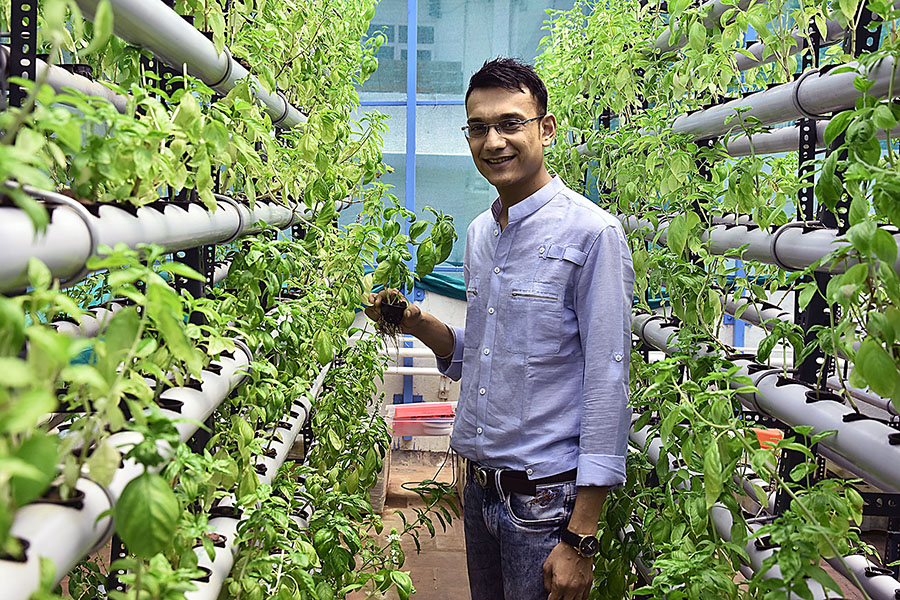 In Chennai, Rahul Dhoka has an 80 sq ft terrace farm producing kale, bok choy, Italian basil, thyme and mint, all for his family of six. The industrial biotech graduate started out in the organic business before turning to hydroponic farming last year. He now has three farms run by friends and family but his focus is on his hydroponic farming consultancy, Acqua Farms. Experiments with food
Some soil-free farmers aren’t content with just growing their own vegetables and selling them. They want to spread the good word through workshops, sales of kits and systems, and advice. Dhoka believes in encouraging more people to become farmers. “After we started in 2016, we got many requests for helping people build systems that could work in confined spaces such as balconies and terraces,” he says. Acqua Farms sells affordable ready-to-grow kits priced between `750 and `7,500, which include pipes, cups, growing media, four varieties of seeds, nutrients for three months, and an instruction manual. “We offer consultations for two harvests. Customers send us updates every week and we give instructions and modify things,” he says.  What Dhoka and other consultants are also selling is the idea that ‘anyone can do this’. There could a downside to that notion. “Today, people seem more hell bent on selling equipment and setting up farms but not helping you grow them. There’s a common misconception that it’s modern and easy to do and once you set up a system, everything takes care of itself,” says Rajkotwala. When Herbivore Farms began, the duo had no external help or experience, and persevered through trial-and-error, online tutorials, videos and articles. Hydroponics, she believes, is a continuous learning process. It isn’t a one-size-fits-all concept. It’s why Vijay Yelmalle started the Center for Research in Alternative Farming Technologies (Craft) in 2016 in Navi Mumbai, training over 2,000 aspiring urban farmers in hydroponics and aquaponics, the latter being a system in which water from a fish tank is pumped to the roots of plants growing above it. Yelmalle has a 15-acre plot in Raigad where he is prototyping systems for aquaponics and hydroponics. His company is incubated by Indian Council of Agricultural Research (ICAR).  Training takes place on the weekends and includes talks about the basics of agriculture, organic farming, the produce market and suppliers, hydro- and acqua-ponics, and how to build simple systems. Trainees are then added to WhatsApp groups that include field experts. “Urbanites who come here have read about hydroponics; they have vacant land or homes, and want to start their own business. They think agriculture is very easy. My intention is to make them aware of all aspects, good and bad, and let them decide. If they go ahead—about 40 per cent do—I provide support,” he says. “This is not a part-time job and you cannot pass it on to someone else.” For the serious farmer, there are no fixed templates to learn from, and most prefer doing their own research and experiments. Legal issues and permissions are an unexplored area. There isn’t enough material on how to grow Indian vegetables using this method, which is why most farmers end up growing ‘exotic vegetables’ with imported seeds. Many of the components required to build these grow systems have to be imported too, increasing the carbon footprint of what is a low-carbon cultivation method. The initial investment into the farm can be quite high; the cost of setting up one acre of land can start from ₹30-35 lakh. “The only disadvantage of this method is that it is capital-intensive,” says Dhruv Khanna of Delhi-based Triton Foodworks. “But, from a business point of view, at conservative figures you can break even in three years or less.” He and his friends started out by growing strawberries on a 750 sq m set-up at Sainik Farms, near Delhi, in 2014. It’s been a rollercoaster ride since: An investor came in but left soon, one of the four original founders dropped out, and their first greenhouse was pulled down by the municipal authorities, who believed they were building a house.  Triton then picked up turnkey projects to supplement the income from selling farm produce. In 2018, they set up an outdoor hydroponic farm in Gurugram, selling vegetables under the label Chop Chop by Tritons. They cut costs by using local material, customising their lights, stands and systems; they import only the cooling systems for the greenhouse. “We have saved over 2.5 billion litres of water using our technique in four years,” says Khanna. “Our vertical systems grow food in just one-eighth of the area required for traditional farming.” 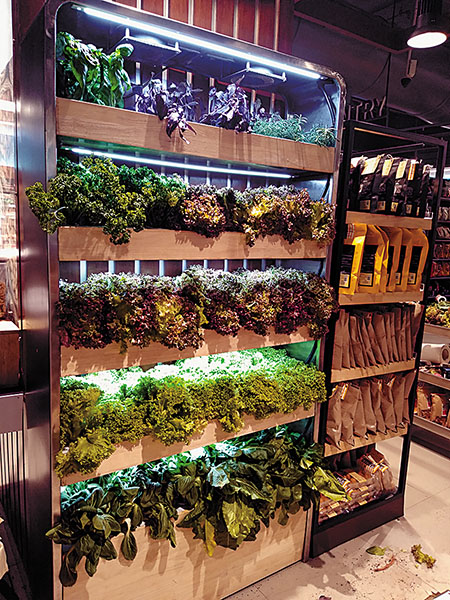 Terra Farms, which is started by Linesh Pillai in Mumbai’s Manori last year

The bigger picture
Hydroponics is beneficial, not just to the consumer who gets to eat pesticide-free, fresh produce, but also to the farmers who are not dependent on erratic weather, natural water levels, and soil contamination. “Climate change poses a major challenge to food production,” says Naik. “Hydroponics can be conducted in controlled environments and within the safety of greenhouses. The cherry on the cake is better quality food.” Rajkotwala and Lewis believe this sustainable form of farming can make a difference to the country’s agricultural sector. Herbivore Farms is working on figuring out how to grow local Indian produce through hydroponics and how to make their current produce relevant to people or “teach people how to use Swiss chard to make palak paneer”.  Meanwhile, Pillai puts the onus on the city, community, and individual to make the change. “One can produce as much as 100 kg a month in as little as 1,000 sq ft of space all year round. A typical window in a home can produce up to 1 kg every week. Just imagine what we could achieve if every household could grow that much.”