Of Mishti, Mughals and Noodles: A history of Kolkata's street food

A brief lesson in Kolkata's history, through its food 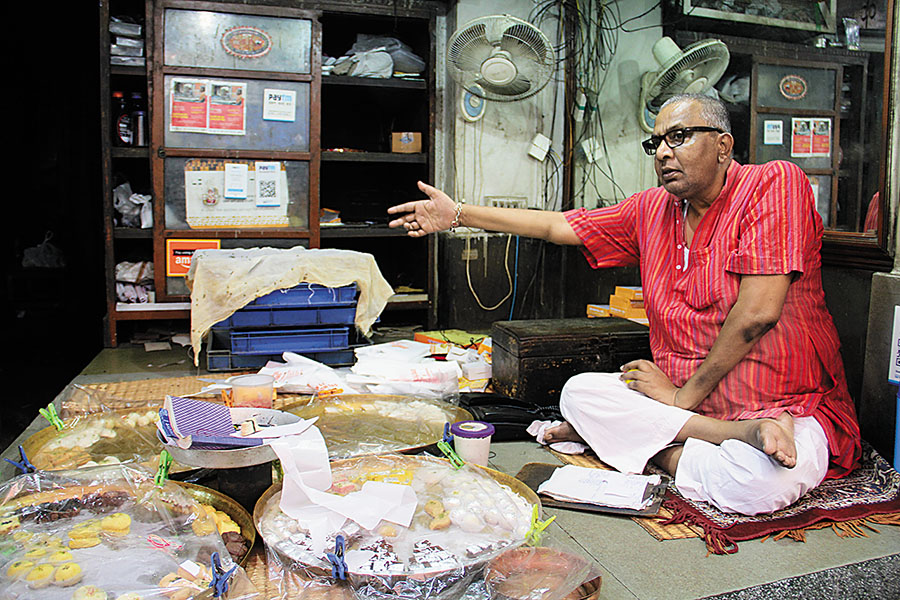 Inside the bustling Natun Bazar neighbourhood of North Kolkata, we walk through narrow, muddy lanes, lined with small shops and homes, stray goats, and children playing, to Makhan Lal Das & Sons. The factory-cum-shop has been in the business of selling sweetmeats since 1830, and its nondescript appearance is no indication of its lineage. Shib Nath Das is the ninth generation of a family that came from Debrajhat village in the Purba Bardhaman district of West Bengal to first sell sweets in the local haat, or market; he sits on a wooden platform, supervising the sweets that are being made to order. Thickened milk is made into chena (cottage cheese) and then into sandesh (sweets), sometimes with nolen gur (palm jaggery), sometimes chocolate, and sometimes a dash of saffron. Two large plates in front of Das contain the samples of the day, with fanciful names like ‘Mono Hara’ (one who steals your heart) and ‘Abar Khabo’ (I will eat again). Wooden moulds in different shapes and sizes lie on another board, where an artisan makes conch shell-shaped sweets. Small clay cups of creamy mango curd and different varieties of sandesh are offered to us. Mishti, or sweetmeats, is an integral part of Kolkata’s cuisine. Many attribute the beginnings of the sweet industry to the Portuguese who introduced cottage cheese to the region in the 16th century. Others claim that in those days, the milkman would often be left with unsold milk at the end of the day that would then go sour, and, therefore, chena was made (by curdling the milk) and mixed with sugar to make it more palatable. 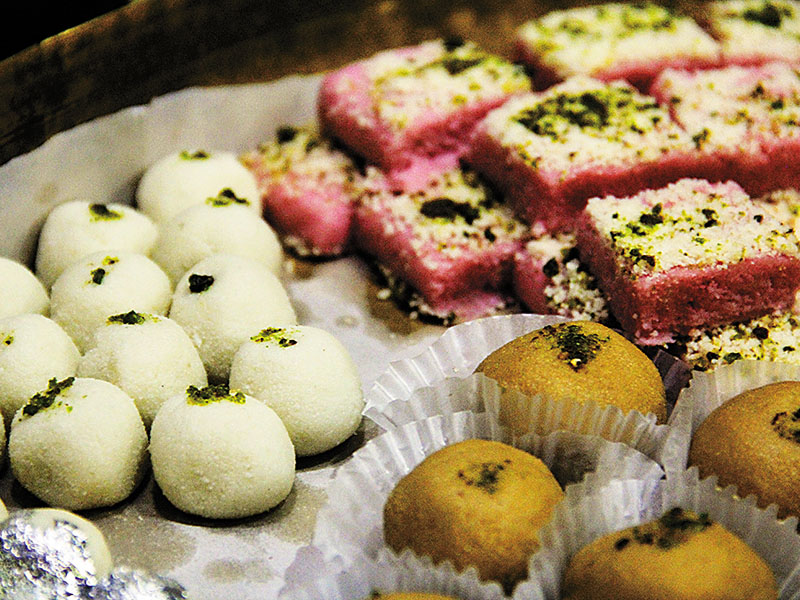 Kolkata is a veritable melting pot, with the British, Portuguese, Chinese, Armenians and Jews making it their home when the city became the hub of the East India Company in the mid-18th century. Its culinary heritage is a product of all these cultures and communities, which I am in the process of discovering while on a culinary trail curated by Novotel Hotels and Residences, and Indrajit Lahiri, a food blogger. By sampling some quintessential items from the city’s diverse foodscape, we get a peep into the culinary history of more than 300 years in the course of a few days. The Neighbours from Next Door
Kolkata was home to India’s largest Chinatown, with the Chinese coming to the city in the late 18th century to set up sugar mills in a neighbourhood called Achipur, on the invitation of the British. We walk through the narrow lanes of Tiretti Bazar, which is one of the two Chinatowns (the other being in Tangra) where every morning prawn baos and dumplings are served for breakfast from the sidewalks. Large stacks of aluminum steamers are set up on makeshift tables: There’s siumai—Cantonese pork and shrimp dumplings—fish ball soup, and even Chinese bread shaped like churros. One vendor sells Chinese sauces, spices and noodles. It’s a communal atmosphere, with people sitting on plastic stools and reading Chinese newspapers, while others chat with friends. 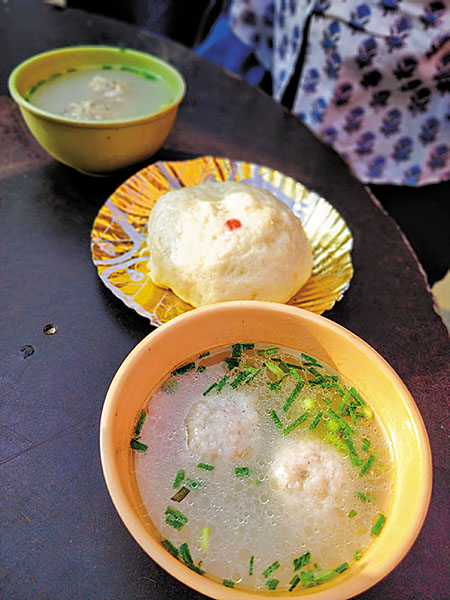 We continue on our Chinese food trail with a visit to Eau Chew, one of the oldest family-run Chinese restaurants in Kolkata, which dates back to the 1920s. It is located on the first floor of a building in the rundown compound of a garage, above a closed petrol pump, and is open for only 7 hours a day. Red Formica-covered tables and a no- frills ambience, with only a fish tank and framed photographs of the first owners for decoration, indicate that this experience is all about the food. Joel Huang, who runs the restaurant today with his mother Josephine and wife Doren, says his great-grandparents came in the early 20th century and set up a small tiffin house for Chinese immigrants at the same location, although the name Eau Chew, in Mandarin, means ‘Europe’ and was intended to attract a European clientele.
The chimney soup at Eau Chew
Image: Kalpana Sunder

Right from chopping vegetables, cooking and billing the customers, everything is done by Josephine, Joel and Doren. They follow traditional recipes with no improvisations or variations. “Our customers know what they like here, and come to find that,” says Joel. We have their famous ‘chimney soup’ that is kept hot with glowing embers of coal, steamed fish with soy sauce, and hearty ‘Josephine noodles’ created for a customer who wanted to eat something off the menu and different. The dish comprises noodles topped with gravy, vegetables and meat. Many of the old-fashioned Chinese restaurants of the city, such as Nanking and Song Hay, have shut over the past few decades; Chung Wau in the Burra Bazaaar neighbourhood is one of the last of these restaurants that are still in operation, with cabins named after Bengali classics. It remains famous for its food, which includes roasted chilli pork and other dishes based on authentic recipes from Hakka Chinese immigrants. The old has slowly given way to the new, with chains like Mainland China serving more popular versions of Indian Chinese food. The Anglo-Indian Angle
To get a taste of the city’s Anglo-Indian food—one of the pillars of its diverse culinary heritage, which is  an amalgam of  Portuguese, French and British  influences—we go to Scoop, inside the New Empire Cinema complex, in the Dharmatala area. It is an ice cream parlour and multi-cuisine restaurant owned by Joanna Mantosh, an Anglo Indian, and her husband. They have cooked up a special Anglo-Indian meal for us: Jungli pulao with chicken curry, yellow rice with coconut milk and turmeric, pantaras (deep fried, breaded meat-stuffed pancakes), and chicken vindaloo. Anglo Indian food was not an integral part of the restaurant scene in Kolkata in the past; it was cooked more at home by families, and shared within the community and served in a mess or canteen run by the community. In the early 19th century, Kolkata was home to a vibrant Jewish community of almost 20,000 people. Today, even though the community has dwindled, their beautiful synagogues, such as the Magen David and the Beth El in the Burra Bazaar area, survive and are manned by Muslim caretakers. Inside the labyrinthine alleys of New Market in Dharmatala, lined with shops selling everything from Portuguese ‘Bandel cheese’ to garments, furnishings and crockery, stands Nahoum, the oldest Jewish bakery in town. 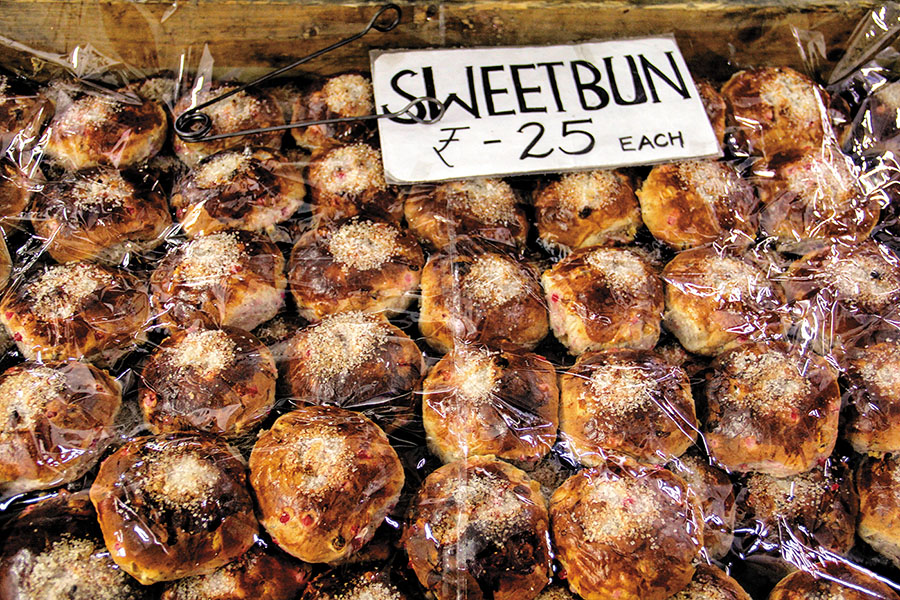 Founded by Nahoum Israel, a Baghdadi Jew, in 1902, the shop houses vintage teak wood furniture, and glass shelves heaving with fruit and plum cakes, rum balls, lemon puffs, cream-filled pineapple pastries and fruit buns. The fourth generation of the family continues to own and run the bakery and shop, which have now become a precious piece of nostalgia in Kolkata’s food fabric. Our next stop is Nizam’s, next to New Market on Hogg’s Street. A no-frills restaurant, it is supposed to have invented, in the 1930s, one of the quintessential elements of Kolkata street food—the kaathi roll. The origins of the iconic roll are a bit hazy: Some say it was made for a customer who wanted a non-messy on-the-go snack, while others say it was made for finicky British clients who did not want to soil their fingers. “It’s a perfect snack of carbs and protein: A crisp paratha stuffed with raw onions, kebabs roasted on skewers, or chunks of paneer,” says Lahiri. 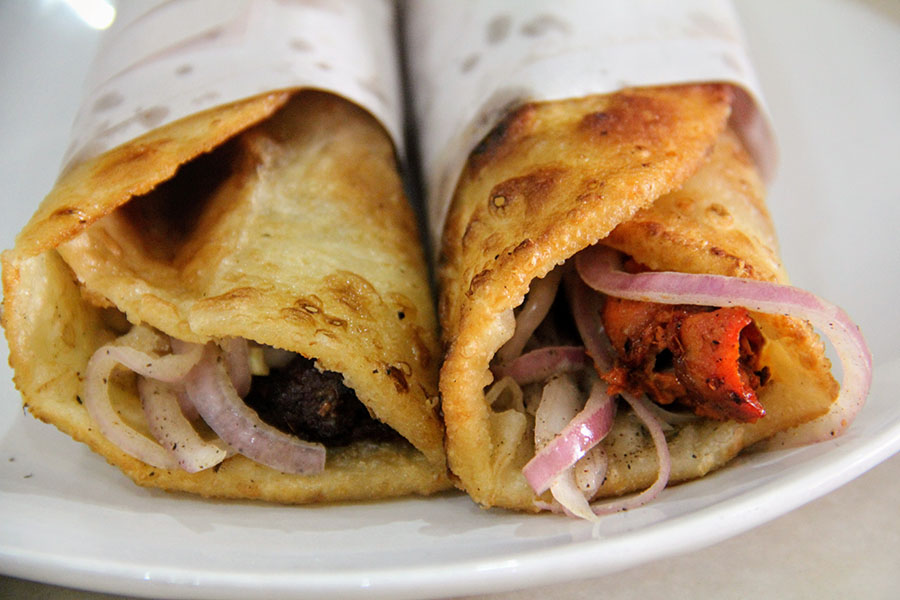 Mughlai food, from which the kaathi roll originates, was introduced in Bengal under Mughal emperor Shah Jehan in the 17th century, when Burdwan became a revenue collection centre for Bengal. Mughlai parathas stuffed with kheema, and biryani were some of the most popular dishes at that time, and continue to remain so. Mughlai cuisine was also brought in from Awadh by its 10th and last nawab, Wajid Ali Shah in the 19th century. Many of these dishes also had Turkish and Afghan influences, from the spices to cooking methods. Our last stop is Flury’s, a stylish tea room
and confectionary shop that is a Kolkata icon from 1927, started by Swiss couple Joseph and Frieda Flury, and now owned by the Apeejay Surendra Group, who also own the Park Hotels. Located on Park Street, Flury’s was just a tea room to begin with and has since morphed into a large confectionary and restaurant famous for its breakfasts of Eggs Benedict and beans on toast. On offer are pineapple and chocolate pastries and cakes, rum balls, and a variety of confection. Like Nahoum’s, Flury’s is an integral part of Kolkata’s foodscape, thronged by college students and families for decades. 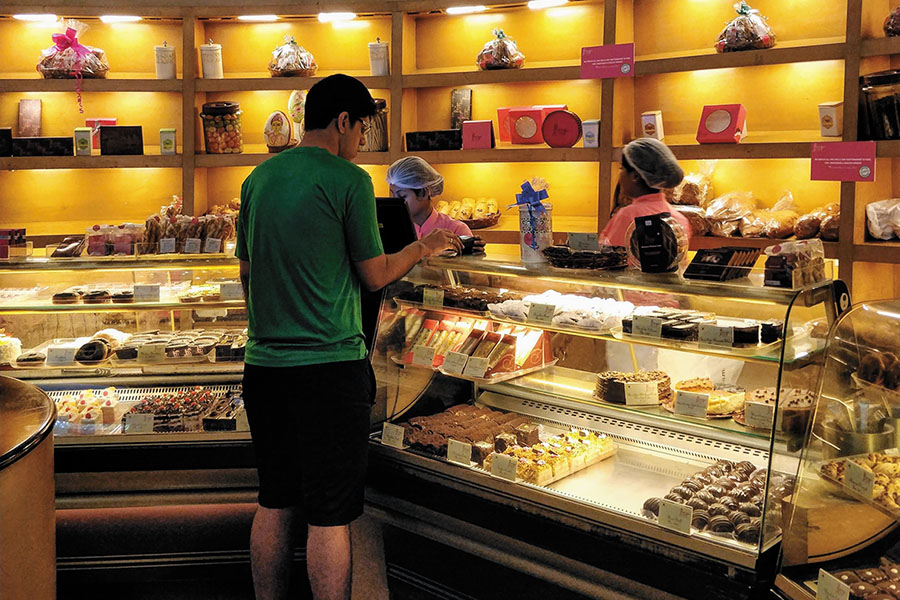 In the past couple of decades, Kolkata has adopted to new and contemporary trends in food and restaurants, with sweetmeat shops and fine dining restaurants both catering to increasing demand. Molecular gastronomy and fusion fare are also popular trends. At the same time, the Hakka Chinese restaurants of Tangra and Tiretti Bazar, as well as the traditional bakeries and kaathi roll joints, continue to have their loyal patrons for whom food is still cloaked in nostalgia. In Kolkata, the old and the new exist in harmony.

Tweets by @forbes_india
It's time to radically rethink the customer experience. Here's how to get started
NH7 Weekender: 10 years of making—and facing—the music