Travel: All around Abu Dhabi's watchtower 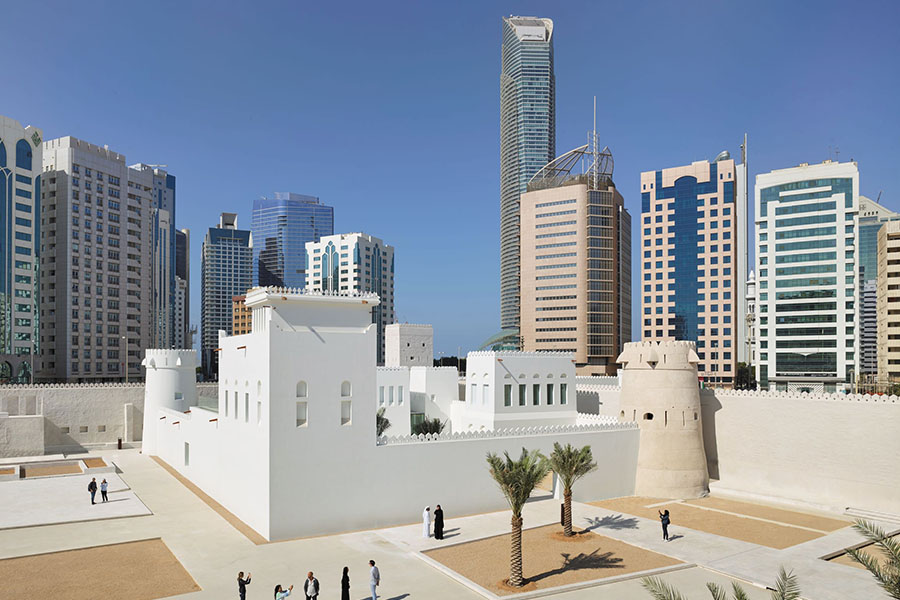 Under an overcast sky, and in the late evening light, the newly renovated and illuminated Qasr Al Hosn complex, in the glass-and-steel heart of Abu Dhabi, looked resplendent as we made our way into it. Inside, at the visitor centre, hung a black-and-white photograph from the 1970s, showing what the complex looked like then: A small fort with a watchtower, as tall as a three-storey building, standing in the midst of nothing but miles of barren land. The oldest structure in the Abu Dhabi island, Qasr Al Hosn, has witnessed the evolution of the city, including the union of the many tribes that roamed the lands, and the very formation of the United Arab Emirates.

Legend has it that in 1761, Bedouin hunters followed a deer from Liwa, an oasis in the south of Abu Dhabi, to the coast in the north, and discovered shallow water beds under the sand. Word spread fast, and soon the area transformed into a small fishing village, the genesis of Abu Dhabi. 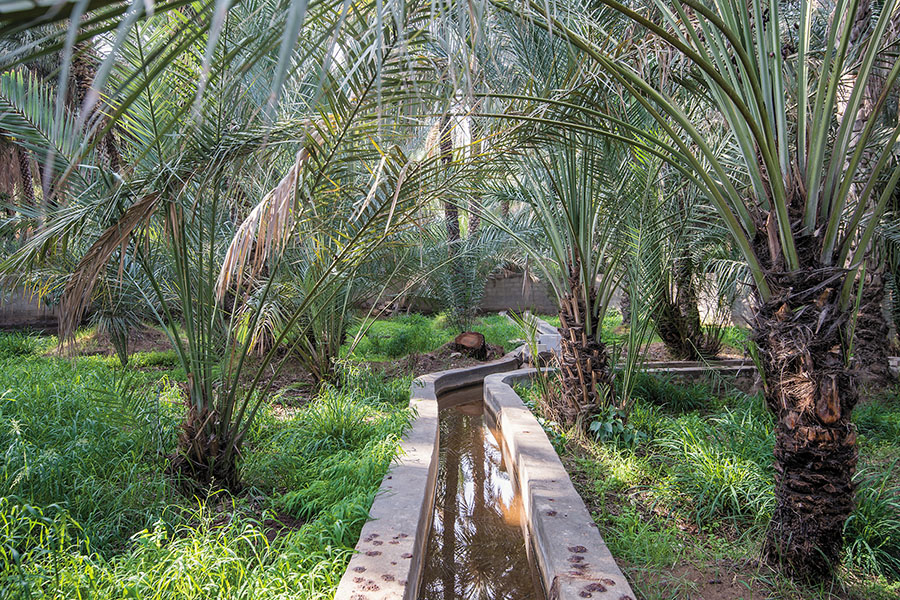 View of the Al Ain Oasis and its centuries-old irrigation system, which is the largest in Abu Dhabi; Image: Edwin Remsberg/ VWPICS/ UIG via getty images

Stories aside, Bedouins were nomads who moved with the seasons. For centuries, people of the Bani Yas tribe left their ancestral home at Liwa, a collection of oases at the fringe of the Rub Al Khali desert or the ‘Empty Quarter’, looking for fresh water and pastures for their animals, and to trade their dates. Documents suggest that the tribe possibly also visited the Abu Dhabi island periodically to fish, dive for pearls, and collect salt.

It was around 1760, that Sheikh Dhiyab bin Issa Al Nahyan, ruler of the Bani Yas tribe, established a permanent settlement at Abu Dhabi. Besides the availability of fresh drinking water, living near the coast offered many benefits over living inland: Fishing and pearling turned into flourishing activities, with the latter bringing in money to buy food, camels, and other necessities. Long-established trade routes passed close by, and brought their own advantages. Consequently, the sheikh ordered a watchtower to be built to protect the area’s rich natural resources, and control coastal access to the island. All these factors convinced Sheikh Dhiyab’s son, Sheikh Shakhbut bin Dhiyab to move the tribe’s seat of rule permanently from Liwa to Abu Dhabi island in 1795. He added more towers to the one his father had built, turning Qasr Al Hosn into an imposing defensive enclosure, and used it as his home and military headquarters. Abu Dhabi was on its way to slowly transforming from a sleepy fishing hamlet into a prosperous town. 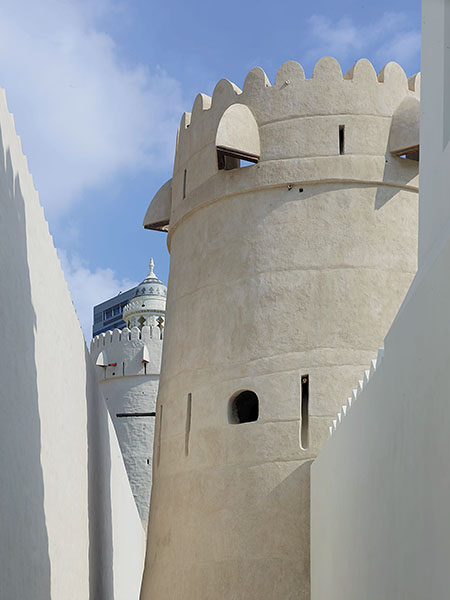 As I looked at the immaculately preserved watchtower, with its smooth cream exterior, I marvelled at its simplicity and significance. I realised that history needn’t always be represented by grandiose structures. For, this watchtower, built of palm tree logs, coral and rocks from the nearby ocean, was a symbol of humanity’s endurance in conditions that don’t support life, but inhibit it. Its establishment was a vital turning point in Abu Dhabi’s story; for if the seat of power had not shifted to the coast, the city’s history would possibly have been very different.

Inside the Qasr Al Hosn complex, exhibits in the rooms of the Inner Fort trace the evolution of the complex from being a modest outpost to becoming the epicentre of Abu Dhabi. Films, archival materials, larger-than-life photographs, interactive exhibits and audio stories take visitors on a surreal and captivating journey through the harsh realities of the desert, the life of the hardy Bedu, and their changing realities. Despite the glitz of modern Abu Dhabi, the city’s history was not always on a steady upward curve. With the Great Depression of the 1930s shaking up powerful economies around the world, the First World War, and the growth of commercial pearling, it faced a period of immense hardships. It was also then that speculations were rife about Abu Dhabi having large oil reserves, and private corporations showing interest in drilling them. In 1939, the first concession to oil companies was given by Sheikh Shakhbut bin Sultan Al Nahyan to begin explorations. A part of the proceeds were used to build a new palace enclosing the Qasr Al Hosn fort, tripling the size of the original site. The new palace catered to the growing administrative needs of the city, including more space for police and customs departments. But the benefits of oil exploration took their time coming, with the first discovery being made only in 1958. The discovery of oil, however, changed the history of Abu Dhabi, and the fortunes of its people forever. Qasr Al Hosn welcomed a steady stream of visiting dignitaries, oil company executives and politicians. It remained in the spotlight till 1966, when power was transferred from Sheikh Shakhbut bin Sultan Al Nahyan to his brother, Sheikh Zayed, who ruled over and lived in Al Ain, located about 160 km away from the island city. Then, Qasr Al Hosn faded into oblivion.

After a restoration project undertaken by Abu Dhabi’s Department of Culture and Tourism that lasted for more than a decade, Qasr Al Hosn opened its doors to visitors at the end of 2018. People can now walk through the very rooms that once housed the members of the ruling Al Nahyan family. The impressive Outer Palace is a two-storey building, with rooms opening onto a long veranda, designed to keep the structure cool. The white walls contrast beautifully against the dark wood of the windows, doors and the roof, built with palm logs, as the dim, diffused lighting turn the corridors into spectacular sights. The restored rooms showcase what life in the palace was like, including sleeping arrangements, the tradition of drinking gahwa (Arabic coffee), the importance of a majlis (council), and the games children played. As we exit the building, I turn around to look at the watchtower that heralded the history of Abu Dhabi. The magnificent Qasr Al Hosn, which once dominated the arid landscape for as far as the eye could see, now stands dwarfed amidst the city’s gleaming skyscrapers.

For a larger, and older, slice of Abu Dhabi’s history, we drive to Al Ain. The birthplace of Sheikh Zayed, who was the Ruler’s Representative in Abu Dhabi’s Eastern Region in 1946, Al Ain’s tree-lined avenues lead to more than 40 historical sites. Our first stop is the Al Ain Palace Museum, Sheikh Zayed’s home till 1966. A sprawling structure built in 1937, the palace offers a glimpse into the life of the ruling family, and the way in which everyday affairs were conducted. Although it is called a palace, the structure, influenced by Bedouin traditions, is functional rather than ornamental in design. The complex includes terracotta-coloured buildings, amid large grounds with gardens of cacti and palm trees, and a well. What stands out among them is Sheikh Zayed’s majlis: A carpeted room adorned by a crystal chandelier, traditional floor seating along the walls, and a centre table with a dallah and coffee cups. A leader who was always in tune with his people, Sheikh Zayed ensured the palace had a large open tent where he met tribal leaders, and shared meals, coffee and poetry with his countrymen.  Our next stop takes us further back in time, to the very beginning of Al Ain. In Arabic, ‘Al Ain’ means ‘the spring’. For centuries, the city’s spring-fed irrigation system has provided water to its people and the nomads who passed by. Falaj, an ancient irrigation method that comprises a network of water channels, continues to distribute water from the surrounding Al-Hajar Mountains to the farms below. There are strict, age-old rules about how the water is to be shared and used. Spread over 3,000 acres, the Al Ain Oasis has over 1.78 lakh date palm trees, producing over 100 varieties of dates, sectioned off into small private farms. Paved pathways run between the farms, demarcated with low stone walls and wooden doors. On one farm, we come across crystal-clear, cool water running through a narrow cement channel. Seemingly simple, this ingenious method of irrigation has been a lifeline for several generations. 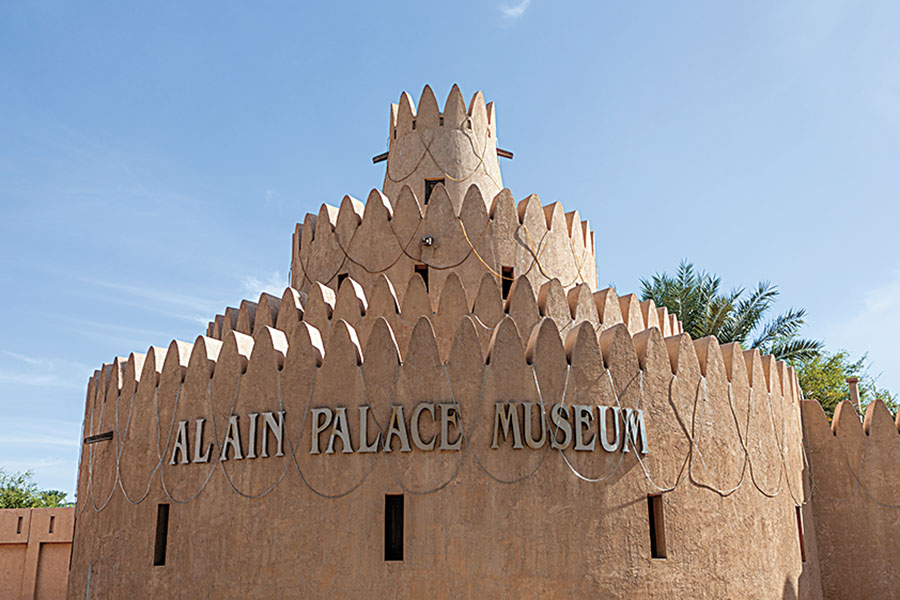 In June 2011, the sites of Al Ain were the first in the UAE to be listed as a Unesco World Heritage Site. These include the magnificent Jebel Hafeet mountain, the archaeological remains at Hili, the ancient settlement at Bidaa Bint Saud, and the lush Al Ain Oases. These sites together capture the ways in which people have adapted to the savage desert environment, and have lived in gruelling conditions from the Neolithic Period to date. They also mark the transition from their nomadic ways of life to settled communities.

Our last stop in Al Ain was the historic brick Al Jahili Fort, one of the largest in the UAE, built in the 1890s on the orders of Sheikh Zayed bin Khalifa Al Nahyan. Restored between 1986 and 1989, the fort won the prestigious Terra Award at Terra Lyon 2016, the 12th World Congress on Earthen Architecture. The grounds of the erstwhile summer residence of the ruling family is today a popular venue for cultural and heritage events. The impressive structure with its circular towers could easily be the backdrop of a movie, but what caught my attention was a permanent exhibition dedicated to the intrepid traveller, Wilfred Thesiger. A British military officer, explorer and writer, Thesiger is one of the handful of Westerners who crossed the Rub Al Khali desert, covering parts of Saudi Arabia, Oman, Yemen and the UAE, twice between 1945 and 1950, on camel and by foot. In the guise of a local, he accompanied Bedu tribesmen into tribal hotbeds—lands where very few foreigners had ventured into, and from where almost none had returned alive. It was on his second crossing, Thesiger met Sheikh Zayed and the two became close friends. Thesiger captured the time he spent with the Sheikh in a series of black-and-white photographs, which tell an indispensable account of UAE’s history. Thesiger, lovingly called Mubarak bin London (the blessed one of London), was lucky to have seen an aspect of the country that only a few have been privy to. In his highly acclaimed book, Arabian Sands, Thesiger chronicled his many experiences in the desert, particularly throwing light on the Bedouins and their legendary hospitality. He described a way of life that has now almost entirely disappeared. For most people, UAE’s history is a compilation of sketchy accounts of the lives of the Bedu, before the oil discovery. By restoring historical sites and retelling stories of the past, the government is now making an effort to celebrate the country’s humble beginnings. For, as Sheikh Zayed said: “Whoever has no past, has neither present nor future.”