What Denmark can teach us about sustainability

Denmark, long known for its design aesthetics, is using its expertise to integrate sustainability into everyday life 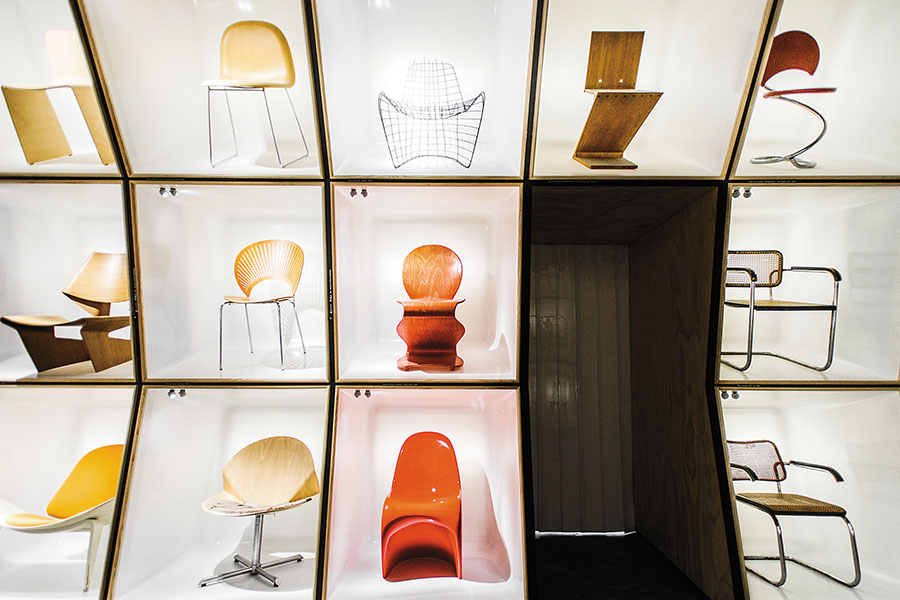 I looked at the pièce de résistance: Juicy, blood red pieces of beet glazed in plum vinegar, laid on a bed of gammel knas cheese spread on a piece of rye bread, peppered with buckwheat and sorrel. It looked like a piece of art. I was having lunch at Selma in Copenhagen, the restaurant bestowed with the Bib Gourmand award this year by Michelin. My meal for the day was the smørrebrød, an open-faced sandwich that the Danes have for lunch. But this wasn’t the traditional sandwich with toppings like herring or pork belly; this was a vegetarian take and, unlike the regular ones, the slice of dense rye bread was toasted. Using sustainable products like fresh vegetables from local suppliers, chef Magnus Pettersson has been creating new avatars of the regular smørrebrød in his kitchen at Selma. It was a simple meal with emphasis on good quality. Pettersson’s efforts in the kitchen and in sustainable practices are a contemporary addition to the Danish design scene—it cuts across textile, food, furniture, industrial design, fashion, architecture and more—which has been part and parcel of Danish lives since the age of industrialisation. Iconic designers and architects, such as Hans Wegner, Arne Jacobsen and Kaare Klint are just a few of the many visionaries with creative and innovative minds who were instrumental in shaping the Danish design industry. But today, the Danes are using their design expertise to seamlessly integrate sustainability into every aspect of their lives. “The good chair is a task one is never completely done with,” goes a quote by Hans Wegner. The chair, a piece of furniture with four legs and a seat, I assumed was the simplest of all. But at the Designmuseum Danmark in Copenhagen it was a revelation when I got to understand not just the science and complexity of chair designing, but also the many ways in which exemplary Danish designs have touched the lives of Danes. “We usually say Danish design is about evolution, not revolution. By this we mean that Danish design stands on a long tradition of improving international and historical furniture. Instead of erasing history, it builds on previous prototypes,” says Anne-Louis Sommer, museum director and adjunct professor at University of Southern Denmark. “The so-called Klint-school had a big influence on what we call Danish design today. The idea was to take something good and make it better. Refining pre-existing furniture types, always with an eye for functionality and human needs.” 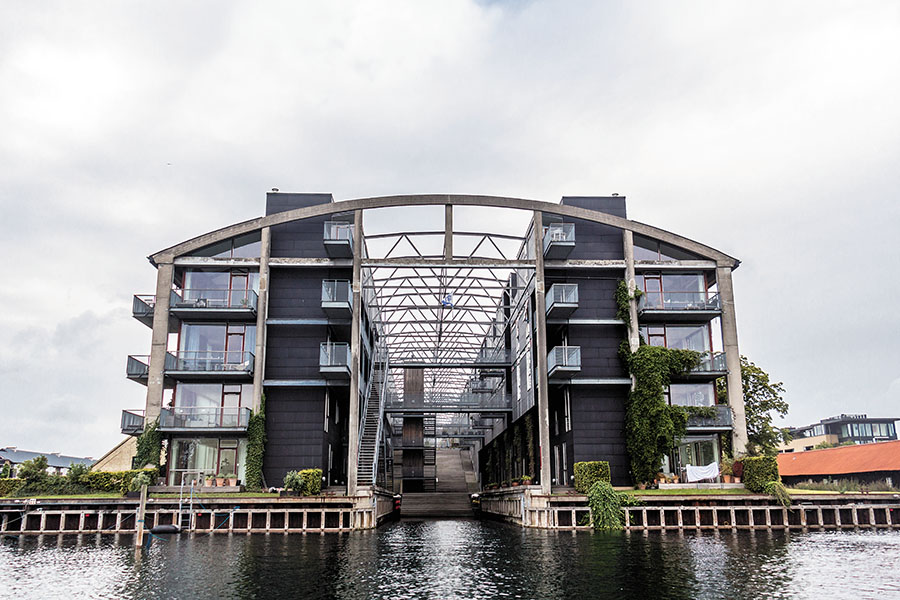 A torpedo factory in Holmen that has been converted into a residential neighbourhood
Image: Rathina Sankari

The social democratic movement in Denmark, with equal rights and a strong welfare system, was a major influence on Klint’s work. His focus on functionality and users paved the way for the future of Danish design. Sommer swears by the 1930’s Klint furniture in her office that she continues to use every day. “Danish aesthetics since the modern times are much simpler, and not as labour-intensive,” says award winning ceramist Inge Vincents, the maker of beautiful yet simple vases, mugs and bowls of translucent porcelain. “Craftsmen in the olden days were very well paid and you could work on ornamental pieces and they wouldn’t be that expensive. That’s not possible today. If I spend two weeks decorating a pot and I must pay rent and everything, nobody would be able to afford that pot. So Danish aesthetics are quite simple. It balances functionalism and beauty.” Vincents’ studio is located on Jaegersborggade, a gentrified street in the Nørrebro neighbourhood of Copenhagen. Her kiln is powered by wind energy and is thus sustainable. About 10 years ago, Jaegersborggade used to be a dodgy street that was avoided by locals and dominated by drug peddlers. But today it is a multicultural residential area with artisan shops and restaurants.

(Clockwise from left) Manfred’s, a restaurant on Jaegers-borggade, is committed to sustainability, natural wines and high-quality ingredients; items from a glass-blowing workshop located at Reffen, an organic street food market in Copenhagen; about 45 percent of Copenhagen residents cycle to work
Images: Rathina Sankari

Denmark has consistently been ranked as one of the happiest countries in the world. The local term for it is ‘hygge’, which describes a feeling of contentment, warmth and cosiness in the perfect ambience, probably with candles, a fireplace and blankets. Dinner at a restaurant with a loved one, catching up with friends, curling up with a book and coffee, are all examples of hygge. Design contributes indirectly to this feeling of wellbeing because of the way in which it is integrated into regular lives. Meik Wiking, CEO of the Happiness Research Institute, writes in his book The Little book of Hygge: “Danes are aware of the decoupling of wealth and wellbeing. After our basic needs are met, more money doesn’t lead to more happiness.” Denmark’s welfare model is designed around the wellbeing of its citizens. Their working hours are restricted to 37 and a half hours a week, contributing towards a better work-life balance. While they pay high taxes, they receive social security, free education, universal health care and a universal pension. Good food, coffee and confectionary are other factors attributed to hygge. “Cakes are part of Danish culture and hygge gets better with cake and coffee. Here we serve coffee by the pot, and you cannot share it,” says Marianne Stagetorn Kolos, owner of the 149-year-old ever-busy confectionary La Glace in Copenhagen. “The idea is for you to sit, relax and enjoy.”

“Design plays a major role in our lives. We invest time and money to set up cosy homes. Everything is thought through—the lamp in the corner, the rugs, the pillows on the couch. It’s a big thing for us,” says Ditte Nytofte, my host in Copenhagen. “We save money to buy good quality things, like the hand-painted porcelain products of Royal Copenhagen, which was founded in 1775. Second-hand products are also sold and bought by Danes through the DBA app.” The significance of design finds reflection even in the country’s transport and travel infrastructure. For instance, in Copenhagen, where 45 percent of residents cycle to school and work—parents ferry their children in cargo bikes—the city’s infrastructure includes cycle tracks that are clearly segregated by curbs. The Cycling Embassy of Denmark also works with cities across the world to design cycle-friendly spaces and develop cycling infrastructure, reducing congestion and pollution. 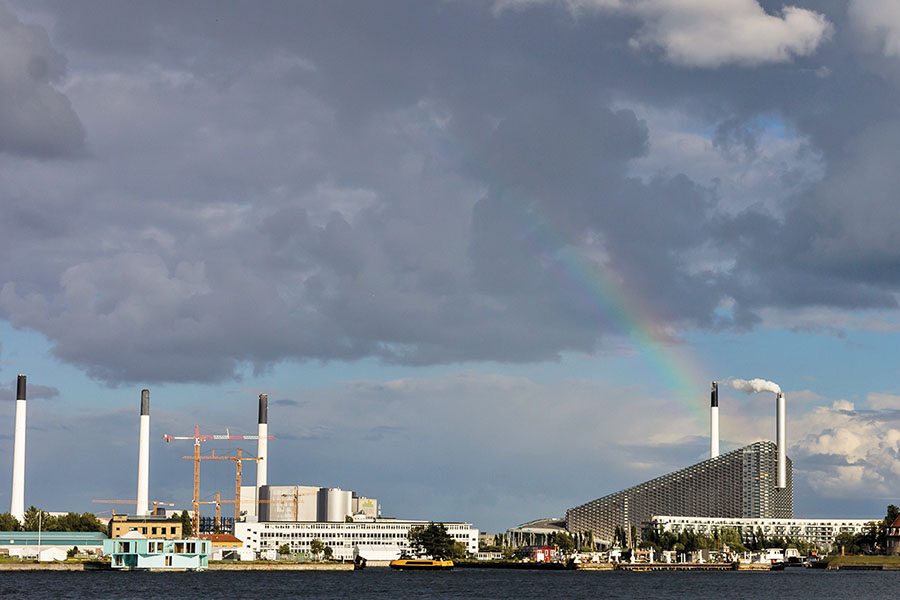 Sustainability is a big thing in Denmark, and customers today insist on sustainable products,” says Rikke Ullersted, an industrial designer from Aarhus, which was 2017’s European Capital of Culture. Co-founder of Upcycling Forum, Ullersted reuses scrap materials like wood, leather, glass from various industries to design furniture, interiors and glassware. “We are including recycling in the chain of design,” she adds. The concept of recycling and repurposing extends well beyond products and encompass entire spaces for living and recreation. Take, for example, the transformed industrial peninsula of Refshaleøen, where I spot a chimney puffing out white smoke. This is the iconic, decade-in-the-making waste-to-energy plant called CopenHill, which was recently opened to the public. Built by the Bjarke-Ingels Group, a global network of architects, designers, urbanists, landscape professionals, interior and product designers, researchers and inventors, the plant is capable of converting 440,000 tonnes of waste into clean energy in a year. Pollutants and particles are filtered out before the gas is released from its chimney. The power plant’s roof houses an artificial ski slope, hiking trails and the world’s tallest climbing wall. 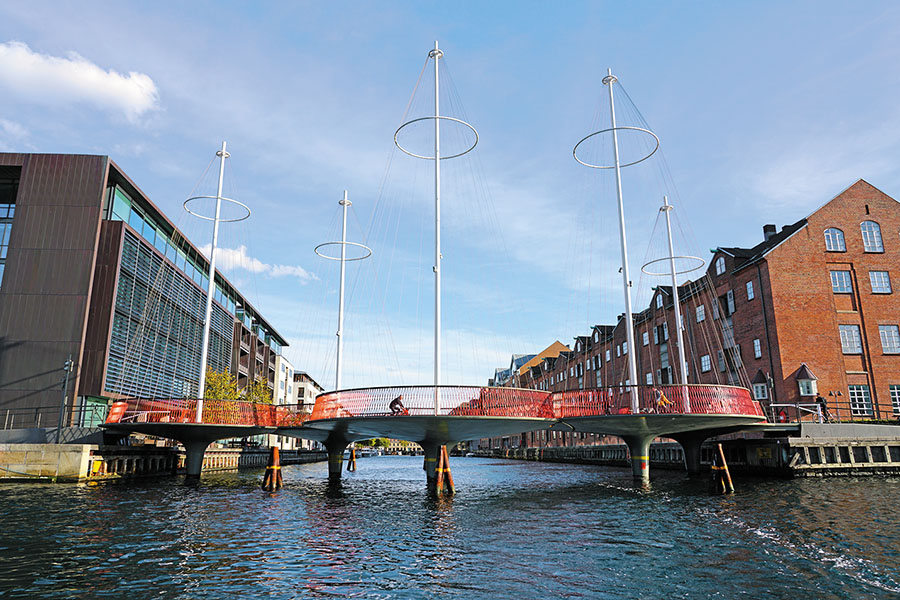 The Danes have managed to integrate urban planning, innovation and sustainability with their social fabric, as is demonstrated by Holmen, a former naval base, where a torpedo boat factory has been converted into a residential area. A single home in this project has a living area, kitchen and dining space on the lower floor, and a bedroom on the upper floor. With internal docking stations for boats, boat slips and parking spaces, it was an uber cool structure to live in.  Denmark’s approach to design is evident in everyday architecture, such as the Cirkelbroen Bridge, a pedestrian bridge spanning the southern mouth of Christianshavn Canal, and designed by Olafur Eliasson. With five circular platforms and wire masts that resemble a ship’s rigging, it is meant for people to pause and reflect. As I walk towards Tivoli Gardens, the world’s second-oldest operational amusement park that opened in 1843, and the inspiration for Walt Disney’s Disneyland, I wonder how seriously the Danes must take their fun moments. No surprise then that the world’s oldest operational amusement park—called Dyrehavsbakken, it opened in 1583—is also in Denmark, in nearby Klampenborg. My hygge moments with Denmark continue. The writer was in Denmark on the invitation of Wonderful Copenhagen

Tweets by @forbesindia
Bias-busting algorithms: can AI help VCs diversify their deals?
'Workers must be entrepreneurial in the age of automation'