David Nash: If you're ill, don't wait for the 'doctors'; do something about it yourself

JX Group’s David Nash talks about what made him give up the status and security of a Western corporation for the uncertainty of a newly-formed, Far Eastern, international oil and gas business 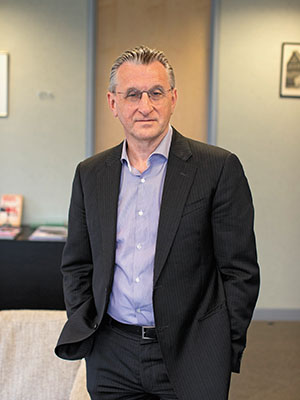 Image: Matt Dunham / AP Photo for Forbes India
David Nash has been in the oil industry for nearly 40 years. He worked for Shell and BP for 18 years before joining Mitsubishi Oil in 1993. Following the merger with Nippon Oil, he became executive director of the company’s upstream, London office and in 2010, after a further merger to create the JX Group, he was made an executive officer of the Upstream Corporation. He is the only foreigner on a Japanese E&P board and has associations with Japan that go back almost 40 years

I was a keen conceptual geologist. I worked with inspiring people in Greenland trying to understand the nature of the earth at its beginning. I loved building models to explain and predict things—and still do now. Artists don’t have a monopoly on imagination. But I was then, as I am now, a realist, and Britain in the 1970s was losing the luxury of knowledge for knowledge’s sake, so I applied to Shell for a job on their international staff. In those days, the selection process for such a post was exceptionally rigorous. They were looking for people with what they called “helicopter quality”. It was 1975. I had 24 interviews.

In one, that included my wife, we were asked whether we would “drink South African sherry”. These were the days of Apartheid and protesting youth—political correctness had not been massaged into the population! Shell was still in its “colonial phase”, and was measuring cultural tolerance with a trick question. I passed the test, mainly out of innocence, but unbeknown to me it was useful preparation for what was to follow.

The 10 years with Shell gave me the best technical apprenticeship in the industry at that time. Anyone wishing to make an impact in the oil and gas business must develop the skill of communicating with technocrats. But there was a catch: An unspoken condition of employment that you ‘did what you were told and in return Shell provided you with a life’.

After six months in The Hague, my family was grass widowed—sent back to the home base country—and I was despatched as the company representative to oversee the first drilling offshore North Yemen and then, in full view of the Tigrayan Liberation Army, offshore Ethiopia. In nine months, I saw my family three times. I never questioned it; I was becoming a neo-colonial—part of the Shell Army.

Maybe as a reward, I was sent to Japan in 1977. That changed my life. It was then, and remains now, a place of alarming contrast for a Westerner. Either you were fascinated by it, as I was, or you retreated, as many did for three years into the American Club in Tokyo.

Postings to Oman and Tunisia followed but there came a time when my ideas about my plans and Shell’s began to diverge. In 1984, I quit and did what few had done then, but many have subsequently: Transferred to a rival, in this case BP.

BP welcomed me in as a manager. I was fortunate; I was given three very challenging jobs. In Norway in 1989, I found myself model-building again, but this time focusing on the psychology of project problem solving, an area few wish to discuss openly and even fewer professionally analyse. But this was a bad time for BP; it had reached the geriatric stage and was entering into survival mode. There was no time for innovation from a ‘blow-in’.

I had reached the seminal moment in my business life. I didn’t want to be diverted into some indirect role, however well remunerated. I wanted to carry on doing what I enjoyed: Finding and producing oil and gas but also something else. The modelling and conceptual thinking of my student days had become refocussed to an equally challenging puzzle: How to make problem solving organisations work better.

It was a desperate time for everyone as the company contracted and a new order established itself. I learnt a big lesson then: “If you’re ill, don’t wait for the ‘doctors’ to help—do something about it yourself; it’s your life.” Someone told me to read Shakespeare—it had most of the diagnoses.

From my comfortable office in BP’s international HQ in west London, I sent a hagaki—a postcard in Japanese—to my old boss in Japan outlining the situation. He came back with a succinct reply and two company names. I eventually met, in a central London hotel, the chairman of one of those companies, a wonderfully imaginative and inspiring man called Kikuo Yamada. There was an instant bond between us—he had a vision and wanted me to be part of it. I took a taxi down the M4 motorway, back to Stockley Park and resigned, with little thought about pensions or share options.

That was 1993. What was it that made me give up the status and security of a Western corporation for the uncertainty of a newly-formed, Far Eastern, international oil and gas business? The answer was simple: Opportunity. Not financial—I have never been convinced that accumulating money as the main goal was worth much effort—but the opportunity to make a long-term impact: To say at 60, “I shaped something.”

I learnt a lot about myself in those early years after the change. When you come out of corporate life you are a child, albeit with a very specific skill. I didn’t know what an ATM was! I’d never done a tax return. I knew nothing about computing and my knowledge of my own industry was horribly compartmentalised. Suddenly, you’re thrown back on your own resources and you learn to measure the amount of risk you’re comfortable living with. Discovering how channelled I had become by corporate life and how much I had to learn was a shock—a great shock! But there was also a chance to think about all the assumptions and relationships in my life. A lot goes unaddressed when you are corporately cocooned for 18 years. I realised that I was a sort of closet entrepreneur, trying to survive in a corporate framework. I even discovered the condition had a name, intrapreneurship.

It was the start of a second life—of not only learning new things but also taking charge and deciding what mattered. Most of all, I had to take responsibility for the whole business. And suddenly everything I had understood about project management and the importance of integrative thinking came flooding back, but with one hitch: It was no longer theory; it was live and demanded results. There was also the question of how such ideas could be accepted in a conservative Japanese corporate structure.

The answer to that, up to now, has been to allow the two approaches to co-exist and learn from one another, albeit in different locations. Also the theme of cultural tolerance came roaring back. In 1977, I’d noticed that to open a door in Japan you often had to turn the key in the opposite direction to the way it’s turned in the West. It’s not wrong, it’s just different. That anecdote reveals something simple but profound about how to live between East and West, as I have been doing for the past 20 years. Sometimes the Japanese way is better, particularly when it comes to the manufacturing business. Other times, the Western approach wins out. Tolerance is only meaningful if it is accompanied by mutual learning.

What great discoveries have I made about improving project management? It’s not a question of discovery, but one of priority. Despite elegant expositions in the technical press and by global consultants of how we develop effective organisations, what is often lacking is our willingness to go beyond structure to explore the critical interpersonal issues that lie at the heart of effective communication and creativity. As technocrats, we often avoid the in-depth analysis of how people effectively communicate with rules and regulations backed up by documentation. There is little point in a job description of people’s roles and reporting relationships if they can’t work together.

The oil and gas business today is as much a victim of this as any industry, except that the numbers are often bigger and the consequences of error more serious. Massive overruns in capital projects have become endemic and while we spend huge amounts engineering the physical structures, our investment at creating teams that work effectively are trivial in comparison. At the root of almost every project failure in my experience is the unspoken issue of poor interpersonal design. Organisational process and interpersonal intelligence are still not the forte of the technocrat nor the market-driven CEO.

And where am I today? From a broom-cupboard office in the City of London in 1993, it took ten years to establish credibility, then a further ten to find the right project and build the right structure. Now, it will take another ten years to execute a multi-billion dollar investment programme and bring through the return. That is oil and gas. Unless you are willing to commit on that time scale you won’t succeed.

And what do I mean by succeed? Certainly not make a few bucks for one or two individuals that exit early. That contributes nothing of importance. Real success is knowing that one contributed to the supply of oil and gas into society—without that nothing works and we will have no time to build the new energy sources the world will need before the Fifth Decade.

Grand as all that seems, the greatest threat trying to achieve that goal of an uninterrupted supply of energy for as long as possible will not be finding the technical or commercial solutions—the oil and gas industry has a track record second to none in meeting all those challenges, and will in the future. Where we will be most likely to slip up will be in building culturally smart organisations that employ the right people in the right place at the right time, and throughout allow the intrapreneurial spirit to flourish.

(As told to Rani Singh)

Tweets by @forbes_india
Alok Kejriwal: I was being called a broker when I was the innovator and pioneer
Snapshots of the Fortnight (May 15-30)