Inderpreet Wadhwa: It was like driving a train even as the tracks were being laid

Inderpreet Wadhwa, founder of Azure Power, says the idea has always been to support communities and maximise returns for all stakeholders, and not just focus on capital returns 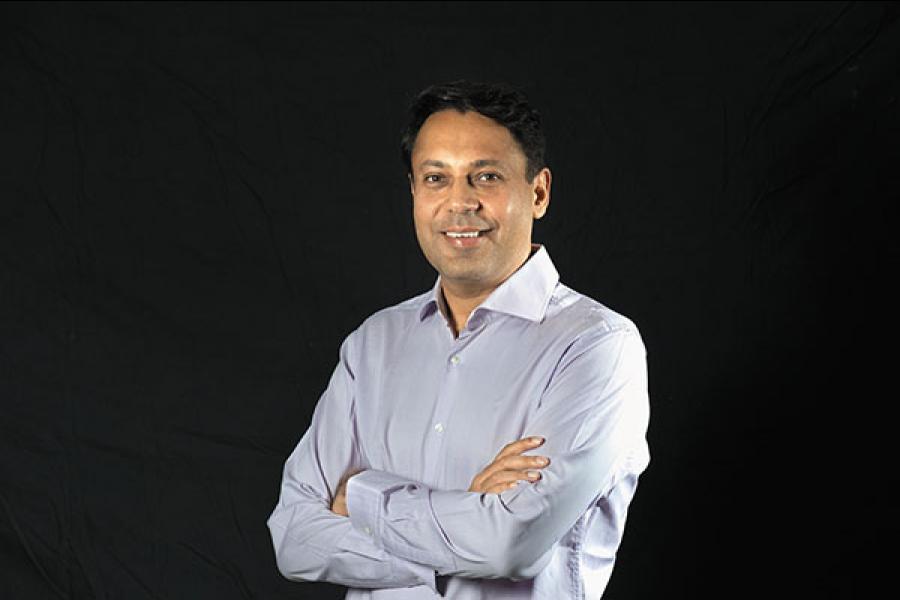 Image: Amit Verma
There were few real takers for solar power when Inderpreet Wadhwa started a small 1 MW project in a border town in Punjab. His company, Azure Power, today has a capacity of 55 MW across three states. The projects are a mix of bulk and more recently distributed power produced from rooftops in Gandhinagar. He is going strong and promises to become the lowest cost solar energy producer in the world

I like many good things, this too started with a movie. It was an unsettling one though; a documentary that had created as much buzz as a Hollywood blockbuster. But unlike commercial flicks, An Inconvenient Truth had forced many viewers to pause and think. It moved me, a software professional in Silicon Valley, and it turned out to be my “How can I make a difference?” moment. I began my research and found empirical evidence that India needed cleaner, cheaper and distributed alternatives to coal power. Our environment is not regenerative and 20 percent of the carbon we put in will stay there for the next million years. With abundant solar resources, need for electrification and meeting peak load shortage, solar power was the obvious choice. It also offered climate change mitigation for a country with over 1 billion people

Those were boom years for the development of alternative energy technologies in the world. Millions of dollars were going into funding R&D—a lot of it for solar power.

Most companies were bullish about the European solar market, saying Germany and Spain were the best places to put up projects due to their incentives. I used to wonder how Germany could be the best place for solar energy, when it gets only 250 days of sunlight and already had a surplus of energy.

I took a trip to Delhi in 2007. Although I had left India only a decade ago, the deprivation of people was moving. I knew that I just had to create sustainable employment for people in rural India. With 350 days of good sunlight, solar power will have a huge prospect in creating jobs and providing clean energy. Power supply in many rural areas was intermittent, with heavy reliance on diesel and kerosene, which led to health problems. I created a business plan, bootstrapped and Azure was formed.

However, not everyone was convinced. My father, who worked for more than 40 years in a regulated sector in India, said my path is likely to be extremely challenging. I had very little access to capital, and this was during the economic crisis of 2008. The plan was to develop solar energy plants in places where there was huge need and little infrastructure.

Since I was born in Amritsar and had studied there, I wanted to start from there. I approached the district magistrate to identify districts where Azure could put up a plant. We started meeting panchayats. Not too many of them understood solar power or Azure’s model. Solar power generation had been tried in Punjab, by installing water pumping solutions for agriculture, and had failed. We were able to figure out the problems. The farmers needed different amounts of power at different times of the year.

The earlier projects were installed mainly from subsidies, and those who installed them were generally not around to operate them. Our model was to install and run the project for at least 25 years, guaranteeing availability of power and eliminating all upfront capital costs. We would be there to make sure the power is delivered.

My US experience enabled me to raise capital from leading investors like Foundation Capital, Helion Ventures, IFC (World Bank investment firm) and German development bank DEG. Azure is different from many of our competitors: We are not in the business of selling solar power plants; we only sell power. Even in Gandhinagar, for the rooftop solar projects, we make investments to build, own and operate the facilities for 25 years.

Finally, Awan, a town on the border with Pakistan, said they were willing to give it a try. But what happened next confirmed that I needed persistence and conviction to be successful. We started leasing land so the community could benefit from rentals. We had to get dozens of permissions. Most agencies had never approved a solar project our size, and were considering the clearances like those for a large conventional power project.

It was only towards the end that we realised our transmission line would have to cross a railway track, and getting it across would likely take two to three years. And I was running against a deadline that was two months away!

We could access the site from beneath the elevated tracks and requested permission for that. But the process involved conducting a feasibility study, finalising a technical design, calling for a tender and selecting a contractor. All this could take years.

I reached out to the chief engineer of Northern Railways through the US embassy in Delhi. It helped that I have US citizenship. He understood us, and let us go ahead with the work. The caveat: The Railways would design the solution, and this would take 45 days. We had little option and agreed, but were thrilled.

While they designed the project, we went ahead and finished everything else. We laid our cables right up to 10 feet of the track on either side. This meant we had to cross only 20 feet once the Railways finished their design. Forty-five days later we got their approved design and completed the job.

In hindsight, it’s amazing how we did it. It was like driving a train even while the tracks are being laid. The lesson probably is if a project makes economic sense, then with conviction and persistence all things end well; and if things are not well, then its not the end.

We believe Azure is different because we develop projects with inclusive growth in mind. Our returns are not purely measured in terms of internal rate of return (IRR) on capital alone, it’s positive IRR for all stakeholders. All our projects our profitable and are strictly on commercial terms.

But the idea is to support communities and not to, for instance, acquire land at the cheapest possible terms to maximise capital returns alone.

I figured out early in my journey that making it work will need us to discard some of the conventional rationale and think differently. Azure is a socially conscious enterprise and inclusive growth for all stakeholders is the mantra for success. Something I wish more enterprises should adopt.

(As told to Cuckoo Paul)

Tweets by @forbesindia
Sujata Keshavan: We believe the Taj Mahal is beautiful because we are taught so
VC Sehgal: We entrepreneurs are a bit insecure, that's why we control