VC Sehgal: We entrepreneurs are a bit insecure, that's why we control 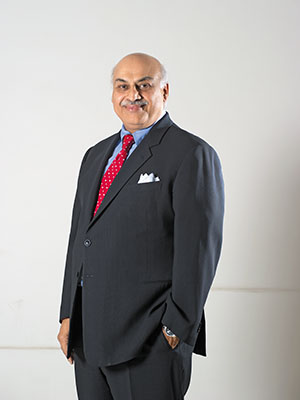 Image: Amit Verma
VC Sehgal is the chairman of the $5.4 billion Samvardhana Motherson Group, one of India’s largest auto components companies. In his 40-year-long career, Sehgal has dabbled in various businesses—silver trading, selling housing cables and polyester chips. But he finally found his calling in manufacturing wiring harness for automobiles. An Australian citizen, Sehgal travels more than 300 days in a year meeting customers across the globe

The year 1994-95 was very interesting because there was a directive from the Indian government which wanted us to localise fast. We had to travel to Japan a lot because our main collaborates [Sumitomo] were there and I found that travelling was increasing more and more. Then we had Maruti requesting us to localise very intricate parts which were under patents, so there were a lot of conflicts and I had to also travel a lot to Europe and look for second sources. Because I was travelling a lot, I appointed one person who would be responsible for the whole company and every aspect/problem would first be reported to him


We didn’t have mobile phones or emails back then, so it took time to communicate. So, one had to trust the people one was working with.

When I would come back from these trips of 8-10 days, I would find the company a little better, in a little stronger position because being a professional he was really focusing on every aspect of the company. That got me thinking that if travelling is going to increase—and my family had also moved to Australia—maybe it is a good thing that I withdraw from my position as a managing director, maybe for a year, and let the professional handle the day-to-day running of the company. The rest is history.

This model of management did phenomenally well and drove the company to a particular point where one could see the company’s professional thinking in contrast to a shareholder way of thinking. The results showed that our share price had gone up much more than I had ever imagined. Also, people were being taken out from Motherson and given the responsibility of a COO at the smaller ancillaries. We had set up these ancillaries by ourselves because at that time there was hardly anybody who wanted to become an ancillary to Motherson. Because I don’t have a brother and my son was just about 11 years old at that time, we were kind of forced to allow the professionals to take over.

I remember another instance that could also have planted the seed in my mind—to change. Again in the early 1990s, we were interviewing for some particular position and a kid walked in. I asked him, what is your aspiration in life? His was to have my chair. I thought, “My god! He wants to replace me!” I was probably not very intelligent at that time and I let him go away. Then this thought got in my mind that some guy will come over and take my position. When somebody did come and take my chair, the freedom that I felt, the ability to start thinking about the growth of the group—I felt very sad that I hadn’t given this kid a chance. I was so insecure. I just wanted to get rid of him immediately.

This is a huge dilemma an entrepreneur faces. In a very funny way, we entrepreneurs are a bit insecure. That’s why we control. And whenever you start controlling, the first thing that gets controlled is growth. Growth is change and change is permanent. So we start to control change itself. The last 40 years of my experience have taught me that one must trust. You will have bad experiences where one or two people will let you down, but even the five fingers on your hand are not the same, so you have to trust. You can’t say that only my family members are the ones I can trust. And you have to empower the professionals. If you don’t, you are in the same boat as before.

You empower professionals by giving them executive control. The company will stand by his decision—that to me is empowerment. So, if today my marketing chief or second or third rung goes to talk to a customer, the carmaker is absolutely sure that Motherson is going to stand by whatever this seemingly kid guy is saying. That’s empowerment—where people take decisions for the benefit of the company. Also, a professional is able to take pragmatic decisions, like reject a batch of products because otherwise the company will suffer. The entrepreneur, on the other hand, will think five times whether he should reject it or not. If it is a write-off, a professional will take it on his chin and move on. An entrepreneur, believe me, will look at lovely words like ‘chala lo’ and ‘chala lenge’ [‘Lets run with it’ and ‘we will run with it’].

In Motherson, we do not believe in hiring our uncles and aunties and brothers and sisters and the logic for that is, you have a very difficult time questioning somebody who is related to you. But you can question the professionals.

Since the professionals were doing such a good job, the only thought in my mind was to bring in new ventures, new plants. This is where the professionals sometime have difficulty: How do you spend shareholders’ money; how do you show value being created by that? So the shareholder has to be with you and say, ‘I know we are going to take a loss for three years, doesn’t matter, let’s go for it because it makes sense.’

When we acquired Visiocorp’s mirror business in 2009, just after the Lehman crisis, it was a very tough situation for us. German laws will definitely put you behind bars if you feel that the company is not cash liquid and you fail to inform the government about it. A professional could take the company into liquidation if he felt that the cash position is not good. The only person I could trust who, despite the challenges, would not do something like that is my son Laksh Vaaman Sehgal. I told him beta it is very difficult for me to ask a professional to take over this thing because he will hesitate and he will be in a kind of dilemma if tomorrow he feels that the cash position is tight. So, either I become the CEO or you become the CEO. But Vaaman was very courageous. He was just 26 at the time. He took over that responsibility very well and I must commend the team at Samvardhana Motherson Reflectec (SMR) globally who accepted such a young person and also saw it as a commitment from the family that we are not going to let you down in any way. I am very proud of Vaaman for this.

My role in the company, which I am teaching my son as well, is actually 4C: Customer, collaborator, cash/capital requirements of the company and control of vision. Vaaman is a fine grown-up guy and if you see the last results of SMR, you will see that he has delivered very well. His team is motivated and they have done a remarkable job. But Vaaman was not very hands-on and had given freedom to the professionals—in his wisdom he thought it was enough. He had picked up a lot of manufacturing experience globetrotting himself, so he resigned as the CEO of SMR as of April 1, 2013, and has gone on to become the vice-chairman of the company so he will exactly follow what I have been doing for the last so many years.

The good thing is that he sees tremendous value in what I do. But he has to make up his mind by himself. I am there as an advisor to him but I don’t force him. The whole idea is to talk together, enjoy working together—we have a good discussion sometimes over a drink, which makes it even more worthwhile.

India’s ancient history actually tells you that it is a mistake building a business solely with the idea that your children can inherit it. When you ask your child to take over and if he is not capable, then something has gone wrong. The whole Mahabharata is written on that theme.

I think if Vaaman is capable he will certainly have a chance to control his portion of shares. I think as an entrepreneur, one likes to own 100 percent of the shares, but as you become a public company, your holding keeps coming down. If the shareholders think that Vaaman has the capability to do it, he will definitely take over. And if it is only because he is my son, I don’t think it is the right way to look at it. It is my job as a father to give him all the opportunities so that he learns. The rest is evolution. Evolution teaches us that if you are weak, you are not there.

Tweets by @forbesindia
Inderpreet Wadhwa: It was like driving a train even as the tracks were being laid
Living Powerfully with Detachment