Echoing the Biden campaign, and tightly coordinated with the speeches and imagery of his first day in office, the music insisted on unity after division, hope after pain 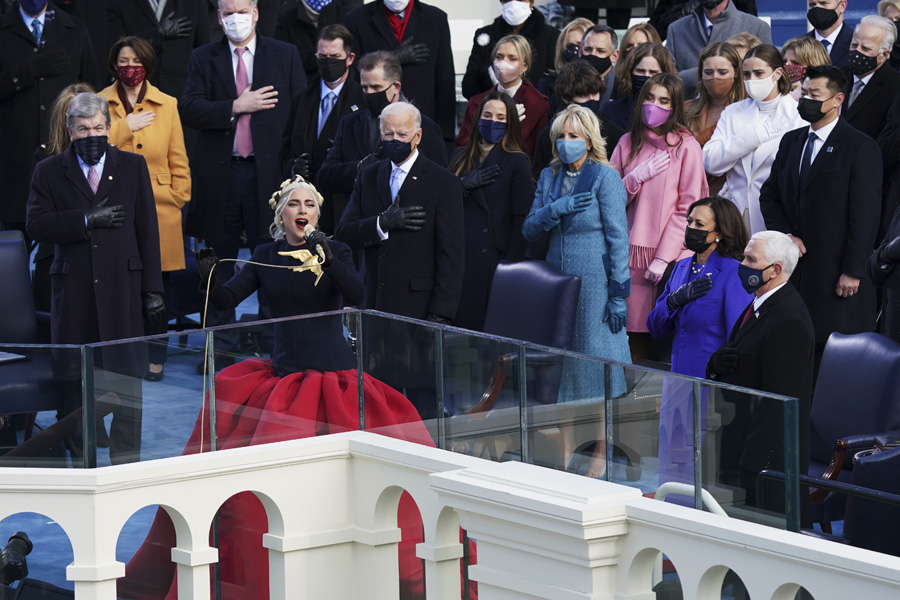 Lady Gaga sings the national anthem during the presidential inauguration of Joe Biden at the Capitol in Washington on Wednesday, Jan. 20, 2021. Artists including Bruce Springsteen, Demi Lovato and John Legend tried to bring together an America that couldn’t gather in person, and irony and bombast were banished. (Erin Schaff/The New York Times)

Throughout President Joe Biden’s inauguration, music sent every possible signal of unabashed earnestness. Irony was banished; so were arrogance, bombast, triumphalism and confrontation. Echoing the Biden campaign, and tightly coordinated with the speeches and imagery of his first day in office, the music insisted on unity after division, hope after pain.

It opened with Bruce Springsteen, alone with a guitar at the Lincoln Memorial, singing about migration, mutual aid and welcome in “Land of Hope and Dreams.” It was a reprise of a song by Springsteen, a careerlong voice of workers’ dignity and a steady supporter of Democratic candidates, that played at President Barack Obama’s farewell address.

Biden’s events presented music as balm and consolation, as a peace offering and a promise of community, even as the pandemic — along with security concerns after the Jan. 6 Capitol riot — made a public gathering impossible. At “Celebrating America,” he and his vice president, Kamala Harris, spoke briefly from inside the Lincoln Memorial, where Biden said their inauguration was “not about us, but about you.”

Earlier that day at the swearing-in ceremony, Lady Gaga wore a voluminous red dress, a navy jacket and large brooch with a dove holding an olive branch as she sang “The Star-Spangled Banner,” starting it with a foursquare declamation and grand vibrato hinting at Kate Smith but making her way toward gospel-R&B melismas before she was done. Jennifer Lopez, wearing suffragist white, crescendoed from a soft-rock “This Land Is Your Land” to a fervent “America the Beautiful,” shouting part of the Pledge of Allegiance in Spanish and slipping in a phrase from her own “Let’s Get Loud.”

The afternoon’s “virtual inaugural parade” strove to recapture the endearing roll call at the Democratic convention. It offered quick glimpses of musical, military and athletic groups from all of the states, along with rhythmic delights from Puerto Rico and the U.S. Virgin Islands. Andra Day sang “Rise Up” on a rooftop overlooking a Black Lives Matter mural in Hollywood, accompanying a skating routine by young viral-video star Kaitlyn Saunders on Black Lives Matter Plaza in Washington, and the New Radicals played their one hit from 1998, “You Get What You Give” — a favorite of the president’s son Beau Biden, who died of brain cancer in 2015. The show’s giddy finale was a deftly edited, crowdsourced, TikTok-style montage of hundreds of people flaunting their moves to Martha and the Vandellas’ Motown classic “Dancing in the Street.”

During the prime-time “Celebrating America,” another on-screen contingent, predominantly health care workers, joined Demi Lovato as she belted Bill Withers’ “Lovely Day”; a time-stamped cutaway showed the Biden family watching and dancing along, live, at the White House. It was as close as the public could gather in pandemic America.

The songs and titles weren’t subtle. From Nashville, Tyler Hubbard (a member of Florida Georgia Line) and Tim McGraw sang “Undivided,” which insists, “I’m tired of looking left or right/So I’m just looking up.” Jon Bon Jovi scratchily sang the Beatles’ “Here Comes the Sun” with a band on a pier in Miami. Justin Timberlake and Ant Clemons predicted “Better Days” with a band inside Stax Museum in Memphis; then they joined a gospel choir singing on the street with a bluesy train whistle cutting through — a glimpse of a particular American locality.

During the inaugural events, there were multiple renditions of “Amazing Grace,” the English hymn that became a Black spiritual in the United States. It’s a song about finding redemption and salvation; it’s also a staple at funerals. Garth Brooks sang it at Biden’s swearing-in, inviting home audiences to sing along. Cellist Yo-Yo Ma played it (in a solo medley of hymns with “Goin’ Home” and “Simple Gifts”) on “Celebrating America.” And Lori Marie Key, a nurse from Michigan who sang the song at a hospital in a popular online video, sang it again devoutly and exultantly on Tuesday at the Lincoln Memorial Reflecting Pool, in a ceremony recognizing the 400,000 U.S. deaths from COVID-19.

The newest and sultriest songs on the Biden inaugural stages weren’t sung in English. DJ Cassidy, who had performed at both of Obama’s inaugurations, brought his “Pass the Mic” video format to both the virtual parade and “Celebrating America,” presenting performers singing along to their recorded hits. During the virtual parade, he had members of Earth, Wind & Fire singing and playing “Sing a Song,” and Kathy Sledge of Sister Sledge, along with songwriter-producer Nile Rodgers and three remote choirs, performing “We Are Family” — declarations of solidarity.