Nearly a decade after it began the project, Alphabet said Thursday that it pulled the plug on Loon because it did not see a way to reduce costs to create a sustainable business 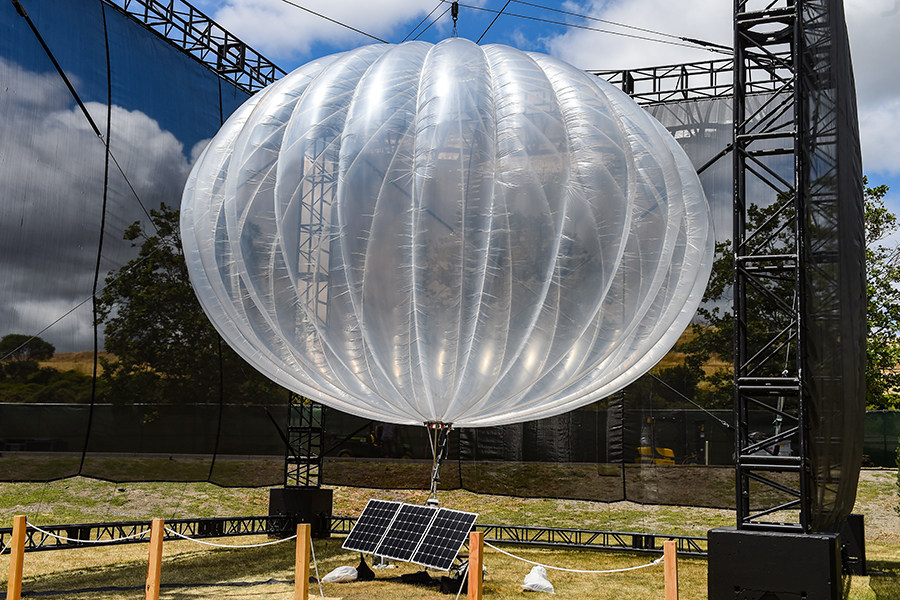 A balloon of Google's "Project Loon" to supply remote areas with Internet connections is seen at the developer conference Google I / O in Mountain View, California, 21 May 2016. The project is to now be under a new boss who is an experienced manager from the satellite industry. Photo: Andrej Sokolow/dpa | usage worldwide
Image: Andrej Sokolow/picture alliance via Getty Images

COVID-19 patients and health professionals in an intensive care unit set up in a former Volkswagen plant near Port Elizabeth, South Africa, Nov. 22, 2020. Two small new studies suggest that some variants of the coronavirus may pose unexpected challenges to the immune system, even in those who have been vaccinated — a development that most scientists had not anticipated seeing for months, even years.
Image: Samantha Reinders/The New York Times

OAKLAND, Calif. — Google’s parent company Alphabet is shutting down Loon, a high-profile subsidiary spun out from its research labs that used hot-air balloons to deliver cellular connectivity from the stratosphere. Nearly a decade after it began the project, Alphabet said Thursday that it pulled the plug on Loon because it did not see a way to reduce costs to create a sustainable business. Along with the self-driving car unit Waymo, Loon was one of the most hyped “moonshot” technology projects to emerge from Alphabet’s research lab, X. “The road to commercial viability has proven much longer and riskier than hoped. So we’ve made the difficult decision to close down Loon,” Astro Teller, who heads X, wrote in a blog post. Alphabet said it expected to wind down operations in “the coming months” with the hope of finding other positions for Loon employees at Alphabet. The idea behind Loon was to bring cellular connectivity to remote parts of the world where building a traditional mobile network would be too difficult and too costly. Alphabet promoted the technology as a potentially promising way to bring internet connectivity to not just the “next billion” consumers but the “last billion.” The giant hot-air balloons, made from sheets of polyethylene, are the size of tennis courts. They were powered by solar panels and navigated by flight control software that used artificial intelligence to drift efficiently in the stratosphere. While up in the air, they act as “floating cell towers,” transmitting internet signals to ground stations and personal devices. Google started working on Loon in 2011 and launched the project with a public test in 2013. Loon became a stand-alone subsidiary in 2018, a few years after Google became a holding company called Alphabet. In April 2019, it accepted a $125 million investment from a SoftBank unit called HAPSMobile to advance the use of “high-altitude vehicles” to deliver internet connectivity. Last year, it announced the first commercial deployment of the technology with Telkom Kenya to provide a 4G LTE network connection to a nearly 31,000-square-mile area across central and western Kenya, including the capital, Nairobi. Before then, the balloons had been used only in emergency situations, such as after Hurricane Maria knocked out Puerto Rico’s cellular network. However, Loon was starting to run out of money and had turned to Alphabet to keep its business solvent while it sought another investor in the project, according to a November report in The Information. The decision to shut down Loon is another signal of Alphabet’s recent austerity toward its ambitious and costly technology projects. Under Ruth Porat, Alphabet’s chief financial officer since 2015, the company has kept a close watch over the finances of its so-called Other Bets, fledgling business ventures aimed at diversifying from its core advertising business. Alphabet has aggressively pushed its “Other Bets” like Waymo and Verily, a life sciences unit, to accept outside investors and branch out on their own. Projects that failed to secure outside investment or show enough financial promise have been discarded, such as Makani, a project to produce wind energy kites that Alphabet shut down last year. That austerity has been a notable change from a time when units like X, which had been a favored vanity project of Google’s co-founders Larry Page and Sergey Brin, had autonomy to spend freely to pursue ambitious technology projects even if the financial outlook remained unclear.

Tweets by @forbesindia
Get the best enterprise solutions from architect and author Praveen Kumar Donepudi
At Biden's inaugural events, the music was earnestly reassuring