Hospital admissions have begun rising and the impact of the Delta variant across the country has already incited alarm in other European countries including Germany, which has introduced a travel ban

By Stephen Castle and Benjamin Mueller 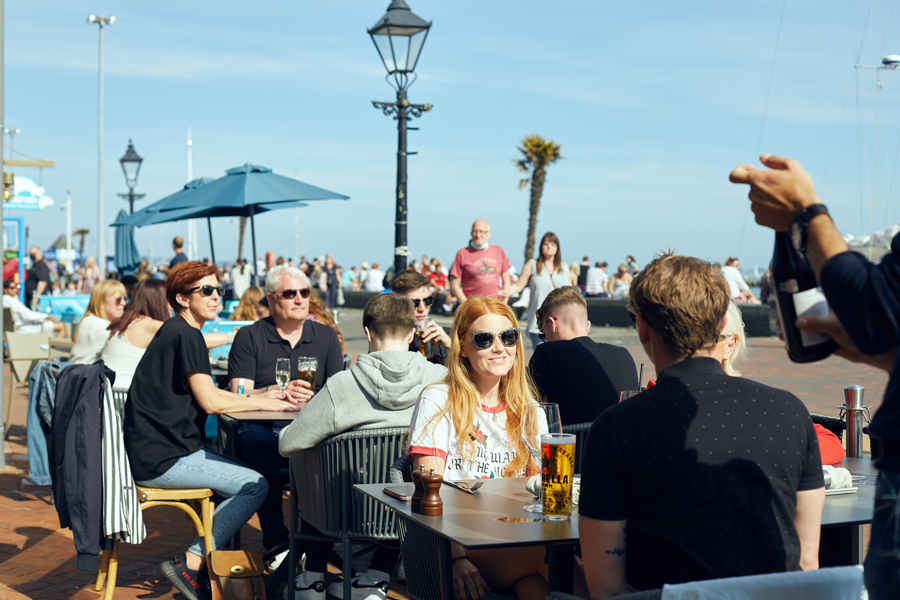 People sit at outdoor tables at a cafe on the waterfront in Poole, southern England, on May 30, 2021. Under the current rules, pubs and restaurants can operate but with limited capacity. (Suzie Howell/The New York Times)

With a rapid and successful vaccine campaign on track, the path seemed clear not long ago for Prime Minister Boris Johnson to scrap all of England’s coronavirus rules on June 21, ending curbs that he resisted imposing in the first place.

But on Monday, Johnson postponed by four weeks the moment dubbed “freedom day” by the tabloids after a spike in cases of a highly transmissible new variant that may cause more serious disease than earlier variants. Restaurants and pubs in England, while open, will still have to observe social distancing rules indoors, limiting capacity, and nightclubs and theaters will remain firmly closed.

The decision, which will be reviewed in two weeks, sent a warning to the world that even well-vaccinated nations remain at risk and angered a noisy caucus of libertarian lawmakers within Johnson’s own party.

At present, overall new cases in Britain are averaging around 8,000 per day and are doubling every week in the worst affected areas. Hospital admissions have begun rising. And the impact of the Delta variant across the country has already incited alarm in other European countries including Germany, which has introduced a travel ban.

In Britain, around four-fifths of adults have received one dose and more than half have had a second shot. But people with only a single dose remain susceptible to cases of the Delta variant — more so than to earlier versions of the virus, scientists said. And an unabated surge of infections in younger, unvaccinated people could ignite a dangerous wave of hospitalizations.

That has helped convince many epidemiologists that lifting restrictions now could, in a worst-case scenario, produce as many hospital cases as in the first wave of the pandemic, overwhelming the National Health Service just as it is trying to cope with a backlog of procedures that were postponed during the pandemic.

At a news conference at Downing Street, Johnson said it was sensible to wait “just a little longer” before lifting the curbs, noting that “even if the link between infection and hospitalization has been weakened, it has not been severed.”

Expressing confidence that he would be able to remove the remaining restrictions on July 19, Johnson added and that “at a certain stage, we are going to have to learn to live with the virus and to manage it as best we can.”

Since first being sampled in Britain almost four months ago, the Delta variant, which was initially detected in India, has swept across the country, outcompeting even the dangerous Alpha variant that took hold earlier. Recent studies show that 96% of new cases now are from the Delta variant.

And the variant now appears to be outpacing other versions of the virus in parts of the United States and Canada, too, with some scientists saying that they expected that trend to continue.

Scientists remain at odds over exactly how serious a threat it poses in Britain, however, with some arguing that the most dire predictions about rising hospitalizations underestimate the effect even the current level of vaccinations have on breaking the link between the number of new cases, hospitalizations and deaths.

The optimists could point to reassuring news Monday from Public Health England: Full courses of the Pfizer-BioNTech and AstraZeneca vaccines offer extremely strong protection against hospitalization in cases of the Delta variant.

Public Health England said the figures were comparable to the performance of vaccines against the Alpha variant.

But there are still millions of people who have not yet received a vaccine. They are mostly under 50 and thus, even if they do contract COVID, are thought to be less likely to develop a severe enough case to require hospitalization.

Still, a big enough wave of infections could cause problems: A study from Scotland published on Monday in The Lancet found that people with cases caused by Delta were roughly twice as likely as those with Alpha to be hospitalized.

“The nature and timing of the transition from a major epidemic to living with COVID-19 was never likely to be straightforward,” said Mark Woolhouse, a professor of infectious disease epidemiology at the University of Edinburgh in Scotland. “The Delta variant has made the process considerably more difficult.”

Under Monday’s announcement, there will be a review of government COVID-19 rules on June 28 and, if the situation improves significantly, restrictions could be lifted on July 5.

But failing that, current curbs will stay in effect for two more weeks, except for a few minor relaxations like the numbers allowed at weddings.

The delay is intended to allow millions more vaccines to be administered, ramping up the second doses that appear to be critical in protecting against the Delta variant. In particular, the time between the first and second vaccine shots given to those 40 or older will be shortened, with all of that group offered two doses by July 19.

Tweets by @forbes_india
Work from home: This future of work may not be sustainable
Photo of the day: Dare to dine